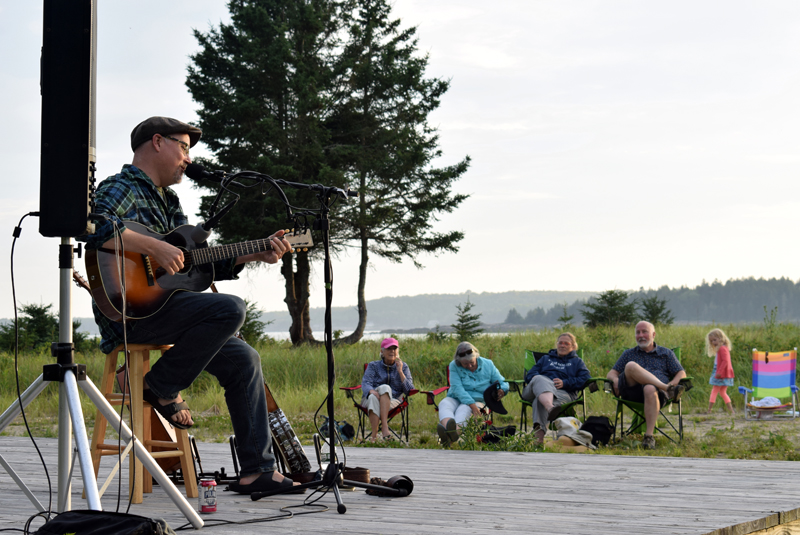 Jud Caswell plays a song on his guitar and sings at Pemaquid Beach during a fundraiser for the reconstruction of the Seagull Shop on Monday, July 12. More than $3,440 was raised during the event and the shop’s owners say they plan to reopen by late July or August. (Evan Houk photo)

The Seagull Gift Shop and Restaurant, the 83-year-old establishment at Pemaquid Point that burned last September, got some wings at a concert fundraiser with nationally recognized singer-songwriter Jud Caswell at Pemaquid Beach on Monday, July 12.

The owners of the beloved shop plan to reopen the brand new building by late July or August, according to co-owner Tim Norland.

Tim and Betsey Norland, own the Seagull Shop along with Brooke Cotter, who also manages the shop.

The Norlands attended a fundraiser at Pemaquid Beach where Seagull Shop staple Caswell performed and more than $3,440 was raised on Monday, July 12.

On Monday, Betsey Norland thanked Pat Porter for organizing the fundraiser and for all the people who have donated to the Seagull Rising effort that has been active on GoFundMe since shortly after the original shop’s destruction.

“It’s really nice for all these folks to turn out,” Betsey Norland said of the crowd of nearly 100 who gathered at the Pemaquid Beach pavilion.

She even received a four-leaf clover from one of the attendees, for good luck.

Tim Norland said the couple has purchased a property in New Harbor and have moved from their home in New Jersey to reside in Maine year-round.

Tim Norland said the construction crew at the new Seagull Shop has been somewhat held up by supply delays since starting the project in February but should be now able to work through to enable at least a soft opening by August, while employees get used to the new space.

“We’ll at least have takeout or something,” Tim Norland said.

Caswell put on a 1 1/2-hour mellow acoustic folk show with a 30-minute break between sets. The performance was accompanied by birds chirping, seagulls swooping, and the ocean surf pounding on the beach in the background. After the first song, Caswell marveled at the birds seemingly singing along towards the end.

During the performance, Caswell told stories about his songs, many of which are favorites from his album, “Live at the Seagull Shop Restaurant,” and reflected on his time at the shop and what made it so special to so many people.

“That’s the only place I’ve eaten where the clam chowder tasted like my mother’s,” the Maine native said to laughs from the crowd.

After its release in March 2020, the album shot to No. 1 on the Folk Alliance International chart and, in April, landed at No. 5 on the National American College and Community Radio Chart.

Caswell said the Seagull Shop provided a quiet and intimate room right on the ocean where he could play his favorite songs. He described the restaurant as “very Maine.”

Caswell then broke out the banjo for what he said felt like a kid’s song while writing it — the uplifting and jaunty tune, “That’s the Way We Climb.”

The snack shack, Mimi’s at the Beach, run by Tammy Legault, was busy throughout the entire performance, as people loaded up on chicken, fries, fish tacos, and fresh haddock sandwiches.

Caswell then ended his performance with an a cappella version of the traditional Irish goodbye tune, “The Parting Cup,” where everyone rose their drinks in the air for a toast.