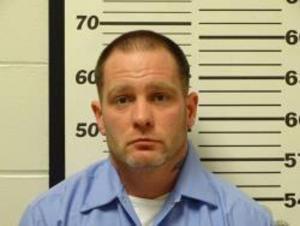 The Lincoln County Sheriff’s Office is continuing to search for a Wiscasset man after a standoff in Dresden on Saturday, Nov. 28.

Nathon A. Taylor, 41, has an arrest warrant out of Androscoggin County for a probation violation, according to Lincoln County Sheriff’s Office Lt. Brendan Kane.

Taylor was convicted of aggravated drug trafficking in 2016 and sentenced to seven years in prison with three years suspended, plus two years of probation, according to the Maine Department of Corrections.

The sheriff’s office responded to 353 Middle Road around 1:45 p.m. Saturday after receiving a tip that Taylor was there, according to Kane. When deputies knocked and identified themselves, they heard a male voice inside but no one came out.

Deputies surrounded the trailer and continued to call to the people inside through a PA system for several hours. They also attempted to call the occupants.

“Due to the nature of the warrants,” the sheriff’s office requested assistance from the Maine State Police Tactical Team, according to an LCSO press release. The Tactical Team arrived around 5 p.m. and took over the attempts to contact the people inside.

At about 7 p.m., “several” people came out of the home. Some said Taylor was still inside, while others said he had fled when deputies first arrived, according to the press release.

One of the people, Lynzi R. Rogers, 37, of Vassalboro, was arrested on a warrant for failure to appear in court in connection with a class C charge of drug possession. She was taken to Two Bridges Regional Jail in Wiscasset.

LCSO detectives obtained a search warrant for the home, identifying Taylor as the subject being sought.

After continued attempts to contact Taylor failed, tear gas was deployed into the home. Police then entered the trailer at about 10 p.m. and found no one inside.

No one was injured during the standoff, Kane said.

The Dresden Fire Department assisted law enforcement by closing a section of Middle Road, while the Wiscasset Ambulance Service provided an ambulance as a precaution. Police left the scene around midnight.

The sheriff’s office asks anyone with information about Taylor’s location to call the agency at 882-7332 or email Kane at bkane@lincolnso.me. A white man with blue eyes and brown hair, he stands 5 feet, 7 inches tall and weighs 176 pounds, according to the Department of Corrections.