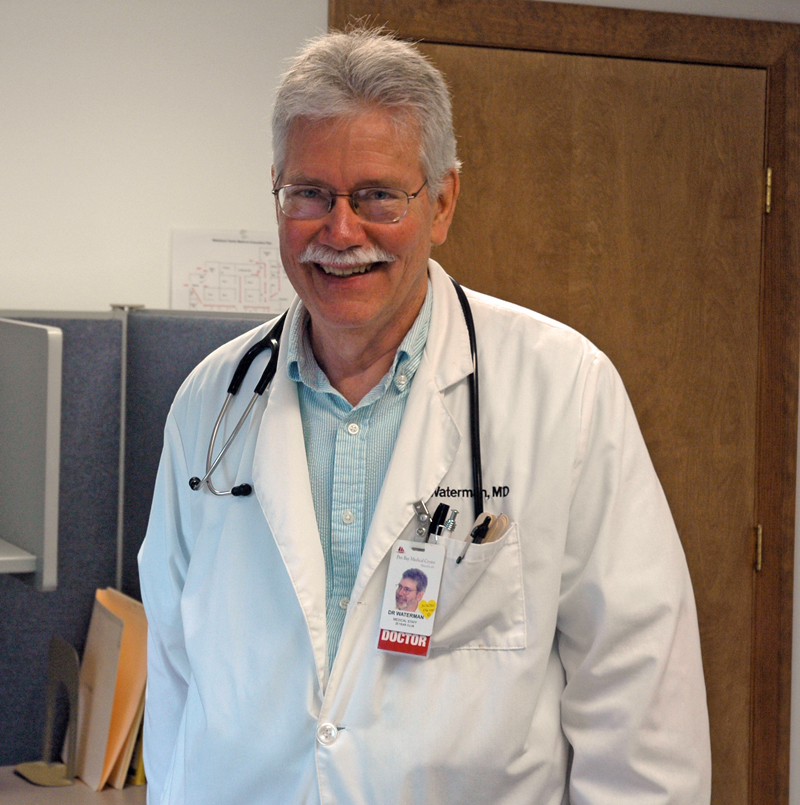 A second-generation family doctor is preparing to hang up his stethoscope and white coat after nearly four decades of practicing medicine in Waldoboro.

Dr. Jack L. Waterman will retire from Waldoboro Family Medicine effective July 28. He has been working in family medicine in Waldoboro since 1980.

After a three-year residency in Delaware, where he met his wife, Waterman spent his entire 37-year career as a primary care physician in the Waldoboro community.

When he started at Waldoboro Family Medicine, the practice was in a smaller building on Main Street. It moved to its present location on Mill Street in 1989.

Waterman grew up in Waldoboro and graduated from Medomak Valley High School in 1970, a member of the school’s second graduating class.

Waterman graduated from the Kansas City University of Medicine and Bioscience in 1977 and completed his residency at the Wilmington Medical Center in Delaware in 1980 before moving back to Lincoln County to join his parents’ practice.

“I came back to Waldoboro to join my parents in 1980 and I have been here ever since,” Waterman said.

Waterman said that when his parents were working as general practitioners, first in Friendship and then in Waldoboro, they assisted area residents with a wide range of medical services.

“At that time, small-town general practitioners did everything from house calls to delivering babies. When I started in 1980, we were still doing all that stuff and the days could be quite hectic,” Waterman said.

Waterman described his father as a “human dynamo” and said he grew up on North Haven during the Great Depression and was drafted into the U.S. Army while studying at the University of Maine.

Waterman said his father initially went through artillery and engineering training with the Army before being sent to medical school in Kansas, where he met Waterman’s mother.

After the war, the couple moved to Friendship before eventually moving to Main Street in Waldoboro.

Waterman said his father was drafted a second time during the Korean War and served in the U.S. Air Force at a base in Waterloo, N.Y.

Since he began practicing medicine in Waldoboro nearly four decades ago, Waterman said the role of the primary care doctor has changed markedly, with the range of day-to-day activities considerably constricted and pared down.

However, Waterman said his days are still full and varied.

“I think that’s what attracts people who come here or to communities such as Damariscotta to practice. There’s a lot to do and a lot of different things to cover. We’re always told, in theory, in family practice, we can handle 90 percent of things that come through the door,” Waterman said.

Waterman said one of the most rewarding parts of his work as a doctor in family medicine has been the relationships he has built with his patients.

“The lifetime relationships are special. Many of my patients have seen my father before me. One of the rewards is, you do get to travel life’s trail with people, through the good years and some of the bad times,” Waterman said.

Waterman described his day-to-day activities at Waldoboro Family Medicine as filled with intellectual stimulation, and refuted the preconception that primary care doctors only deal with everyday ailments like sore throats.

“We literally do see everything. The challenge is to try and recognize something serious or rare as soon as possible. A lot of conditions have the same symptoms. We are trying to solve problems as early and effectively as possible,” Waterman said.

Waterman said he tries to employ the golden rule through his work, treating others with empathy, the way he would like to be treated if he were in their position.

“You want to be as kind and humane as you can be,” Waterman said.

Waterman said he believes he will miss his role in the town.

“I’ll miss feeling like I was providing some important services to the community,” Waterman said.

He said his immediate plans are to take time to visit his sons, who live in North Dakota and Washington, D.C., and to pursue some of his outside interests, including cutting his own firewood, sea kayaking, reading, and pursuing his interest in music.

“During my teenage years I played drums in a local rock band. I got old drums in the basement and picked up the guitar along the way,” Waterman said.