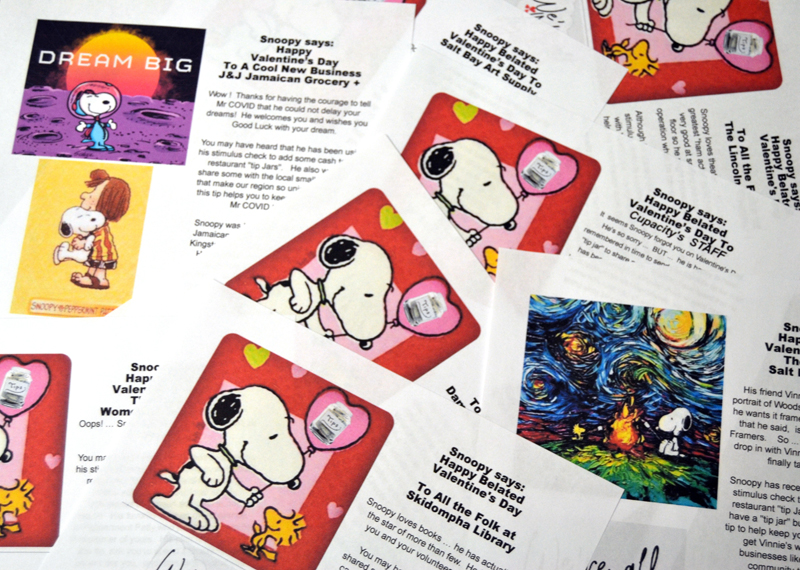 A collection of notes from “Snoopy” to local businesses. A local couple has been donating their stimulus payments to area businesses under Snoopy’s name. (Maia Zewert photo)

Since Valentine’s Day, local businesses have received cash donations with notes from the “Peanuts” character Snoopy. The couple behind Snoopy hopes their campaign inspires others to take similar action.

In keeping with the intent of their gifts, The Lincoln County News has agreed to keep the identities of the husband and wife anonymous and to refer to them as “Snoopy” and “Lucy.”

The couple has sent donations to more than 20 businesses, primarily in Damariscotta and Newcastle. The donations range from $25 to $100 and are usually accompanied by a note featuring the cartoon dog.

As their federal stimulus payments arrived, Snoopy and Lucy wanted to find a way to put the money to its best use. When they read articles about how people planned to use their stimulus funds, Snoopy said a lot of the responses were to pay down credit cards and other debt.

Inspired by Portland’s Valentine Phantom, who anonymously decorates the town with red hearts for Valentine’s Day, Snoopy and Lucy decided to give their money to the local businesses and organizations they frequent. Before the pandemic, the two ate out two or three times a week.

Their decision to adopt the “Peanuts” character as the mascot for their effort dates back to Snoopy’s school days, when he “adopted Snoopy philosophies” and was called “Charlie Brown” as he walked the halls.

Around Valentine’s Day, Snoopy and Lucy sent out their first batch of donations to King Eider’s Pub, the Newcastle Publick House, the Damariscotta River Grill, and more. Accompanying the donation was a picture of the fictional Snoopy and his friend Woodstock, along with a note wishing the business’s employees a happy Valentine’s Day.

“Snoopy’s stimulus check was doing no good sitting around in his personal bank account,” the note said. “He hopes that sharing it with the restaurant staffs who contribute so much to making Damariscotta/Newcastle such a great place to live will show how much their efforts to ‘hang in there’ are appreciated.”

Snoopy and Lucy’s mission went beyond eateries, however. Donations also arrived at Lincoln Theater, Skidompha Library, and The Lincoln County News as part of the first round.

Snoopy and Lucy tailored the message to fit the business. In the note to Salt Bay Art Supply, the couple gave a special shoutout to Salty, the shop cat. The note to LCN suggested using the funds to get some baked goods “as a treat for the coffee break after the next edition gets ‘put to bed.’”

“While it may not be an amount to make a big difference, when you spread it around, it can have a huge impact on the community,” Snoopy said.

The gesture has been met with joy, with many recipients expressing gratitude on social media.

“Whoever this anonymous Snoopy with his or her stimulus contributions to our tip jar is, you made our day and we thank you,” Cupacity, a downtown Damariscotta cafe, said in a Faceboook post.

Butter Up Cakes, a new bakery and cafe in downtown Damariscotta, shared a photo of the gift and note on its Facebook page.

“Thank you to whoever you are. … All of the tips in the jar (go) to the kids so they are very excited and trust me when I say they will spend it all downtown,” the post said. “Thank you for brightening their day, they are beyond excited.”

With the third round of stimulus checks heading into bank accounts, Snoopy and Lucy plan to continue their mission for as long as they can. They have not given to seasonal businesses yet, and they have enjoyed finding new businesses to support.

“We’ve learned of new places we hadn’t known about before!” Lucy said.

The couple hopes their story will inspire others to “live like Snoopy” and put their stimulus funds to good use as well.

“It’s been delightful,” Snoopy said. “If three people pick this up and do something positive, or if this can spark something, it would have all been worthwhile.”