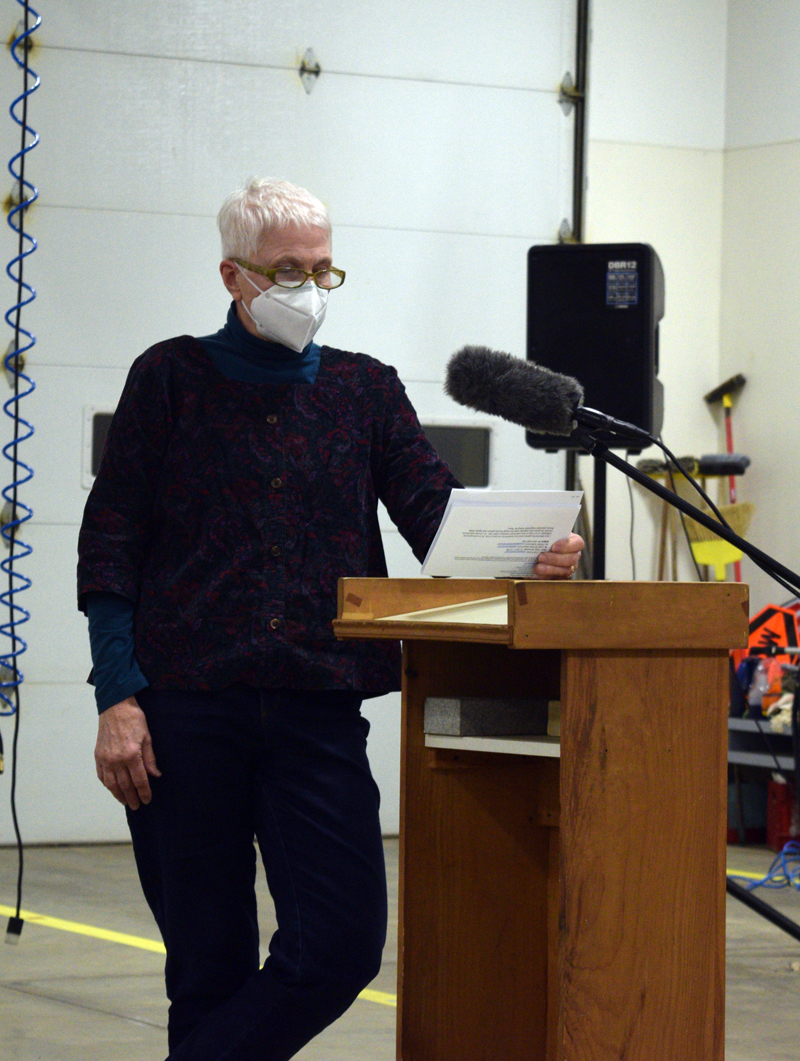 Alna citizens debated three articles on the warrant for a Dec. 14 special referendum ballot vote at a hearing on the evening of Monday, Nov. 15.

Residents discussed warrant article 3 first, followed by warrant Articles 4 and 5. Articles 4 and 5 were addressed together because they were both put on the warrant through petitions and Article 5 was petitioned in response to Article 4.

Article 4 asks the town to approve revisions to evenly distribute “authority and responsibility” and compensation among selectmen and establish staggered three-year terms for all selectmen.

Article 5 asks the town if it will create a committee to investigate possible revisions to the selectmen’s positions, should the fourth article be voted down.

Kate Papagiannis and Tom Aldrich submitted the petition for Article 4 to adjust Alna’s board of selectmen to match that of nearby towns in and around Lincoln County. In a list of 27 towns, only Dresden and Alna have a system in which the town elects a select board chair directly.

During opening remarks, Papagiannis argued that the current structure of the select board concentrates knowledge in one member of the board, which can be problematic in situations similar to what happened following Alna’s spring elections.

That is, former first selectman Melissa Spinney stepped down in April, leaving two inexperienced selectmen to lead the town.

“We may have another abrupt resignation, illness, or worse. We need to be better prepared,” Papagiannis said.

The petitioning pair suggests that by distributing responsibilities among selectmen, they will all be better prepared to operate should the board have a vacant seat.

Aldrich added they submitted the petition recently because the first selectman vacancy enables the town to make changes without impacting a sitting representative.

Former selectman Doug Baston submitted the petition for Article 5 in opposition to Article 4, and said during the Monday hearing that Papagiannis and Aldrich’s petition was submitted in an effort to by-pass the town’s legislative body, or the annual town meeting.

Baston also argued that the competing petition should be refused by the town’s selectmen for legal reasons and that the careful, methodical committee process for proposing changes to the select board outlined in Article 5 represent a far safer option.

“Most parts are poorly drafted, parts it’s illegal, parts it’s ill-advised, parts are confusing and contradictory… and every single part of it, since it’s not being enacted by an ordinance, can simply be struck down three months from now,” Baston said.

Baston was met with applause from some audience members following his presentation.

In response to Baston’s argument that Article 4 should not be on the Dec. 14 warrant due to legal issues, Second Selectman Linda Kristen read a letter from Suzanne Pilgrim, director of legal services with Maine Municipal Association, in which she stated that there are no legal deficiencies in Papagiannis and Aldrich’s petition sufficient to enable the selectmen to not put Article 4 before the voters.

Of those in favor of Article 4, Jeff Philbrick argued that a committee, as outlined in Article 5, is not necessary for revising the selectmen’s positions.

In 1993, the town changed the selectmen’s terms from one to two years without a committee, and Philbrick argued that the town does not need a committee for the current changes.

“We don’t need a committee to do this when all the research has been done; it’s straightforward,” Philbrick said.

Former selectman Ed Pentaleri argued that one important product of approving Article 4 would be establishing a written policy outlining how the town’s select board operates.

“The town’s current practice of granting much greater responsibility to the first select board member isn’t documented anywhere,” Pentaleri said. 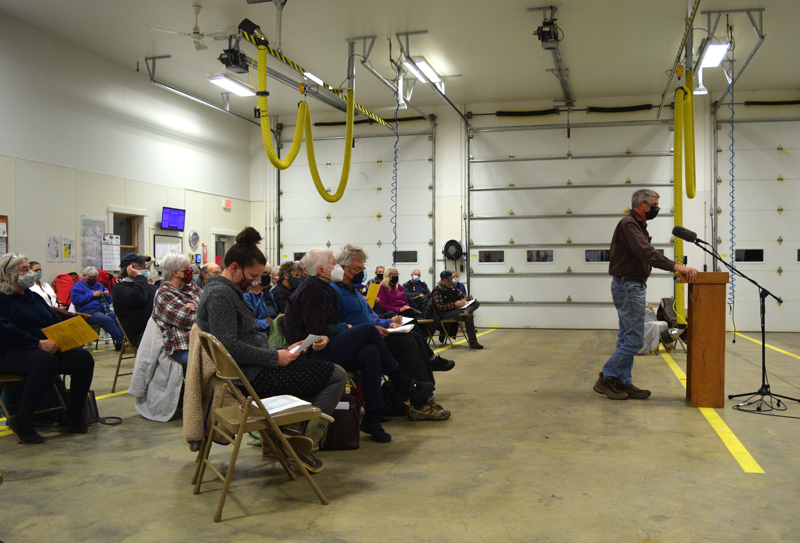 Former selectman Les Fossel speaks to petitioners and dozens of fellow Alna residents regarding the consequences of approving articles 4 or 5 on the Dec. 14 warrant at the town’s public hearing on Nov. 15. (Nate Poole photo)

Of those against Article 4, Fred Bowers expressed dissatisfaction with the process of holding a special town meeting and a secret ballot vote for the article, arguing that such steps should only be demanded for time-sensitive, emergency issues. He argued that to pursue changes to the select board through a committee would be far more fair and democratic.

Alna resident Ralph Hilton alleged that Papagiannis and Aldrich used town funds through the selectmen for their research.

“The thing that aggravates me the most is you using town funds, town resources, to do your research with the MMA and others that you worked through the selectmen to have them do,” Hilton said.

Third selectman Charlie Culbertson denied Hilton’s allegations following the hearing. He said that MMA only reviewed Papagiannis and Aldrich’s petition when residents raised legal objections at select board meetings after it was submitted.

Planning Board member Beth Whitney expressed support for Article 5. She said that she was not opposed to some of the proposed changes in Article 4, but objected to the flippancy with which the petition seems to address centuries old traditions in Alna.

“I’m going to vote against (Article 4) because I think we owe it to ourselves to take the time to explore all of the intended and the unintended consequences of this decision, before we jump into this,” she said.

Article 3 asks the town if it will transfer $25,000 from surplus to an “unforeseen contingencies” account, with the selectmen’s recommendation.

Town Treasurer Amy Stockford said that the warrant article is meant to cancel out the town’s budget overages.

According to slides projected during Stockford’s presentation, the town is currently over budget by about $9,980 in its computer and copier, tax assessing, and animal control officer accounts.

Some residents, including Fire Chief Mike Trask and Melissa Spinney, balked at the sheer amount of money that the board of selectmen recommend the town appropriate, arguing that $25,000 to make up for budget overruns is unprecedented.

Stockford said that the town is appropriating so much money as a means to establish a cushion for future budgets. Any of the $25,000 that is not expended on overages will roll over into the next year’s budget.

Lincoln County Administrator Carrie Kipfer said that she was in favor of the article as it promotes municipal cash flow.

“I think that this is good, sound municipal governance,” Kipfer said.

Article 1 on the Dec. 14 Special Referendum Town Meeting warrant will ask the town to elect a moderator to serve as the election warden.

Article 2 will ask the town to elect a candidate to fill the first selectman seat for the remainder of the term, which will expire at the next regular town meeting in March 2022.

The vote will take place on Dec. 14 at the Alna Fire Station; absentee ballots are available.

Residents may call the town office and request a ballot be sent to them or they may vote in person at the office during regular office hours in the presence of the clerk.