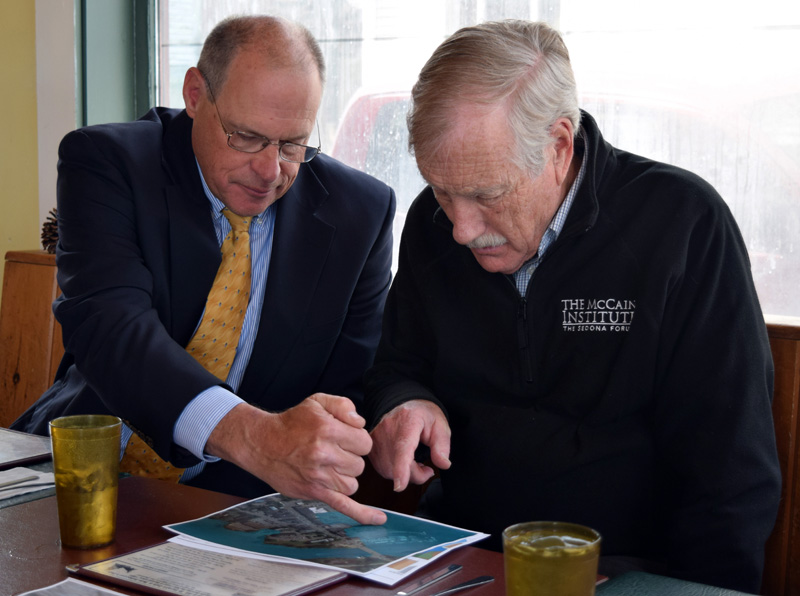 U.S. Sen. Angus King, I-Maine, toured Buzz Maine and the CLC YMCA in Damariscotta and discussed flood protection with local officials during a visit to the county Friday, April 27.

King also walked around downtown Damariscotta and Newcastle and stopped into several businesses, where he chatted with customers, employees, and shop owners.

The first stop of the day was lunch at Sarah’s Cafe in Wiscasset with nine local officials – representatives of the county and the towns of Boothbay Harbor, Damariscotta, and Wiscasset.

Boothbay Harbor and Damariscotta officials told King about recent flooding in their towns, while Wiscasset officials expressed concern about the vulnerability of the town’s wastewater-treatment plant.

King said the situation calls for the creation of a fund to protect coastal infrastructure from flooding.

“Of course, the hard part is how to pay for it,” he said. “We’re already spending our children’s money.”

Because infrastructure improvements have a long lifespan, they can justify borrowing. But the federal government has spent itself deep into debt for day-to-day expenses like salaries.

King agreed to discuss the matter with his coastal colleagues, including Republican senators from Louisiana, another state vulnerable to flooding. “Anything we do has to be bipartisan,” he said.

Local officials showed King photos and studies on the issue, and King asked for more.

“I feel a floor speech in the Senate coming on, but I need some more pictures,” King said.

Despite the serious topic of conversation, King joked with local officials at lunch and others he encountered throughout the day. 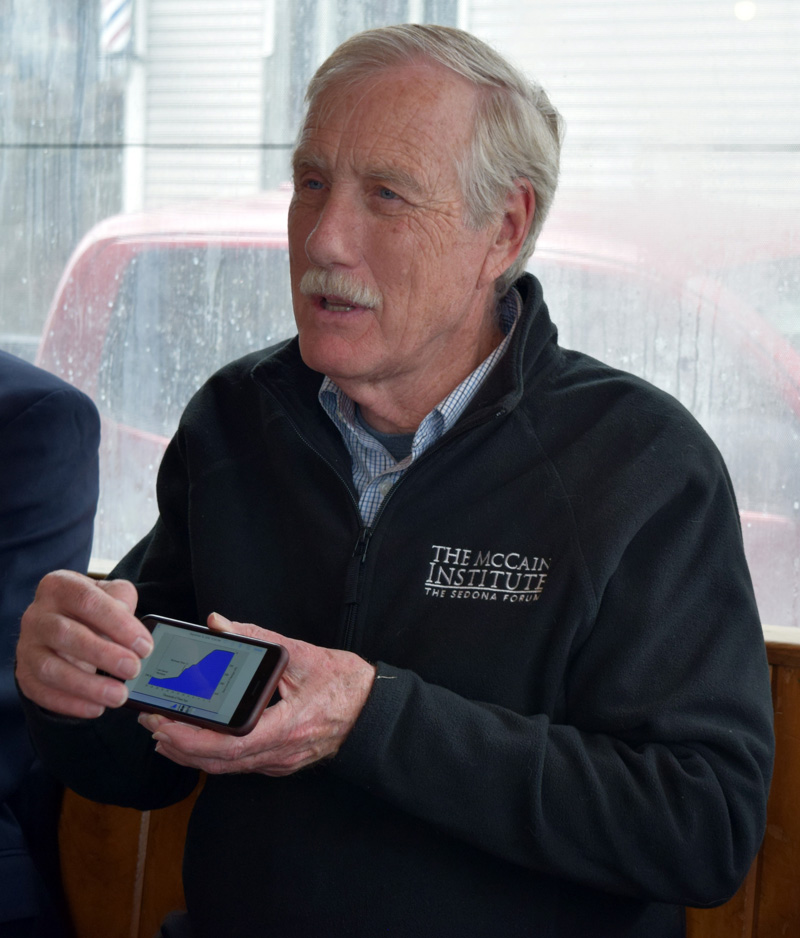 U.S. Sen. Angus King shows local officials a graph on his smartphone during a meeting about coastal resiliency at Sarah’s Cafe in Wiscasset on Friday, April 27. (J.W. Oliver photo)

In response to a comment about the potential for confusion as Maine uses ranked-choice voting for the first time in June, King suggested that the state could rely on international aid.

“The Russians will help,” he said. “They’ll figure it out.”

Boothbay Harbor Board of Selectmen Chair Wendy Wolf suggested that the government end subsidies to oil companies and use the money for infrastructure protection.

“You deliver that message to the Koch brothers,” King said, in reference to the billionaire conservative donors.

King, who caucuses with Democrats in the Senate, touted his close relationship with his senior colleague, U.S. Sen. Susan Collins, R-Maine.

The independent and the moderate Republican often issue joint statements and write joint letters to government agencies, a relationship King described as unusual in a highly partisan Congress.

“I just got a text from Susan,” he said. “She says I text her more than anyone except her niece.”

After lunch, the next stop was the Twin Villages. King arrived at the Damariscotta Region Chamber of Commerce in Newcastle to meet his tour guide, Executive Director Stephanie Gallagher.

The group walked across the bridge to Damariscotta and the coworking space Buzz Maine.

King heard about Buzz Maine’s business model from owner Jennifer VanHorne and talked with the entrepreneurs and telecommuters for whom Buzz Maine serves as an office.

King then walked around town, going into Sherman’s Maine Coast Book Shop, the Frances Perkins Center, and S. Fernald’s Country Store in Damariscotta, as well as Milling Around in Newcastle.

His last stop was the Central Lincoln County YMCA, where CEO Meagan Hamblett led a tour of the newly expanded and renovated facility.

During a brief discussion with reporters after the tour, King talked about the importance of remote workers to the state’s economic future and the need to improve the state’s high-speed internet infrastructure, and praised the new-and-improved YMCA.

“This Y is amazing,” King said. “I mean, the space, the utilization of the space, the way the community came together … it’s a real expression of Maine, of what Maine is, and community.”

“I don’t want to overstate it, but this could be transformative for this community – a place for kids to go, a place for seniors,” he said.

King often hears about isolation among seniors in rural Maine. “I think isolation is a big issue in Maine, and this will combat that,” he said.

“The other highlight of the day, for me, was the Buzz place,” King said.

“A guy working for Sysco, a guy who worked for Oracle, a woman who was with the virtual environmental group, a woman who works for MIT – I mean, that’s amazing!” he said. “Ten years ago, in Damariscotta, Maine, it wouldn’t have happened.”

King called telecommuting “a really important part of the future of Maine.”

“I think it’s a huge opportunity and that little space today was a really perfect example of what I think is a great opportunity for Maine.”

To take advantage of the opportunity, though, Maine needs better broadband infrastructure.

Big corporations like Anthem, L.L. Bean, and Unum “have remote workers all over Maine … but the barrier is broadband,” King said. “You’ve got to have broadband.”

King was impressed with the internet speeds at Buzz Maine and the YMCA, both of which have fiber-optic internet service from Tidewater Telecom Inc., of Nobleboro.

At Buzz Maine, King asked for the Wi-Fi password and used an app on his smartphone to measure the speed.

Many rural towns lack this infrastructure, “and that’s a big goal that I’m working on, is increasing connectivity,” King said.

King didn’t have much to say in response to a question about his Republican challenger in the November election, state Sen. Eric Brakey, of Auburn.

“I know he’s pretty conservative, but that’s about it,” King said. “We’ll have plenty of time to sort that out. Right now, I’ve got all I can do to keep track of what I’m doing in Washington.”