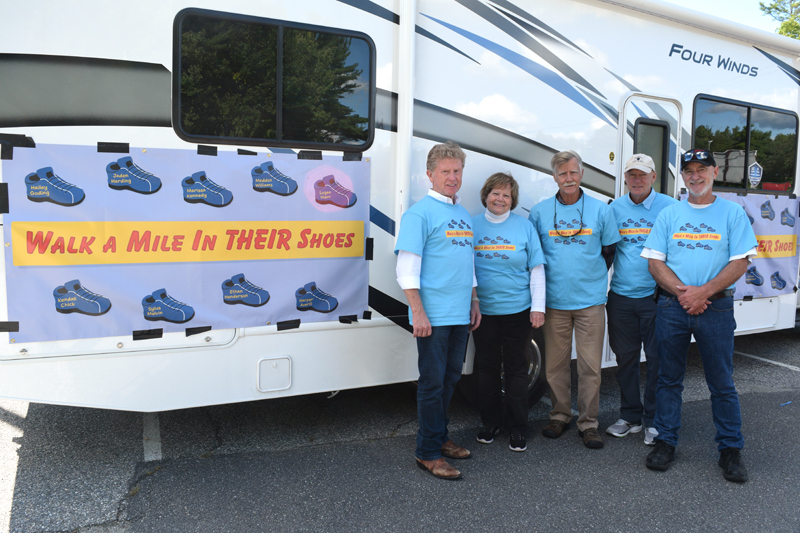 Senator Bill Diamond, D-Cumberland, accompanied by legislative colleagues and volunteers, completed the “Walk a Mile in Their Shoes” campaign to raise awareness of fatal child abuse cases in Maine on Sept. 29, at the Wiscasset Community Center.

On Sept. 17, Diamond announced a two-day walking tour through communities in central and Midcoast Maine touched by cases of fatal child abuse. Windham’s Camping World donated an RV for travel from location to location.

The senator was accompanied by his wife Jane, volunteers Ron Eby and Dennis Ela, and various local representatives, as they shared their legislative goals and listened to community members’ concerns and ideas.

Representative Jeff Hanley, R-Pittston, accompanied Diamond and company during their Chelsea and Wiscasset stops on the second day of the tour.

“It’s a headline one day, and the next day there’s a new headline… we need to stop that cycle. These children get murdered, and then after three days everybody forgets,” Hanley said.

Since May, the state has seen four cases of children allegedly killed by their parents, contributing to a long history of fatal child abuse incidents in Maine.

The senator’s stop in Wiscasset was motivated by the widely publicized death of 4-year-old Kendall Chick. In 2016, Chick was placed in the care of her grandfather and his girlfriend, Shawna Gatto. Chick died in December 2017 as result of severe physical trauma, with investigators finding evidence of chronic physical abuse.

Gatto was sentenced to 50 years in prison for depraved indifference murder in 2019. Diamond was in attendance at the trial.

The first day of the walk began in Old Town and proceeded to Stockton Springs, where Diamond and local representatives heard from various community members, including the grandmother of Maddox Williams, who was his caregiver before his mother regained custody.

Attendance was sparse at the tour’s stop in Wiscasset on Wednesday, likely due to a schedule change from 4 p.m. to 2 p.m. at the last minute.

Diamond said that he and the legislative colleagues that accompanied him spent the two days listening to the concerns of community members regarding the Maine Department of Health and Human Services’ handling of child abuse. They hope the tour and the publicity that it generates keeps the issue at the forefront of public consciousness into the next legislative session.

Both Hanley and Diamond believe that the child abuse cases are at least partially a result of systemic failures within the structure of DHHS.

“DHHS is half the state. Half the state budget goes to that one department. It is monstrous. It’s too big to control,” Hanley said.

Diamond has sought legislative means to reduce and eliminate child abuse in Maine since Logan Marr’s death in 2001. In April, the senator introduced a bill to separate the Office of Child and Family Services, which handles child abuse cases, from DHHS and make it its own agency, establishing a commissioner for the office at the cabinet level, as well as a separate budget.

Both Gov. Janet Mills and OCFS Director Todd Landry came out against the bill, which passed through the Maine Senate but failed in the House of Representatives.

Diamond said he will renew the effort to separate the state’s child welfare programs from DHHS in the next legislative session. The senator also argued that there is a need for additional training for judges that handle child abuse cases.

“We’re not saying ‘this governor is bad,’ or ‘this commissioner is bad,’ we’re just saying that the whole system has continually been broken,” Diamond said.

According to the Bangor Daily News, DHHS spokesperson Jackie Farwell said that Diamond’s proposal would waste improvement efforts that are already underway at the agency, including a collaboration with Casey Family Programs, which is responsible for investigating the recent fatal child abuse cases in relation to the office’s policies and procedures.

Both Bill and Jane Diamond are former educators, with the former serving as a school administrator for a number of years; Jane suggested that their experiences of powerlessness over some children’s lives in those roles contributed to their passion for this issue today.

“We both saw a lot happening, and it was very frustrating not knowing what we could do about it,” she said.

Dennis Ela, a volunteer and former educator who was once the principal at Massabesic Middle School, said that part of the reason he decided to accompany Diamond for the two-day campaign was his own past experiences as an education administrator.

“I dealt with a lot of kids who came from really tough circumstances. I made many home visits over the years, and kind of saw it first hand,” he said.