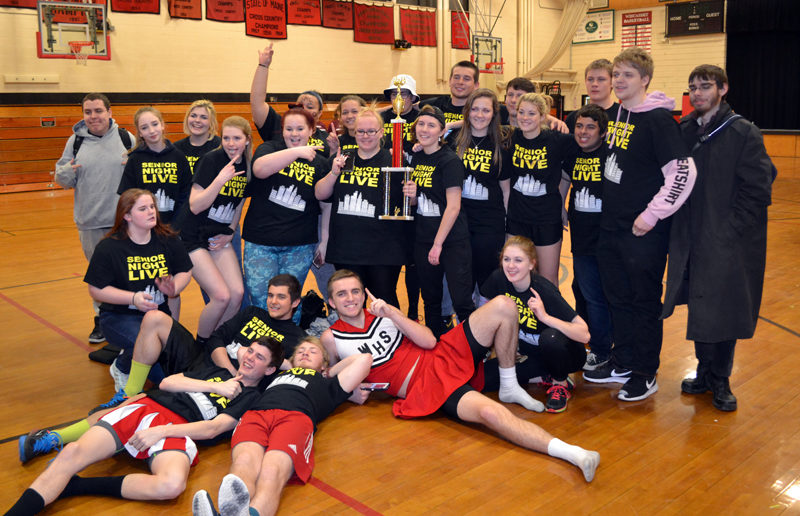 There was fierce competition during the final events of Wiscasset high school’s winter carnival Friday, March 3, but the class of 2017, with the team name “Senior Night Live,” took the victory lap through school halls with the trophy.

The entire student body of Wiscasset Middle High School gathered for the final assembly to compete in the tunnel run, donut-on-a-string, and pie-eating competitions.

The rivalry, however, belonged to the high school classes, with the male cheerleading competition a pivotal event in determining the winner. The juniors made it known, with a slogan on their team T-shirts, “love us or leave us, you’re never gonna beat us,” that they were in it to win it.

With playful taunting, jeers, and homemade signs, students from each grade made it known that they were ready to fight for each point at the final assembly.

The “Senior Night Live” and “Fresh and Furious” teams tied for first place in the male cheerleading competition. The seniors owned the acronym “SNL” with their cheerleading routine, which could have been developed by the writers and performers of “Saturday Night Live.” 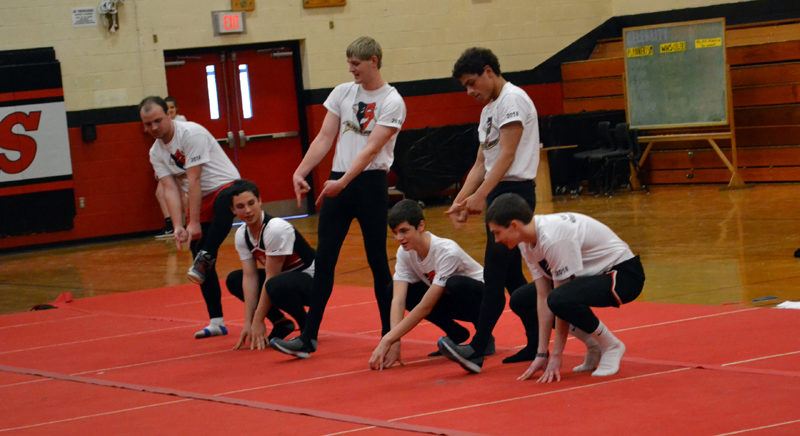 After a couple of cheers, the chess players screamed at the cheerleaders for the distraction, and demanded to know where they came from, because they were not from the school. The chessboard was thrown to the ground and all four broke into a modern dance routine, which made the audience go wild.

The “Fresh and Furious” class of 2020 wowed the audience with their acrobatics, as Cedric Loyola somersaulted over his teammates several times – sometimes while teammate Gage Varian did a headstand.

The “Juxtaposing Juniors” presented stiff competition with their performance, which was a choreographed dance routine to an eclectic mix of music that included Billboard Top 40 pop songs and heavy metal. Several props and costume changes were involved in the performance, which ended with the class of 2018 pelting the audience with candy. 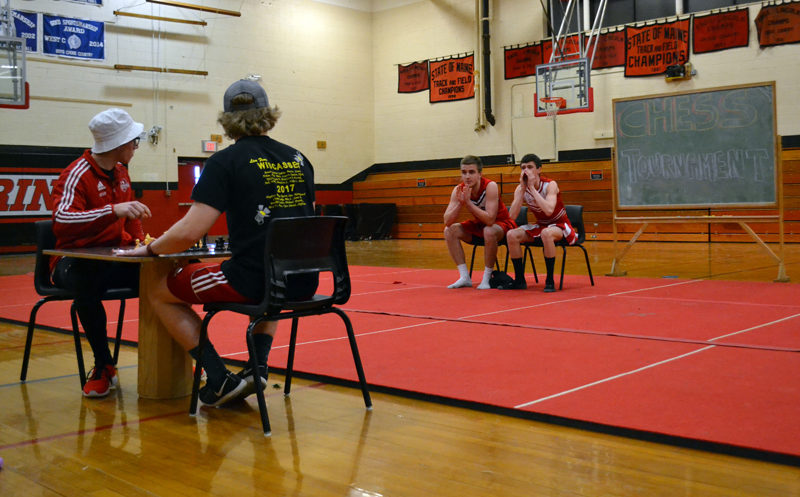 From left: Wiscasset seniors Grant Hefler and Aidan Carlson stare in bewilderment as Ethan James and Brandon Goud cheer them on during their chess game. The seniors tied for first in the winter carnival male cheerleading competition Friday, March 3. (Abigail Adams photo)

Only two male students from the “Sophorific Sophomore” team braved the mats for the cheerleading competition, but that did not stop them from completing a lift with the help of some female cheerleaders. The class of 2019 came in fourth place at the carnival, but made it clear, with their T-shirt depicting a sheep and the slogan “five more minutes,” that they just needed more sleep.

The music from “Jeopardy!” played as math teacher Timothy Flanagan calculated the complex algorithm to determine the winner of the winter carnival, which began in February, but was interrupted by a series of snow days.

The winter carnival is a long-standing tradition of the Wiscasset high school, student council adviser Deb Pooler said. The events and activities are organized and sponsored by the student council, which fundraises for the event and purchases all of the materials.