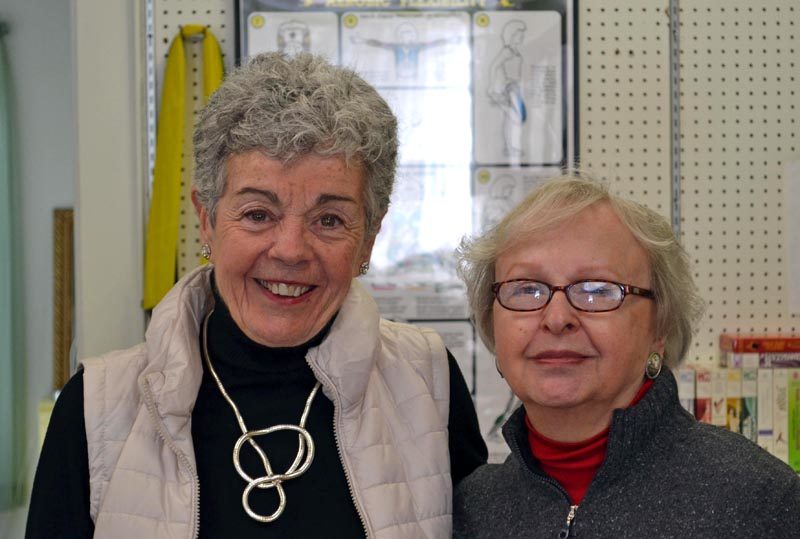 The abrupt closure of Curves in Newcastle a decade ago prompted a committed group of women to launch their own fitness center. On Wednesday, Feb. 15, Shapers Fitness Gym in Damariscotta marks its 10th anniversary, a feat achieved through the community spirit of the membership, said managing partner Lil Garcia.

“The members work to make this place work,” partner Jeanne Davis said. Together with Barbara Fraser, Davis and Garcia own and operate Shapers Fitness Gym, which was created out of the brainstorming sessions of seven women who were previously members of Curves.

A bond formed between the women, who had become accustomed to working out together, Davis said.

They put their heads together to develop a plan for their own place, Garcia said. “We made it better,” she said.

Shapers Fitness Gym opened three months after the group first met, a sign that there was both the need and the support to make the fitness center a reality, Davis said.

The bond that brought the center’s seven founding members together is now shared by all of the about 80 year-round and seasonal members of the gym, Garcia said.

“There’s a social aspect to this,” Garcia said.

That aspect makes Shapers Fitness Gym stand out as a fitness center and ensures its success and continued operation, Davis said. “That and the personal touch of Lil,” Davis said.

Shapers Fitness Gym initially opened its doors in the space under the Damariscotta River Grill in 2007. The center expanded its membership to include both men and women – Curves was open to women only. Shapers offers free membership to active-duty service members and discounts to their families.

The ages of members now range from 10 to 91, Garcia said.

About two years ago, the fitness center moved to its current location at 90 School St., a move that was again made possible by the dedication and support of members, Garcia said. Members helped move the equipment and clean and paint the space.

Through the use of a keypad system, the fitness center is open 24/7. In addition to equipment for circuit training, Shapers has treadmills, spinning bikes, and elliptical machines. There is an area for those who like to exercise with a DVD workout, and a personal trainer offers classes twice a week.

A Healthy Aging class focuses on balance and mobility, crucial to helping the aging population stay fit and on their feet, Garcia said. An early evening class is offered for those who are on a 9-to-5 work schedule, and the gym is available for use day or night, so anyone, regardless of schedule, will have the ability to work out, Garcia said.

The community spirit that exists among the membership also extends to the broader community, Garcia said. Every month, Shapers delivers donations from its members to the Ecumenical Food Pantry at The Second Congregational Church in Newcastle and to the Lincoln County Animal Shelter, Garcia said.

The fitness center also doubles as an art gallery, with a new exhibit of artwork from members displayed every couple of months.

“We really do support each other,” Garcia said.

While Garcia, Davis, and Fraser are technically the owners, “this really is member-driven,” Davis said.

When Garcia broke her ankle and was “down for the count” for two months, members joined together to keep the place running, Garcia said.

The community spirit is so strong at the center, sometimes members forget to work out because they are so involved in their conversations, Garcia said.

According to Davis, Garcia helps nurture this spirit with little things, such as sending a birthday card to all current and former members.

The founding members of Shapers Fitness Gym “really didn’t know” if the endeavor would be successful, Garcia said.

Ten years later, the fitness center is going strong. “The members are making sure we stay here and stay viable,” Davis said.

Shapers Fitness Gym will celebrate its 10th anniversary with an open house from noon to 3 p.m., Saturday, Feb. 18. The fitness center is offering a discount on its membership fee for new members who join in February.