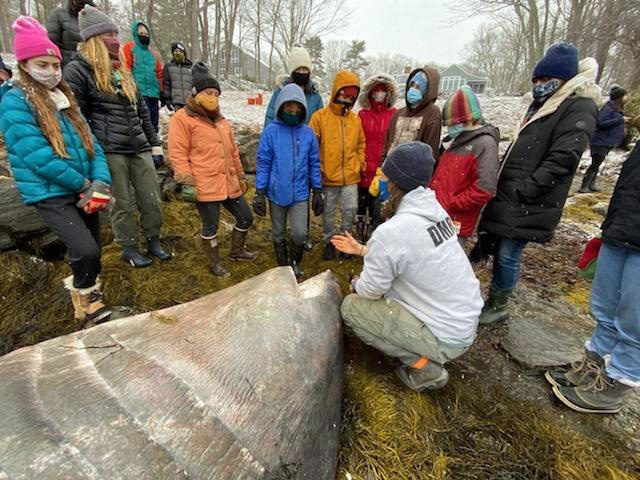 Bremen students learn about a basking shark from a scientist with the Maine Department of Marine Resources. (Photo courtesy Liz Mcgregor)

Bremen students received a memorable lesson in marine science when a 26-foot male basking shark washed up on the shore of Greenland Cove early last week.

“Something that special will probably never happen in our community again,” said Allison Lee, a parent and resident. “Our children will remember this day for the rest of their lives.”

“John was taking our dog out for a walk. It was nearing sunset and the tide was still high when he spotted the shark floating in the cove,” said Crissy Stirratt, John’s wife. “He ran home to grab me and our daughter.”

“Initially, John thought it was a great white,” Crissy Stirratt said. “It was shocking, at first, to see this massive shark floating in the cove we swim in.”

A neighbor helped the Stirratts identify the shark as a basking shark, because of its tiny, rounded teeth.

Large yet harmless, the basking shark feeds not on humans but on tiny, planktonic prey. It feeds by swimming close to the surface in the sunlight, with its mouth wide open.

“We went down to the cove and sat with the shark for a long time,” Crissy Stirratt said. 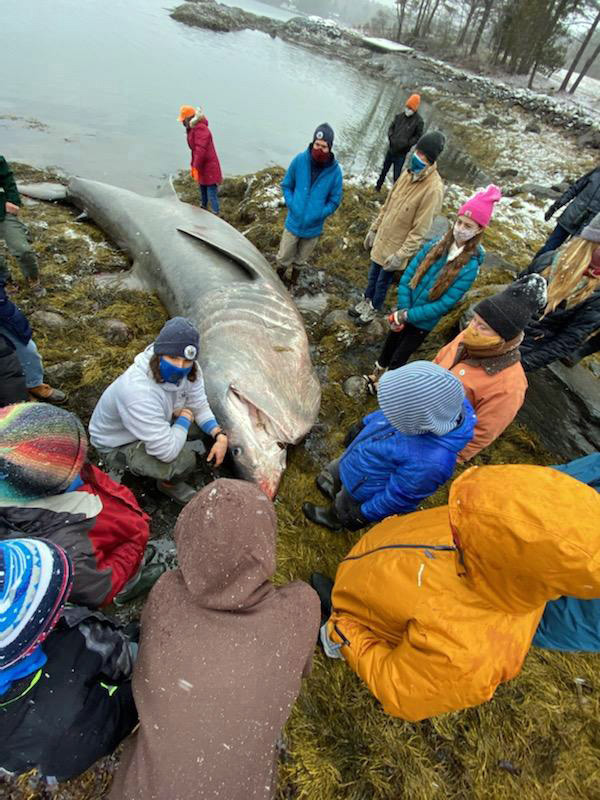 Later that evening, the Stirratts contacted James Sulikowski, a professor and associate director of the New School of Mathematical & Natural Sciences, who has studied sharks in Maine and beyond for more than two decades.

Early Tuesday, Crissy Stirratt shared the find with parents in the “Bremen pod,” a group of 12 Bremen students in grades six through eight who learn together at the Bremen Library with facilitator Sarah Thorpe. The 12 students are enrolled in Great Salt Bay Community School, but have chosen to use the school district’s off-site learning option with support from Thorpe.

As the facilitator of the pod, Thorpe assists the students with their schoolwork and any difficulties that come up.

Thorpe has an extensive background in marine science. She studied marine ecology at the College of the Atlantic, graduating in 2013; she operates a sailing vessel out of Camden during the tourist season; she has sailed many vessels up and down the East Coast and around the Caribbean; and she farms sugar kelp in Muscongus Bay.

Thorpe said that in all her years of sailing, she has seen many rare animals, but never a basking shark.

“Even if my kids were going to school in person, I would have pulled them out for the day and taken them to see the shark,” Lee said. “That kind of experience happens once in a lifetime.”

Before Davis and Jenner arrived, Thorpe and the students, with several parents and siblings, saw the shark on their own.

“I was so excited to see the students demystify the shark — it’s really easy to be afraid of sharks, especially now that great white sharks are venturing to Maine,” Thorpe said. “I was so happy to see the kids interested and not afraid of it.”

For two hours, Davis and Jenner engaged the kids with an interactive lesson about the shark, explaining its life history, physical characteristics, and what zone of ocean it occupies, all the while cutting the shark up to collect samples for research analysis.

“The kids listened beautifully the whole time, despite the snow coming down on them and the tide coming in,” Thorpe said.

“Matt was literally standing on the shark, inviting the students to touch it and prompting them to ask questions about it,” Lee said.

“Matt took the time to answer everyone’s questions, even as the tide was starting to come in,” Crissy Stirratt said.

The shark encounter offered the group of local students an up-close lesson in marine science, one that can’t be found on a screen or in a textbook.

“It was such a great opportunity for the kids to see science happening in the lab,” Thorpe said. “When you study marine biology, the ocean is your lab.”

“You just can’t plan or expect for that kind of situation to happen,” Crissy Stirratt said. “It was really a serendipitous encounter.” 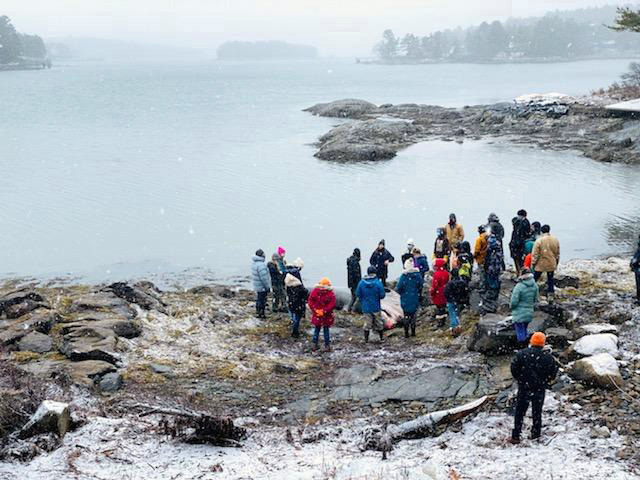 “All I saw yesterday was happy, healthy, and thriving kids,” Lee said.

The next morning, Davis and Jenner returned to collect samples of the shark, including muscle and vertebrae samples, as well as fin clips and its gill arch and reproductive organ.

The samples are being distributed to collaborators to conduct aging, dietary, and genetic analyses.

“As sad as it is to see the shark deceased, it’s a rare and exciting opportunity for scientists to collect samples and conduct research on the animal,” Davis said. “The samples can be used to further conservation of the shark.”

“There’s very little known about the basking shark’s migration pattern,” Davis said. “They’re definitely one of the most mysterious sharks.”

The basking shark is the second-largest fish in the world and the largest shark that lives in the waters off New England.

They can be found throughout the world, including in the Gulf of Maine, where they come every year to feed on crustaceans and copepods.

Thorpe said the students in the Bremen pod continue to talk about their special snowy morning on Greenland Cove.

“It kind of feels like he’s an extension of our pod, almost like a character in our little world,” Thorpe said.