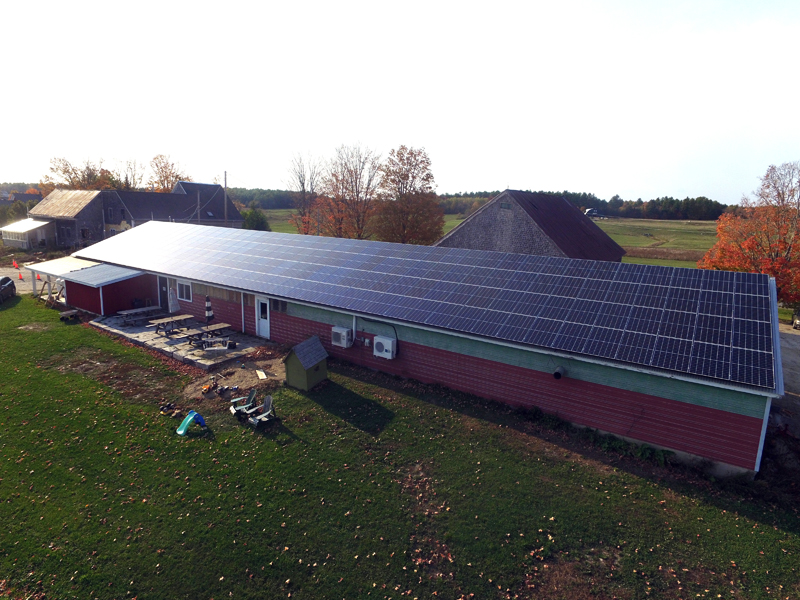 A 55-kilowatt solar array on the roof of Sheepscot General Store and Farm in Whitefield. (Photo courtesy Richard Simon)

Sheepscot General Store and Farm in Whitefield installed a 55-kilowatt solar array this summer, the first array to take advantage of a new program for Maine businesses and institutions.

The array, which consists of 168 325-watt solar panels, has been in the works for about four years, according to Richard Simon, founder of Washington-based Maine Energy Performance Solutions.

Simon, along with Sheepscot General owners Ben and Taryn Marcus, had been waiting for solar technology to improve over the years before the installation. Taryn Marcus said the technology has been plateauing recently.

The Maine Legislature adopted new solar rules in November 2019 as part of L.D. 1711, “An Act To Promote Solar Energy Projects and Distributed Generation Resources in Maine.”

Net energy billing is a way to encourage the use of small-scale renewable generation facilities, like solar arrays, by billing customers on the basis of net energy, according to the Maine Public Utilities Commission.

The anticipated annual production for Sheepscot General’s facility is 71,000 kilowatt-hours. “We expect to need about 25% more than that, but we hope to reduce our energy usage over the next year and use the array to cover our total usage,” Marcus said.

Net energy billing isn’t new to Maine, but the law passed in 2019 set a new tariff rate program for commercial and institutional customers. The Maine PUC will set the tariff rate each year. The current rate at which the customer is credited for medium-size facilities, like the solar array at Sheepscot General, is about 12.7 cents per kilowatt-hour.

Sheepscot General’s solar array is the first to utilize this new rule, according to CMP spokesperson Catharine Hartnett.

The project’s total cost was around $107,000, but a grant from the U.S. Department of Agriculture’s Rural Energy for America program covered 25%.

Ben and Taryn Marcus studied sustainable agriculture on the West Coast before returning to his home state.