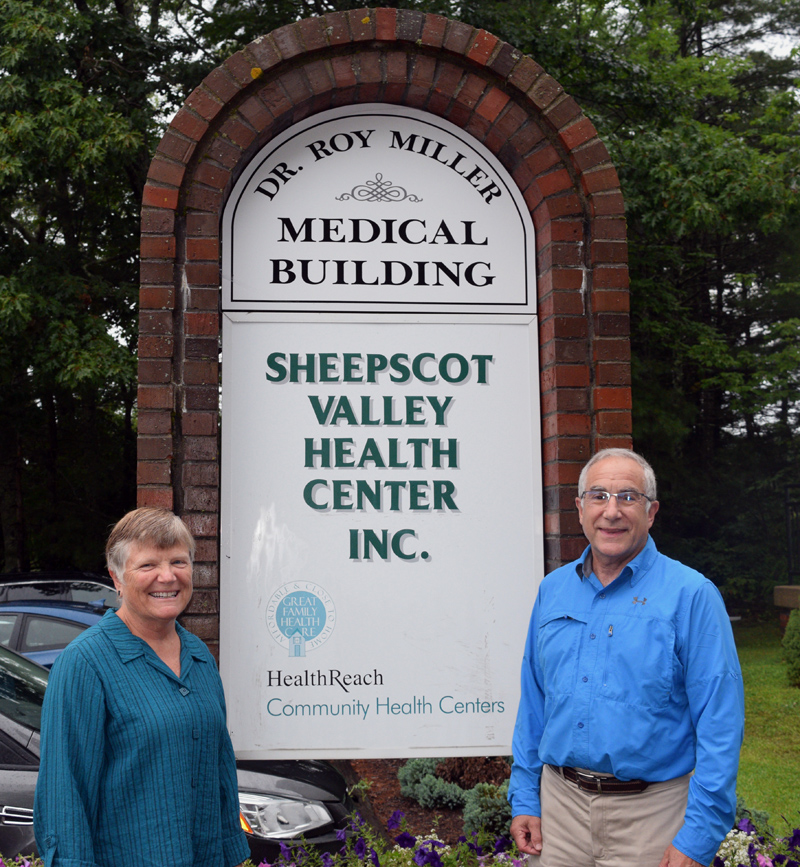 Lisa and Dr. Roy Miller stand next to the new sign for the Dr. Roy Miller Medical Building in Coopers Mills. The Sheepscot Valley Health Center Board of Directors renamed the building in honor of the center’s first physician and his 38 years of service. (Jessica Clifford photo)

The Sheepscot Valley Health Center has renamed its building in Coopers Mills in honor of its first physician, Dr. Roy Miller.

After serving the primary care facility for his entire 38-year career, Miller, 68, of Somerville, retired from full-time practice at the beginning of January.

The Sheepscot Valley Health Center Board of Directors told Miller of its plan to name the building after him earlier this year and unveiled a new sign at its annual meeting Wednesday, Aug. 21.

The new sign reads “Dr. Roy Miller Medical Building” above a sign with the name of the health center and its parent organization.

The Whitefield facility is one of 11 health centers in the HealthReach Community Health Centers network. The board owns the building and HealthReach provides the health care.

“They are losing a lot of the doctors who were the original pioneers back when the federal government started funding these rural health centers, and Roy was one of those,” John Opperman, president of the Sheepscot Valley Health Center Board of Directors, said of HealthReach.

The health center is in a renovated Baptist church. When Miller arrived, he did not have a traditional medical facility to work in.

“He provided care in a trailer in a parking lot as the building was being renovated. He really was the first resident of this building,” Connie Coggins, president and CEO of HealthReach Community Health Centers, said at Wednesday’s annual meeting.

“It’s hard to draw doctors to rural health settings, so it’s a loss to us, but certainly after 38 years he deserves a good retirement,” Opperman said.

Miller went to medical school at the University of California San Diego and completed his residency at Maine Medical Center in Portland.

“In both places, it seemed like whatever effect you had, you wouldn’t be able to tell, because there are so many other doctors and people. I wanted to be somewhere where I could feel like I made a difference and could see it over the years,” Miller said of why he chose to work at Sheepscot Valley Health Center.

Miller saw many changes to the facility over his nearly four decades there.

From the trailer in the parking lot, the center moved into the front of the old church. In 1990, an addition was built. In the 2000s, the building was renovated.

“It gets more and more enjoyable as the years go by, as you take care of two or three generations of the same family,” Miller said. “Sometimes I’d see a name on the chart and say, ‘Boy, I haven’t seen that teenager in a while,’ and this 40-year-old would walk in.”

The parts of the job he misses most include getting to know his patients, the “honor” of helping people, and the feeling when people trusted him with information they had not told anyone else. 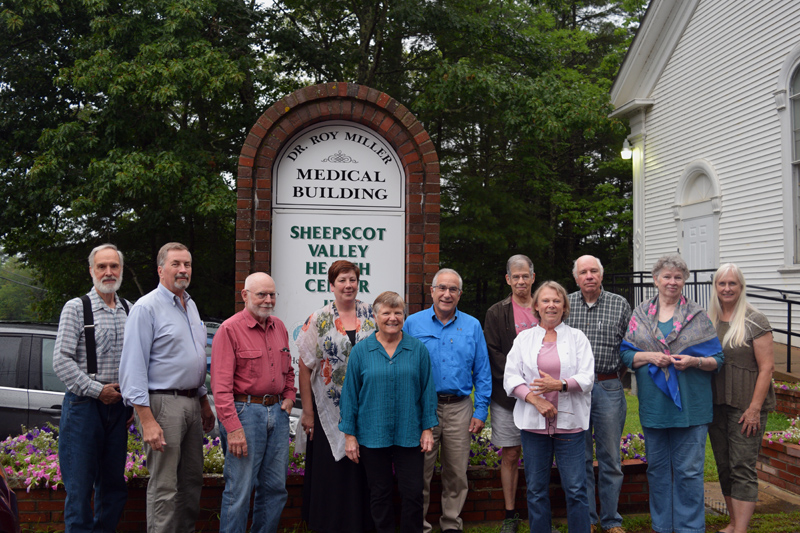 The Sheepscot Valley Health Center Board of Directors poses with Lisa and Dr. Roy Miller in front of the new sign for the Dr. Roy Miller Medical Building. (Jessica Clifford photo)

According to Miller, one of the positive changes in health care in the area is a decline in the number of young people dying of heart attacks and heart disease. He likes to believe this has to do with the center’s care.

Some of the biggest challenges were trying to get people to quit smoking, stop other tobacco use, and improve their health through physical activity, Miller said.

It was also a challenge to sort through advice from experts and decide how or whether to act on it.

Experts previously told doctors they were not treating pain adequately and needed to use more narcotic painkillers, Miller said. “I was one of the doctors that got sucked in. I had almost never prescribed narcotics,” he said.

For the last 10 years, he worked with many patients going through medication-assisted treatment for addiction with Suboxone.

He called the work “tremendously satisfying,” because patients “got their lives put back together” through the medication and work with counselors and nurses.

“That was a very nice way to end my career,” he said of helping to treat opioid addiction.

Miller will continue to work two or three days a month, traveling to HealthReach centers in central and western Maine to fill in where needed, Coggins said.

He and his wife, former state Rep. Lisa Miller, sit on the boards of local organizations. Roy Miller is active with Augusta’s Boys and Girls Club, and is on the board.

The dedication was a nice sentiment, Miller said, but he could never have done everything on his own.

“One of the things I learned back when I was a medical student (was) not one person makes a place special – it takes everybody,” he said.

“It’s nice that they named the building after me, but there’s not one of us that makes that big of a difference by themselves,” he said.