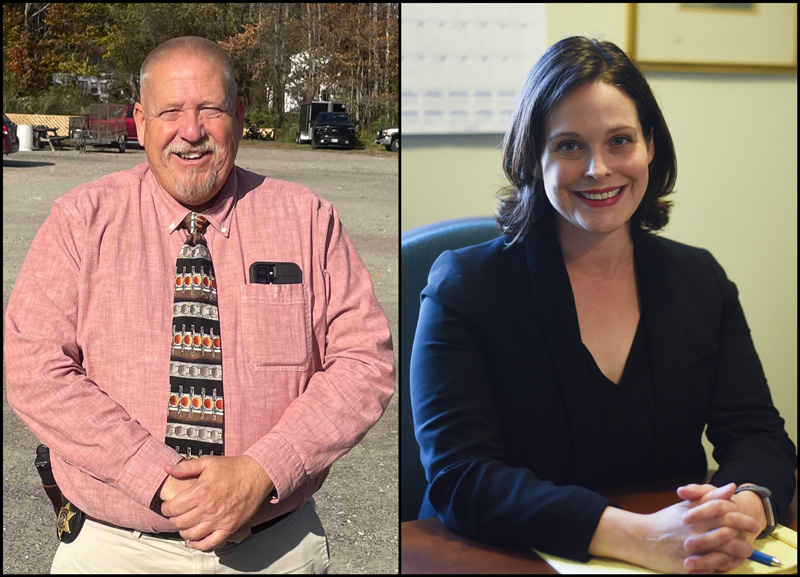 In addition to electing candidates for U.S. Congress, the Maine House of Representatives, and the Maine Senate, Lincoln County voters will also cast their ballots for sheriff and district attorney.

After nearly 20 years in office and unopposed in his bid for a sixth consecutive four-year term, Brackett said he still finds the job exciting, rewarding, and challenging

In this next term, Brackett said his priority is guiding the department into the future against a backdrop of a changing American culture, an extremely partisan political climate, and increased public scrutiny on law enforcement. Bracket said he personally welcomes the public’s attention.

“Fundamentally, as a law enforcement leader, some of the challenges that we’re facing is public perception,” he said. “Call it justice reform. Call it whatever you want. People have to trust in what we do, because if we lose the public’s trust, we lose a lot of our effectiveness.”

In an effort to build upon and maintain the public trust, Brackett said he hopes to put together a citizen’s advisory committee for the sheriff’s office, one as economically, culturally, and demographically diverse as possible in Lincoln County.

“What I am trying to accomplish with this advisory committee is find a group of people who are not selected by me,” Brackett said. “It’s not the sheriff’s good old boy committee.”

“Really what I am looking for is to increase communications from the sheriff’s office to the people we serve, through the people we serve,” he said. “It is easy to put out press releases or update my social media and web page and do those kind of things … but how are we really doing, and what are we really getting for feedback, and what are the expectations, and are we being transparent enough?

As an administrator, Brackett said one of the biggest challenges he has dealt with over the three years or so is a familiar one for many Maine employers: finding and retaining quality employees. Brackett credited the county commissioners for their support, raising wages to a competitive level over time and authorizing hiring incentives. Personnel costs account for about three-quarters of the LCSO’s roughly $4 million budget, he said.

On the positive side, barring unforeseen circumstances, Brackett said he does not expect to add positions to the LCSO in the immediate future.

“Money has been part of our challenge and the commissioners and budget committee have been supportive and I think that is having a positive impact,” he said. “It is not an easy investment, it’s a costly investment, but I think it is a wise investment.”

The county’s lack of available, affordable housing is an issue for the sheriff’s office as much as it is for the general public, Brackett said. As an administrator who long prioritized community policing, Brackett said deputies living in the communities they police is an ideal situation, one that promotes a level of comfort between the community and the officer.

“Community policing is a buzzword, but having our deputies close to home, having them being able to stop in at the softball game, the basketball game, or go to their kid’s event at the school, even while they working, I think it’s important part of what we do,” Brackett said. “It shows the human side of law enforcement. It is part of community policing. It’s a philosophy that I hold very strongly and promote so having somebody who lives here in the community would be ideal.”

When voted into office four years ago, Irving became the first woman and the first Democrat elected to serve as district attorney in Prosecutorial District 6, which consists of Knox, Lincoln, Sagadahoc, and Waldo counties.

The Waldoboro native is seeking a second four-year term to serve her hometown and its surrounding communities with a continued focus on restorative justice practices and victim-centered resolutions.

After a year in AmeriCorps working with Mainely Girls, an advocacy group working that empowers girls to thrive through activities including the arts, outdoor adventures, and mentorships, Irving attended the University of Maine School of Law, which she graduated from in 2009. In addition to her work in private practice, Irving’s professional history includes time as a labor organizer, community organizer, a political organizer with the Democratic Party, and as a clerk in the Legislature.

When former District Attorney Geoffrey Rushlau was appointed as a judge in 2017, Irving said she “saw an opportunity to change the criminal justice system” and decided to run for the seat. She defeated District Attorney Jonathan Liberman, R-West Bath, in the November 2018 election to become the county’s top prosecutor.

Under Irving’s leadership, the district attorney’s office has taken what she described as a “trauma-informed, victim-centered” approach to prosecution.

“Virtually almost every person who commits a violent crime is a survivor of a violent crime, and we need to start thinking about community safety in a much more holistic manner,” Irving said. “The traditional criminal justice process is centered around the defendant. It is not centered around the victim, so I would love this office to continue moving toward centering around harm and safety instead of just bureaucratic processes without real reduction in recidivism.”

Since taking office, Irving has instilled a policy that all cases involving sex crimes must be reviewed by her. The policy came about due to a case very early in her tenure in which an alleged sexual assault had occurred. While the victim reported the incident to law enforcement immediately after the alleged event, had gone through the entire sexual assault process, and made consistent statements throughout, there was a concern that the jury would ultimately see it as one person’s word against another, Irving said.

“The idea was … what’s the jury going to think if a young woman goes out and is under the influence and says they were sexually assaulted,” Irving said. “No longer will cases be declined by sexist assumptions by the jury, because the victim isn’t the ‘right’ kind of victim because they have a record or history of drug use … we are treating sex crimes like every other type of crime, and we will move forward with them like we would move forward with any type of crime. I think that’s been a positive step for the office.”

The wishes of the victim are also one of the components the office balances when moving forward with a plea deal, along with community safety and evidentiary issues with the case, Irving said.

“We try to keep everyone apprised of what the offers are and what the counter-offers are,” Irving said. “We try to make sure we’re recognizing how traumatic a trial can be … I don’t want to paint a picture that we do everything perfectly and victims are retraumatized in the process. There’s a lot of difficulty for folks that have served that, but we try to give them the agency to move forward.”

Irving is proud of the entire team in the district attorney’s office, from the prosecutors and victim-witness advocates to prosecutorial assistants and legal secretaries.

“We’ve got 28 people on this team up and down this coast who are 110% dedicated to this job,” Irving said. “They’re in this because they care about victims and survivors, their community, its safety, and they care about what we do here.”