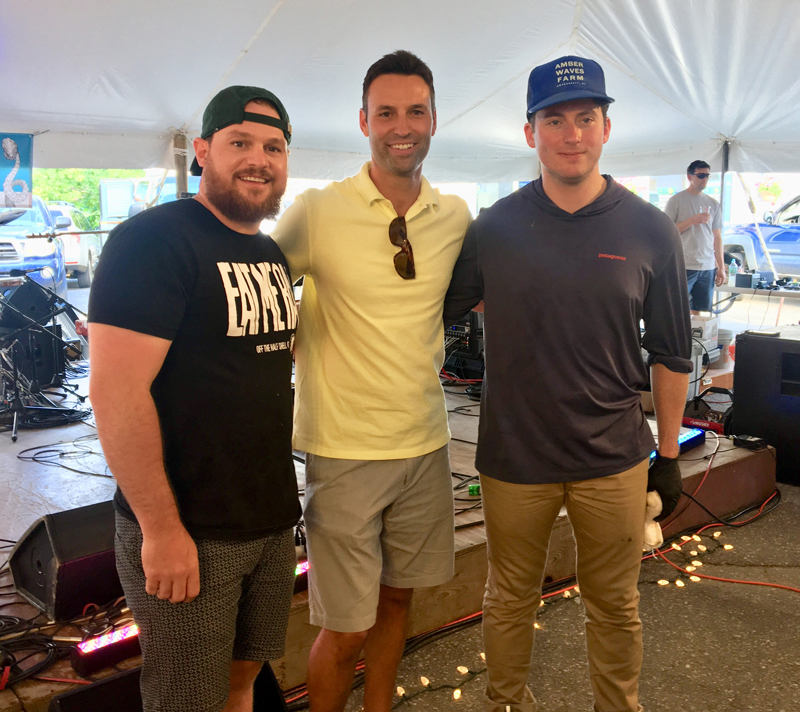 The heat was on in more ways than one in Damariscotta on Saturday, June 16, during the first annual Can-Am Shuck Star Competition and Oyster Party. The event was one of several over the course of the three-day Damariscotta Oyster Celebration, from June 14-16.

The shucking event featured 12 of the U.S. and Canada’s top shuckers, some of them already award winners, competing for the title.

At one point during the sweltering afternoon, the thermometer hit 95. Master of ceremonies Todd Gutner, chief meteorologist with News Center Maine, spoke about the figurative heat on the shuckers to not only be quick, but also to make their shucked oysters look appealing on their platter of crushed ice.

Each contestant was given 14 oysters, from which to pick and choose their favorite dozen. Three contestants at a time began shucking simultaneously as the timekeepers started their stopwatches. The large crowd of about 300 cheered them on, yelling, “Shuck! Shuck! Shuck! Shuck!”

The shuckers were judged by Bill Mook, of Mook Sea Farms in Walpole; Bill Gerencer, of Foley Fish in New Bedford, Mass.; and chef David Seagal, of the Cull & Pistol restaurant in New York City.

In the final tally, James Geoghegan, of the West Robins Oyster Co. in Southampton, N.Y., took the crown, and $700, with a time of 59.2 seconds. Clark placed second, in 61 seconds, and won $500. Brendan Parsons, of Shuck Station in Newcastle and BP’s Shuck Shack in Portland, took third. In fourth place was Ryan Kripp, a teacher and shucker from Peabody, Mass. Jeff Odess, of Black Trumpet Bistro in Portsmouth, N.H. took fifth.

The celebration also included a “Tour de Source” cruise to see Damariscotta River oyster farms and taste oysters on the water, and a “Taste Maine’s Future” showcase of local chefs at Round Top Farm in Damariscotta.

The celebration, spearheaded by Rory Strunk, chief executive officer of O’Maine Studios in Portland, was the first of its kind.

The shucking event, that included raw and wood-fired oyster tastings, wood-fired pizzas by Harvest Moon, beverage pairings, local seafood, and live music, was held under a large tent on Courtyard Street, behind the Best Thai restaurant.

Before Jake Gerry showed off his shucking skills, he wowed the crowd with another of his talents – rapping, about shucking. After the competition, the Jason Spooner Band performed.

Food Network Magazine’s vice president of digital culinary content, Michelle Buffardi, was present throughout the long weekend, and acted as a judge at the Oyster Chef Competition.

The Damariscotta Oyster Celebration was developed by O’Maine Studios as part of an initiative called Taste Maine’s Future. The initiative aims to expand sales demand and workforce development for Maine’s passionate food and beverage entrepreneurs.

The partnering sponsor of the celebration was the Boothbay Harbor Oceanside Golf Resort.