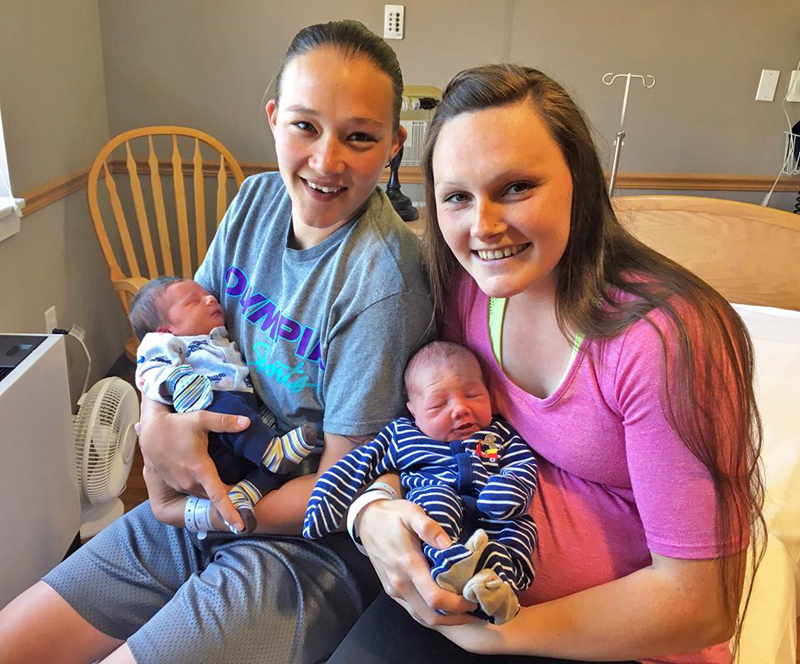 While Maynard and Kelley weren’t as close when they were growing up, the two have had a stronger bond as they have gotten older, Maynard said.

“We have a great bond, and can go a few days without talking, but we still always pick up right where we left off,” Kelley said.

Maynard found out she was pregnant on Christmas morning after taking a test at 3 a.m. She and her husband, Shale Maynard, had been trying for another baby for a while, and the positive pregnancy test was “a wish come true,” Maynard said.

A short time after finding out, Maynard called her sister to share the good news.

Kelley was about 10 weeks pregnant at the time of the conversation, having kept the news a secret with her husband, Todd Kelley, for a few weeks. The sisters immediately compared due dates – Kelley was due Aug. 21 and Maynard a week later on Aug. 28.

“I was so excited for her because I know she’s wanted another baby for a while and had been trying,” Kelley said. “I was so happy when she told me that she was finally pregnant and we were only a week apart!”

The news was met with joy from both of the girls’ families as well. Maynard’s daughter, Kaylin, was “beyond excited” to become a big sister, and began picking out clothes for the baby whenever the two went shopping, Maynard said.

Kelley’s parents and in-laws were shocked at the news, and the couple’s sons – Isaac, Noah, and Trevor – were all excited.

The experience of being pregnant at the same time brought the sisters even closer together, Maynard said. The two talked nearly every day to compare how they felt and what they were craving, among other things.

“We had a lot of the same symptoms during pregnancy,” Kelley said.

“It was just so crazy how everything lined up,” Maynard said. “We kept joking how crazy it would be if we gave birth on the same day, but I didn’t actually think it would happen!”

On Aug. 1, however, Maynard went into labor with her son three weeks before his due date.

“My daughter had been early by four days, so it wasn’t unexpected that he would be early, but at the same time, I didn’t expect him to come three weeks early,” Maynard said.

While she was recovering, Maynard heard that her sister was coming to the hospital to be checked out. Kelley had begun having contractions around 10 a.m. Aug. 2, just hours after Maynard had given birth.

Kelley met with her midwife, who informed her she was going to give birth that day. She was admitted to the hospital just after 3 p.m. and gave birth to her son, Jacob Matthew Kelley, at 4:13 p.m.

Waylin and Jacob are healthy babies and have been welcomed home by their parents and siblings, Maynard and Kelley said. Kaylin enjoys taking care of her brother, and Kelley’s sons “can’t get enough” of the new addition, she said.

Although the mothers have not been able to spend much time with one another since giving birth, they are constantly in contact, Maynard said. They look forward to seeing the two boys grow up together.