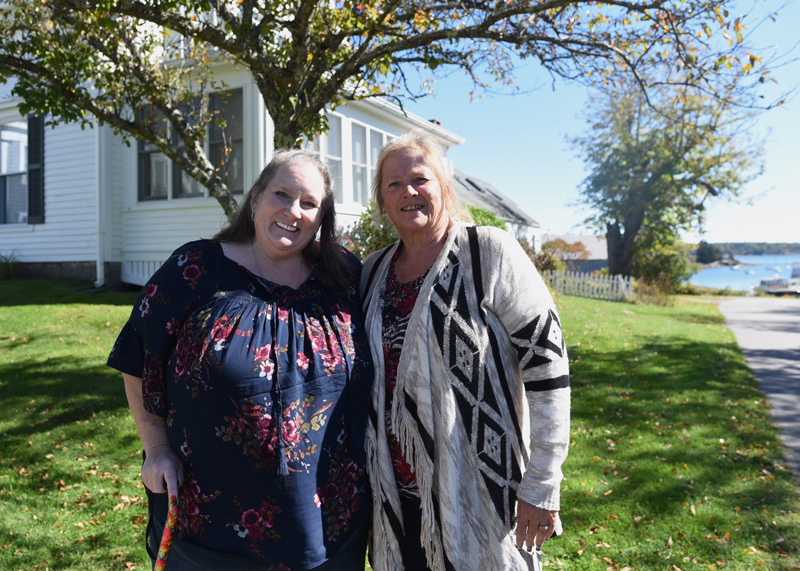 Carolyn Mattern (left) and Liz Michaud stand in front of what was once their great-grandparents’ home in Round Pond on Oct. 5. (Jessica Picard photo)

Two half-sisters who met for the first time in middle age recently traveled to Round Pond in search of answers about their family and past – including the identity of a half-brother.

The women have had “lots of parallels in our lives,” Elizabeth “Liz” Michaud said. She found out about her sister, Carolyn “Sunnie” Mattern, about six years ago.

Mattern and Michaud, who share a biological father, did not meet until they were both married with children of their own. They traveled to Round Pond, once Mattern’s home, the first week of October to visit the grave of one brother and search for another.

Michaud was born in Portland in 1958 to Laura Ett. Mattern and her older brother, Sheldon Scott “Skip” Cushing, were born in Rockland in 1964 and 1960, respectively, to Gail Moore. Mattern and her brother grew up traveling the country with their mother and biological father, Lee Cushing, who was in the U.S. Coast Guard, and settled in Round Pond after he left.

Michaud grew up believing her adoptive father, Jerry Baggett, was her biological father. 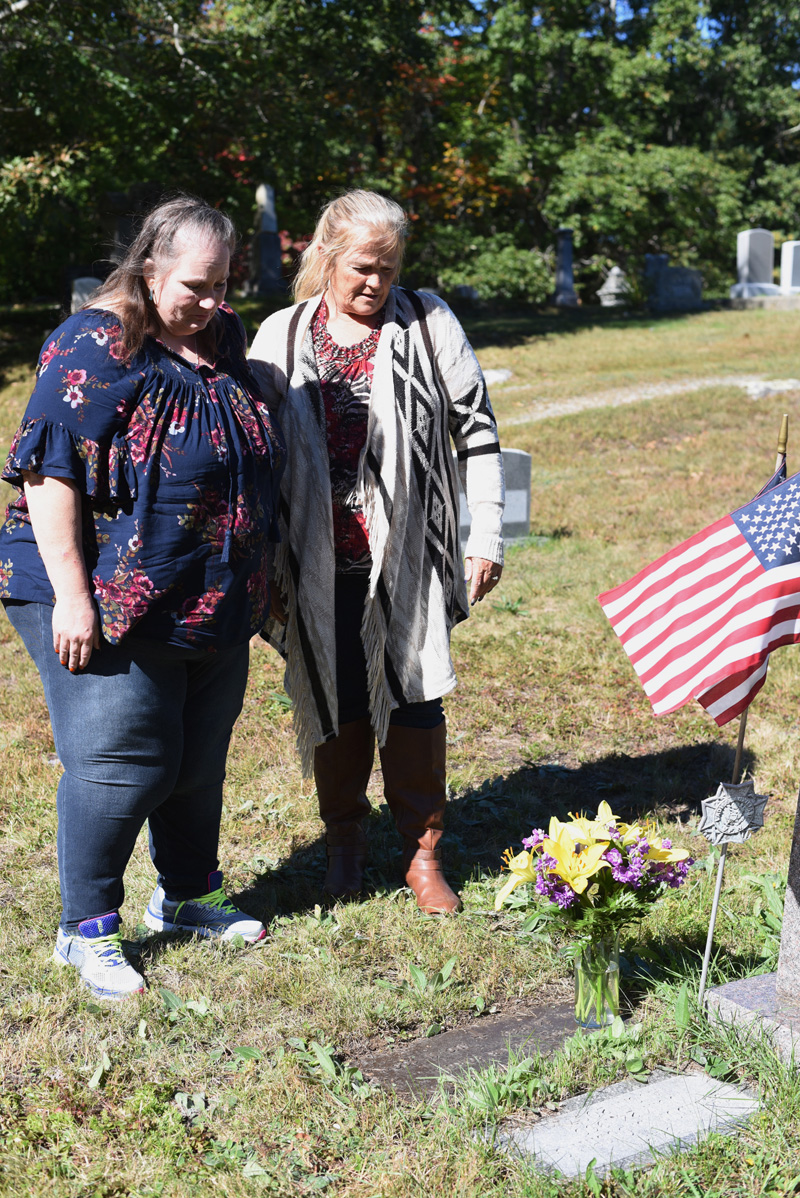 Sisters Carolyn Mattern (left) and Liz Michaud visit the grave of their late brother, Sheldon “Skip” Cushing, in the Chamberlain Cemetery in Round Pond on Oct. 5. (Jessica Picard photo)

She only found out that Baggett was not her biological father through a phone conversation with her grandmother when she was around 55 years old.

Michaud had lived with her grandmother in Windham during her teenage years.

“She said, ‘Did a man come see you?’” Michaud said. Her grandmother said she was talking about Michaud’s mother’s ex-husband.

Michaud said she did not believe her grandmother, but brought it up to her mother on the phone, who confirmed the story.

“There was dead silence. And it happened to be on the anniversary of my dad’s death,” Michaud said of Baggett. “I just lost it, because (Baggett) was my dad … I had two sisters that I grew up with, and they never knew. We didn’t even know that my mom was married before.”

“It was quite the shock at 50-something years old,” Michaud said. “I don’t know how they kept that a secret all those years.”

“I called (my grandmother) a few weeks later and I said, “I have to tell you, I want to thank you, because you’re the only adult that told the truth,’” Michaud said.

Her grandmother has since passed. “She did not want to leave this world without me knowing,” Michaud said. “She was quite the lady.”

Mattern said she first learned about Michaud when she was a child camping with her family, when their biological father, Lee Cushing, took out a photograph.

“(He) had a photograph in his wallet and he took it out and showed Skip and I,” she said. “He was really sad, and he said, ‘This is Betsy Anne.’” Michaud’s full name is Elizabeth Anne.

“He said that he regretted that he signed over his parental rights to her,” Mattern said. “It’s like we always knew about her, but we never had any information.”

Lee Cushing left Mattern’s family when she was around 5 or 6 years old. Her mother remarried, and Mattern has a stepsister who lives in Waldoboro.

“I’m so thankful that (Michaud) had Jerry, and her mom and sisters. She had a happy, happy childhood,” Mattern said.

“I would have loved to have had the chance to tell (Baggett) that that didn’t matter, that he’s still my dad,” Michaud said.

Michaud said she has since talked to her biological father, who now lives in Florida, on the phone a couple of times and met him in person once, but she does not have a relationship with him.

Michaud began searching for relatives on the internet after finding out the truth. She found Skip Cushing’s obituary and her younger sister, Barbara, called Mattern’s mother. Michaud said she was afraid to call for fear she would not want to hear from her.

Mattern’s mother gave Mattern’s contact information to Michaud, who called Mattern. Mattern, now living in New Jersey, called back, unsure of who would be calling her from Maine. 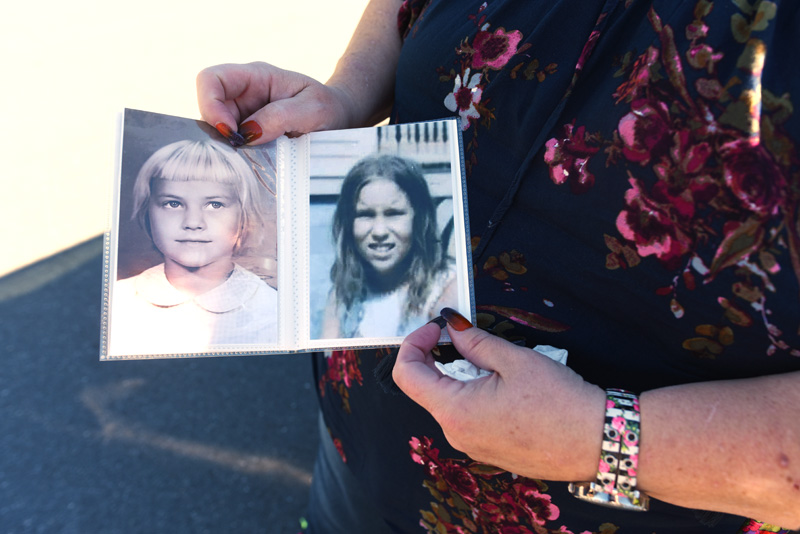 When Michaud said she was her sister, Mattern said she started screaming: “Betsy Anne!”

“I must have screamed her ears right off her head,” Mattern joked. “I was so excited. I never ever dreamt that I’d get to meet her.”

“Finally she stopped me. She’s like, ‘OK, I gotta tell you right now, I am not a Betsy Anne, I am Liz,’” Mattern said, laughing.

They decided to text each other something about themselves every day to get to know each other.

“I’m completely different than she is, but we kind of balance each other,” Michaud said. “If we were seamen, she’d be in the Coast Guard and I’d be a pirate.”

However, the sisters discovered many parallels in their lives. One coincidence is the name Scott. Not only is it their late brother’s middle name, but Michaud, who never met her brother, named her son Scott.

Baggett was in the U.S. Air Force and the women’s biological father was in the Coast Guard, so both families moved around frequently. The sisters realized they may have been in some of the same states at the same time, such as North Carolina, Florida, and Maine.

Mattern now lives in New Jersey with her husband of 30 years, Edward Mattern, and has a daughter and a 2-year-old granddaughter.

Michaud lives in Casco with her husband of 26 years, Dennis Michaud, and has four children and six grandchildren.

The sisters met in person for the first time about six years ago, when Michaud surprised Mattern by showing up to her house for her birthday.

Michaud has since visited her sister in New Jersey three times, but this was the first time Mattern had come to visit Michaud in Maine.

During their week together, the sisters spent some of the time searching for clues about another possible sibling. 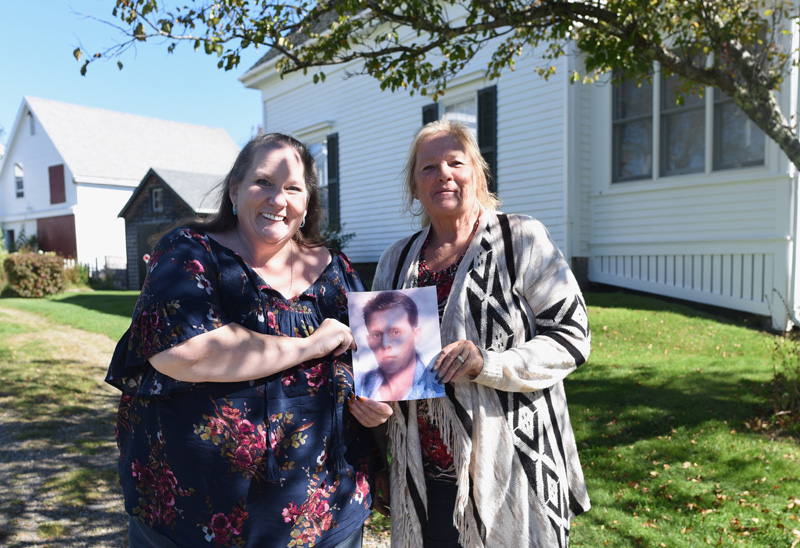 Sisters Carolyn Mattern (left) and Liz Michaud hold a photo of their late brother, Sheldon “Skip” Cushing, in front of what was once their great-grandparents’ home in Round Pond. (Jessica Picard photo)

The sisters believe they have another brother fathered by Lee Cushing. They think he was born in Rockland in 1960 or 1961.

“From what I understand, he lived in Rockland with his mom,” Mattern said.

A family friend in Rockland told Mattern’s mother about the child when she was pregnant with Skip Cushing.

“We have no idea his last name or any of that stuff,” Michaud said. “I would love to find out who he is.”

During their trip, the sisters visited Chamberlain Cemetery in Round Pond to put lilies on their brother’s grave. He passed away of lung cancer in 2007, the same year Michaud’s adoptive father passed.

“I feel like, with Liz with me, going to Skip’s grave, I feel like I can finally put some stuff to rest,” Mattern said. “This is the first time the three of us have been together.”

“He sees us,” Michaud said. “I have no doubt in my mind that he’s smiling away.”

“Skip would have adored her. They have a lot of the same personality,” Mattern said, adding that the siblings would have been “thick as thieves.”

The sisters, along with some of their family members, then visited a home in Round Pond near the Granite Hall Store once owned by their paternal great-grandmother, Clara Hanna, and grandmother, Eleanor Cushing. Mattern used to visit the house while growing up.

The sisters tried to visit other relatives’ homes in the area, but were unable to reach anyone that day.

“I don’t know how many relatives even knew I existed,” Michaud said.

The sisters have ordered DNA kits to see if they will shed any light on unknown relatives. Michaud said she would like to go back to Bristol in the near future, to conduct family research at the library and town office.

In the meantime, the sisters are glad they have connected.

“We found each other, and we’re not only sisters, but best friends,” Michaud said.