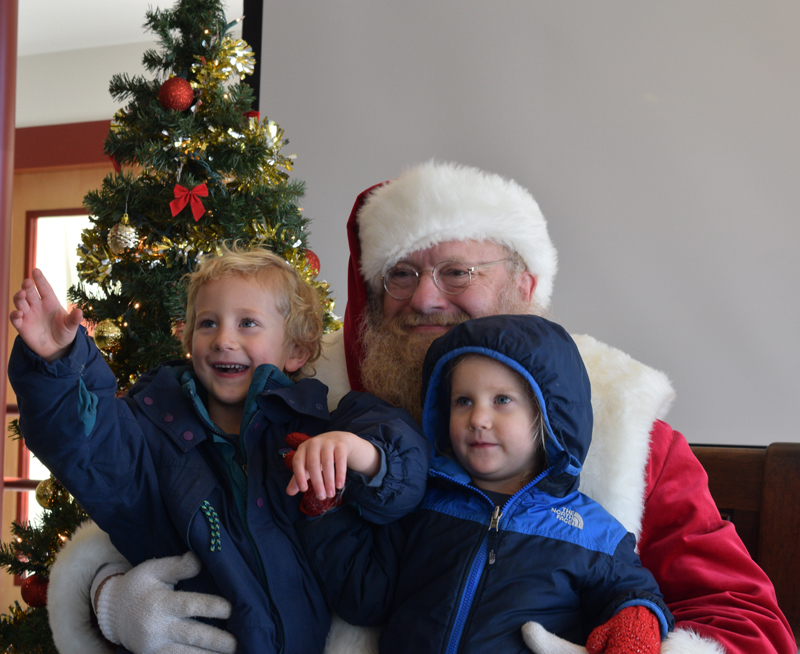 The sixth annual Villages of Light Festival spread the holiday spirit throughout the Twin Villages of Damariscotta and Newcastle with a Santa Claus meet-and-greet, kids’ crafts, a movie, and a parade on Saturday, Nov. 26.

The parade drew an excited crowd of hundreds lining Main Street. It started making its way from Lincoln County Publishing Co. in Newcastle across the Damariscotta-Newcastle bridge to downtown Damariscotta right around the time it started getting dark, shortly after 4:30 p.m.

The colorful lights from the approximately 20 floats, which included businesses, Twin Villages Church, police cruisers, fire trucks, and Central Lincoln County YMCA, sparked the holiday spirit in town as the parade drove past the 70 small trees lining the sidewalks outside downtown storefronts.

Establishments could pay $100 to for a tree that came with several strands of lights. Larger evergreen trees were also deployed at Veterans Memorial Park in Newcastle and at First National Bank and Coastal Rivers Conservation Trust’s property at Round Top Farm in Damariscotta.

Santa Claus was once again the star of the parade, receiving several excited waves and shouts from children and adults alike.

Santa Claus also made an appearance earlier in the day at Lincoln Academy in Newcastle, where kids waited to tell him what presents they want for Christmas. The events were held at LA this year, rather than the Lincoln Theater, because the theater was hosting Lincoln County Community Theater’s production of “Halfway There,” according to Damariscotta Region Chamber of Commerce and Information Bureau Executive Director Lisa Hagen.

A few craft tables were set up to keep children occupied while waiting for an audience with Santa Claus. LA students sold hot cocoa as a fundraiser and Rising Tide Co-op donated popcorn and chocolate chip cookies to serve at the event.

Hagen said that about 70 people came through to engage in the festivities, with some showing up right at the beginning of the event at 11 a.m. to line up for Santa. Afterward, “The Muppet Christmas Carol” was shown for families.

Villages of Light will return in 2023. Anyone interested in volunteering should email villagesoflight@gmail.com.

For more information about Villages of Light, find the event on Facebook.