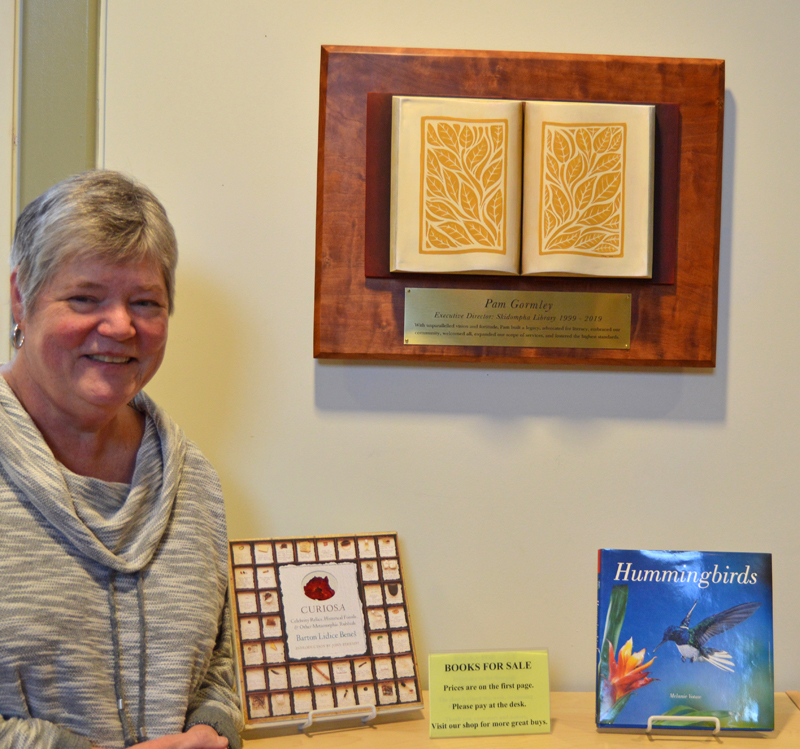 The high-pitched whine of a lone trumpet signaled the arrival of her majesty, the queen, as she descended the Skidompha Library staircase to bestow damehood upon the library’s outgoing executive director, Pam Gormley.

The “queen,” played by former library employee Torie DeLisle, bestowed the honor upon Gormley by placing a tiara on her head with 200-plus friends, family, co-workers, and acquaintances looking on and “God Save the Queen” playing in the background.

The royal ceremony was just one of many enthusiastic tributes to Skidompha’s 20-year executive director during an open house and retirement high tea held in her honor Sunday, May 19.

Filler ran down the extensive list of Gormley’s accomplishments at the library and all the community happenings the library is currently facilitating, including: the River Company staging plays, the Midcoast Unitarian Universalist Church calling the library home, Maine Coastal Senior College holding classes there, and the silent auctions held to benefit various causes.

Filler also pointed out all the community services Skidompha has provided over the years, such as teaching community members how to use computers and providing tickets for nearly every event in town over the past 18 years.

“Pam has also made Skidompha the living room of the town … Pam is widely respected in the community and is sought out as a board member. She is smart, eloquent, has a terrific sense of humor, and a heart of gold,” Filler concluded to a round of applause.

Filler also listed Skidompha’s various awards and commendations earned over the years, perhaps the most impressive of which is the National Medal for Museum and Library Service, the highest national honor given to libraries, which Gormley traveled to Washington, D.C. to accept in 2008.

“A few people wrote to the Institute for Museum and Library Services and they invited us to apply. What seemed to stand out for them was our programming and our commitment to the community,” Gormley said in an interview.

Skidompha has also been classified as a Star Library by the Library Journal since 2010.

Nationwide, only 258 libraries of 7,400 rated were given the star designation, which is based on per capita data measuring the circulation of books, library visits, program attendance, and public internet computer use.

Bill Bausch, a past president of Skidompha, spoke after Filler on Gormley’s commitment to the library, her teaching skills, and her hardworking nature.

“She made it easy for me as board member, eventually president, to keep the wheels on and the lights on, because she’s a great teacher and she just makes everyone do what they have to do,” Bausch said.

A sculpture of a book lying open with golden leaves embossed on its pages was presented to Gormley. The sculpture and the plaque it is mounted were crafted by Damariscotta-based artist Jacques Vesery.

An inscription on the gift reads: “With unparalleled vision and fortitude, Pam built a legacy, advocated for literacy, embraced our community, welcomed all, expanded our scope of services, and fostered the highest standards.”

Then came the surprise arrival of her royal highness.

Gormley said she was surprised by everything about her retirement tea, especially the whole damehood bit. She said all she knew was that she had to show up for tea on Sunday and she was wholly unaware of the number of people planning to attend or the festivities that were scheduled.

The celebration “was stunning for me in so many ways: the number of people that were here and who they were, people I haven’t seen in 20 years, people that I worked shoulder to shoulder with for years, and everyone in between. It was an amazing, amazing day for me,” Gormley said.

Gormley will retire at the beginning of July, when the incoming executive director, Matthew Graff, officially takes over. Graff will start work June 3, but Gormley will work alongside him for a month, helping him get the lay of the land at Skidompha. 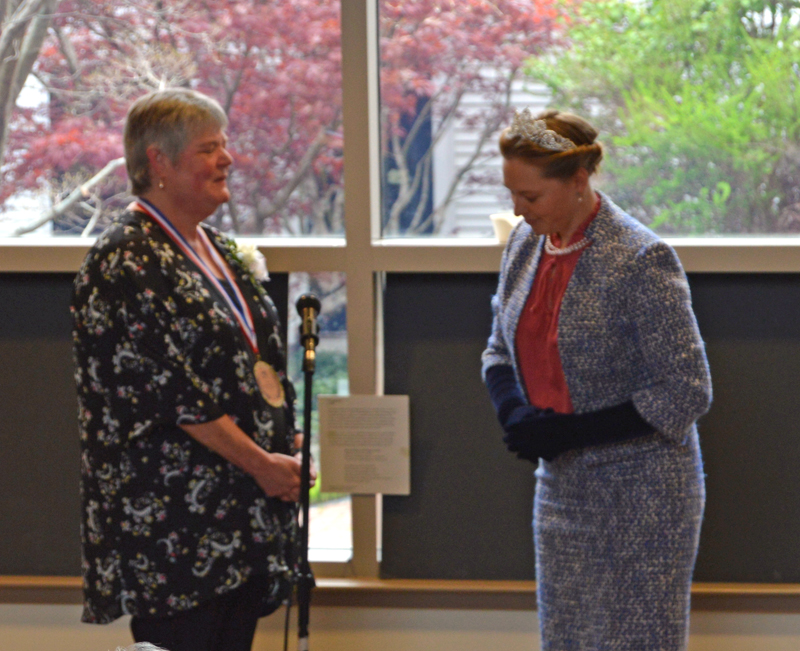 Graff is leaving his position as executive director of the Cohoes Public Library in New York to head to Skidompha.

Gormley started her time at Skidompha in 1999, when she was part of the capital campaign for the construction of the current library building. The current director of the library was retiring and Gormley was on the search committee for a new executive director.

“At some point, they asked me to step off the committee and interviewed me for the job. And here I am, 20 years later,” Gormley said.

Before the library, Gormley held a job with Reader’s Digest for 25 years, where her most recent title was director of international marketing systems. Her background is in business management, but she has always had a passion for libraries and literature, ever since her childhood growing up in the Bronx in New York City.

“I got my first library card when I was 7 years old. And my mother used to let me go to the library by myself. And I lived in the city, so it was just a question of walking to the library,” Gormley said.

After giving birth to her last child in 1994, Gormley decided she did not want to work in the corporate world anymore. The family bought a house, packed up, and moved to Maine. She worked at various part-time jobs before happening into her cherished position at Skidompha.

Gormley also talked about her wish to see The Lincoln County News digitization project completed before she leaves the library. Skidompha has been working with LCN since December 2017 to secure the funding to accomplish the digitization and preservation of every edition of the newspaper and make it available in a searchable database.

Some 100,000 pages of the newspaper are currently with a company in Iowa undergoing the digitization process.

“They’re smart, they’re dedicated, they know what they’re talking about, and we enjoy each other’s company,” Gormley said of her co-workers. “And the people that come and want to talk about what they read and want to share parts of their life with you. What could be better?”

Gormley’s current retirement plans involve fixing up her and her husband’s Damariscotta house so it can be put on the market eventually. She looks forward to all the painting that must be done, as well as frequent trips to the beach in between coats.