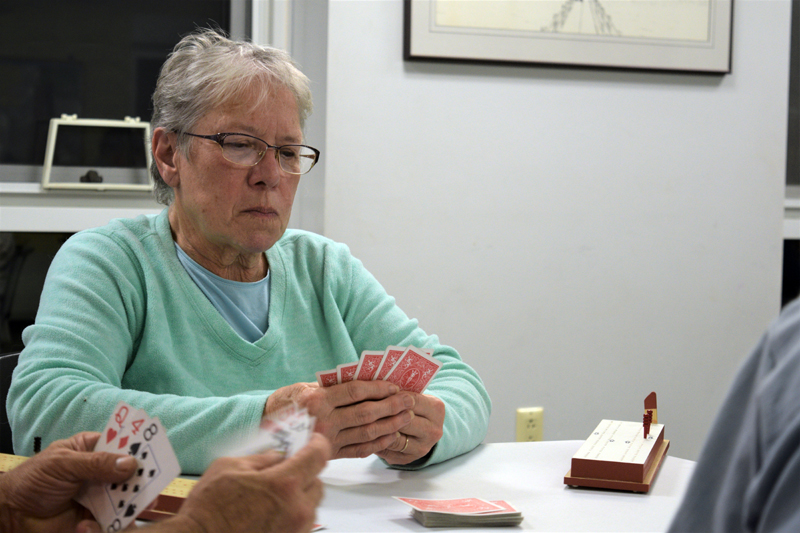 Ruth Gilbert looks intently at her cards as she contemplates which one to toss to the crib at the Wiscasset Senior Center on Sept. 30. (Nate Poole photo)

Every week The Lincoln County News publishes the top three scores from the Wiscasset Senior Center’s cribbage games on Tuesday and Thursday.

I, being 23 years old with only a cursory understanding of the game, decided to meet some of the people behind the scores and test my mettle against the best the county has to offer on Thursday, Sept. 30.

While the age of admission to be a member of the senior center is 50, all ages are welcome to the cribbage games. Games begin at 9:30 a.m. on Tuesdays and 6 p.m. on Thursdays, and many are committed enough to be found there each week.

The original Wiscasset Cribbage Club was created on Oct. 5, 2004, and began meeting on Tuesday mornings under the guidance of Linden Simmons, a lifelong cribbage player who passed away in April. The games have been a trademark of the center ever since.

Each player puts up $1.25 to play, good for seven games and the chance to win it back, along with the rest of the pot.

Before the crowd arrives, Pam Frenier and other regulars usually set out some food while Joe Campbell sets out cards. As waves of ebullient members roll in, they each pick a card that will tell them at which table to sit and who their partner is.

Simmons was Campbell’s father-in-law, and while Campbell, a little younger than many of the attendees, started playing because of Simmons, he’s remained a fixture at the games for about three or four years now.

“I came because he wanted me to come. So I just kept coming,” Campbell said.

Attendees usually play four-player cribbage, where each player shares pegs (or pieces) with the player opposite them. The pairs play a game at each table, and whoever loses moves onto the next table while the winners stay. All players pair up with different people after each game regardless, so they stay moving.

For my first game, I found myself paired with Marge Pooler up against Joan Grondin and Ruth Gilbert. The three of them made for a fast talking, and even faster playing table, and it became clear to me that half of the fun of cribbage at the senior center is the humor and light trash talking.

“Pam said we have to behave ourselves,” Gilbert said to the table.

“That means you can’t have any fun,” Grondin shot back, to their collective mirth.

I mentioned to Gilbert that I was a little uncertain of the kind of welcome I’d receive as a young newcomer, and she pointed to Stuart Wyman across the room and told me that he too didn’t come to cribbage because he didn’t think he was old enough.

He only started attending when he turned 72.

Gilbert was kind enough to patiently walk me through the nuances of four-player versus two-player cribbage when I first sat down. She told me that some of the cribbage regulars could be ruthless. I asked if she was one of them.

I only found upon inspection of the prior week’s paper that, despite her “mediocrity,” Gilbert had beaten everyone the previous Tuesday with a score of 830.

As patient as everybody was with me as I counted and miscounted my points, barely keeping up with the pace of each game was about the best that I could manage. It became painfully clear to me how outmatched I was as Gilbert and other players informed me of how many points were in my hand well before I’d even begun counting.

Larry Rines, chairman of Wiscasset Senior Center Board of Trustees, was another regular who I played with for a few rounds. He and his partner pulled far ahead of me and my then-resigned partner Ken Colby, who had won last Thursday’s cribbage night.

At one point, as I labored to calculate my points in hand, Rines pointed to where the holes on the cribbage board curve for the second time.

“Those are important points because you’re headed towards the skunk hole,” he said.

The skunk hole, or “skunksville,” is hole 90 on a cribbage board, located at the end of the second curve. The skunk hole is very important because if one does not manage to get their sorry peg past the skunk hole, they’ve been “skunked,” or beaten by 30 points or more.

This is roughly the equivalent of being “dunked on” in basketball.

Rines explained that if two players are betting on a game of cribbage, whoever gets skunked has to pay double.

Luckily, the action at the senior center is a little more forgiving, as Colby and I were quickly skunked.

The seniors are eager to welcome new faces to their cribbage games, and they are more than happy to help those who are less familiar with the rules. There were two new faces on Thursday night, between myself and Ken Flower of Bristol, but while I skunked my way through seven games, Flower cleaned up.

He joined the gym at the Wiscasset Community Center a couple of weeks prior and while looking for other activities to take advantage of he discovered the cribbage games. After doing so well during his first visit, he said that he definitely plans to keep coming back.

Teasing assertions of beginner’s luck were thrown around the room, but Flower is anything but a beginner. He told me that his father first taught him to play when he was four or five.

Flower is far from an anomaly in this regard, new players can expect a fun couple of games, but not easy ones. These folks weren’t born yesterday, after all.

For more information about the Wiscasset Community Center and Senior Center events, go to wiscassetrec.com.