A crosswind caught a small aircraft and caused it to skid off the runway and into the snow at Wiscasset Municipal Airport on Sunday, Dec. 17, according to Wiscasset Police Department Sgt. Craig Worster. (Alexander Violo photo)

No injuries were reported after an ultralight aircraft slid off the runway during takeoff at the Wiscasset Municipal Airport the afternoon of Sunday, Dec. 17.

According to Sgt. Craig Worster, of the Wiscasset Police Department, the aircraft was on the runway when a crosswind pushed it off the runway and into the snow. The pilot, Charlie Gabelmann, was the sole occupant of the aircraft.

Worster said the Federal Aviation Administration and the National Transportation Safety Board have been contacted regarding the incident.

According to interim Airport Manager Rick Tetrev, the plane was nearly broken in half by the crash, but he believes the damage is repairable. 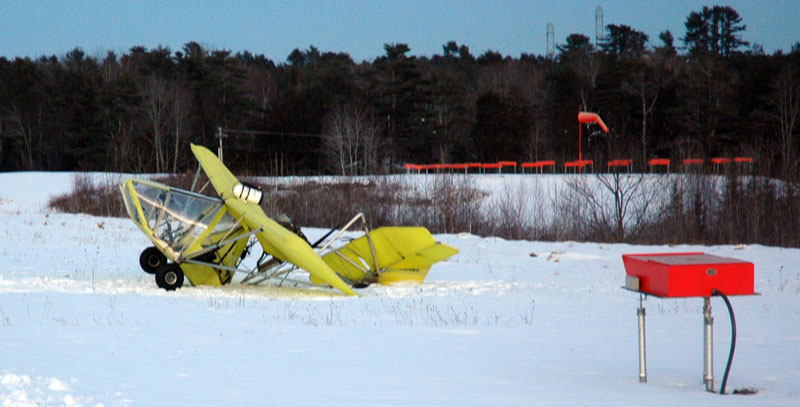 A small aircraft slid off the runway at Wiscasset Municipal Airport the afternoon of Sunday, Dec. 17. No injuries were reported, according to the Wiscasset Police Department. (Alexander Violo photo)

Tetrev said operations at the airport were shut down until around 4:30 p.m., when the aircraft was cleared from the runway and access to the airport returned to normal.

“The first thing we do is call the tower in Portland and put the word out. We had to wait for clearance from the FAA to remove the airplane and once it was removed, operations went back to normal,” Tetrev said.

Tetrev identified the pilot as Gabelmann and said he keeps the aircraft in a hangar at the airport.