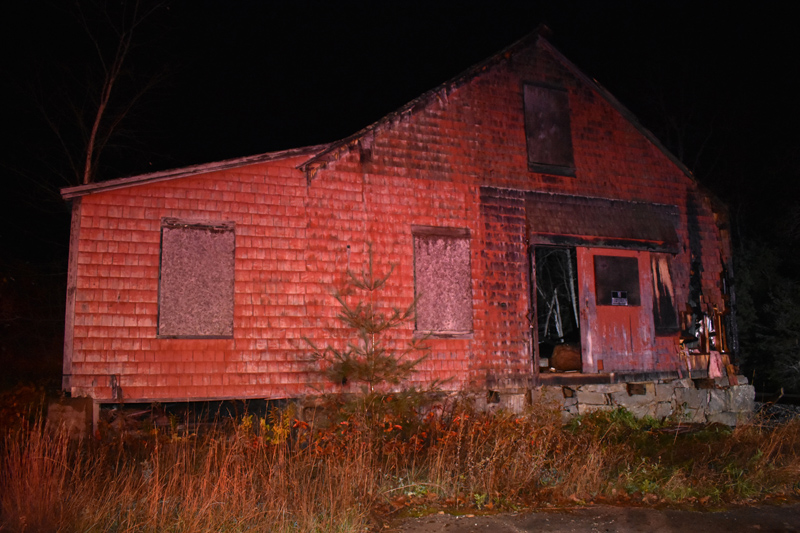 A fire was intentionally set at a vacant building at 115 Cross St. in Waldoboro on Saturday night, according to the Maine State Fire Marshal’s Office. (Alexander Violo photo)

The Maine State Fire Marshal’s Office says a fire at a vacant building in Waldoboro on Saturday, Oct. 26 was intentionally set.

“The investigation is ongoing and we are trying to identify the person or persons responsible,” Sgt. Kenneth Grimes said.

Firefighters quickly put out the flames at the derelict building, the rear and sides of which had collapsed years ago. The building, a former Agway store, is at 115 Cross St., next to the railroad tracks.

A Jefferson tanker was first to arrive. “Jefferson put the nozzle to it and we chased embers after that,” Waldoboro Assistant Fire Chief Mark Stults said.

“It was a small fire. We were able to use the water off of the trucks to put it out,” Stults said.

The fire was limited to the corner of the structure closest to the railroad tracks, charring the front of the building before it was extinguished, Stults said.

In the early 1980s, the store moved into a new building on Winslows Mills Road, now home to Resolutions Fitness Center.

The building on Cross Street has long since fallen into disrepair.

“There were a few things inside, some lumber, but it had been dilapidated and not used for anything in a while,” Stults said.

Also responding were the Damariscotta, Jefferson, and Nobleboro fire departments, in addition to Central Maine Power Co. and the Waldoboro Police Department. Fire crews cleared the scene around 10:15 p.m.