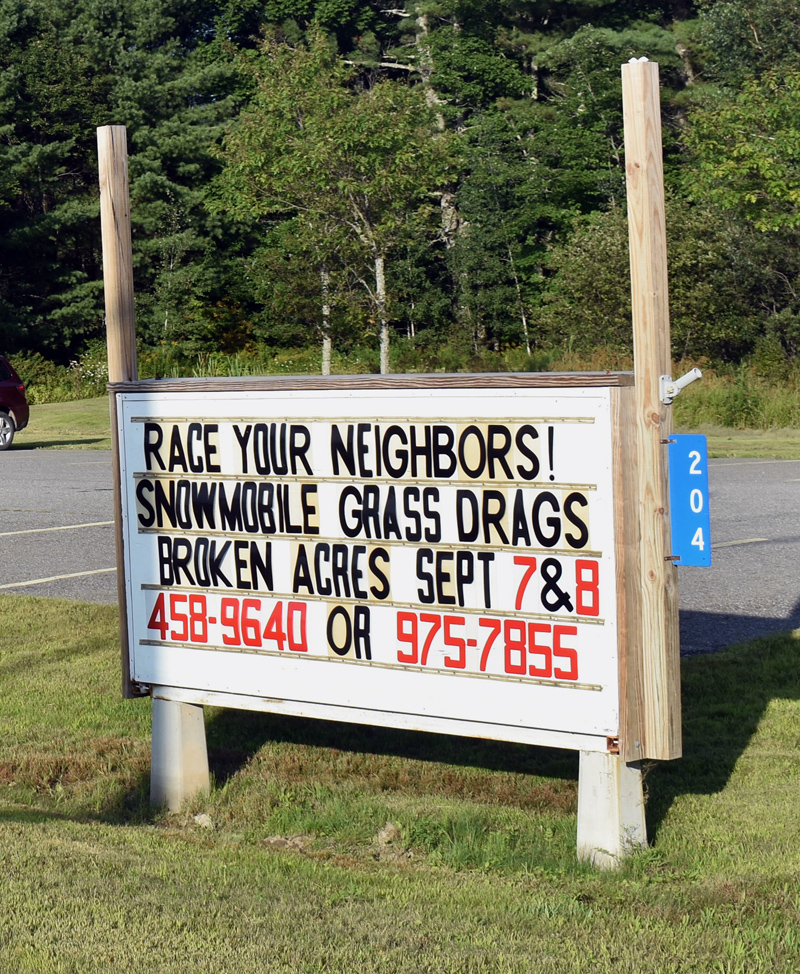 A sign at the Jefferson fire station advertises upcoming snowmobile “grass drags” at Broken Acres Family Retreat. The sport is growing in popularity, according to organizers. (Alexander Violo photo)

A unique event combining snowmobiles with summer is returning to Jefferson for a second year.

Jefferson First Responders will provide emergency medical services coverage for the event, according to Morris, who said the Lincoln County Sheriff’s Office will help out as well.

Morris said the event features racers who compete in a professional circuit throughout the Northeast, in addition to races open to local participants. The plan is to also have activities for kids, such as miniature snowmobiles.

“They’ve built a nice track. We’ve been over to water it. The grass is growing nice,” Morris said.

“We hope people come out and get a chance to race their neighbors,” Dawson said.

The sport is growing in popularity, he said. The Jefferson event was organized last year because there weren’t other competitions close to Lincoln County.

“Before, the only other grass drags in the state were in Hermon,” Dawson said.

“We are trying to get something going here,” Dawson said. “We had a good turnout last year and are expecting better this year. We’re hoping local people show up.”

The professional sleds can reach speeds of up to 120 mph over a distance of 500 feet.

“It’s a sight to behold if you have never seen it,” Dawson said.

Dawson credited his fellow organizer, Weeks, and the property owner, Johnston, for their help in making the event a reality for the past two years.

“I wanted to race and was looking for a place to do it. Really, that is what it is all about,” Dawson said.