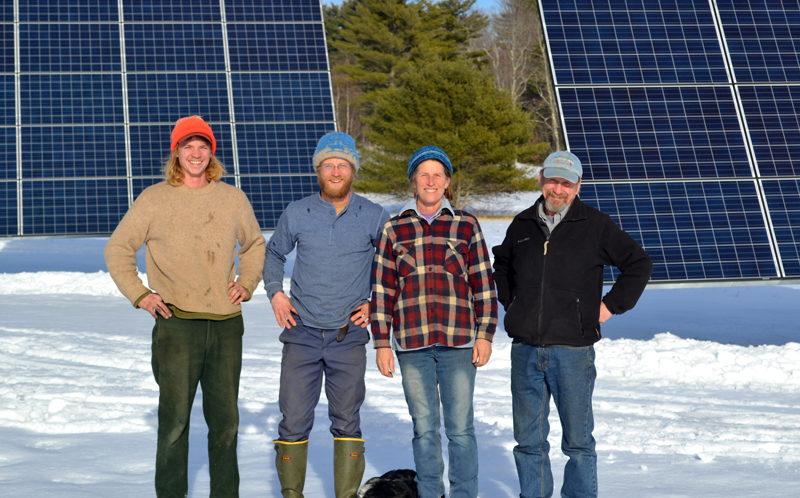 As a farm in Dresden passed from one generation to the next, it transitioned from harvesting potatoes for the wholesale market to producing a range of organic crops available year-round through the wholesale market, direct sales, or the farm’s community-supported agriculture program.

When ownership of Goranson Farm passes from Johanson and Jan Goranson to their children, Carl and Goran Johanson, the family hopes the solar installation will have eliminated a significant operational cost for the farm and will help ensure it is environmentally, agriculturally, and economically sustainable, Johanson said.

The solar array was made possible by a U.S. Department of Agriculture grant combined with a loan from Coastal Enterprises Inc., Johanson said. The loan payments were structured so as not to exceed the farm’s pre-installation electricity costs, and the farm hopes to pay off the loan in about six or seven years, he said.

A separate USDA grant will enable Goranson Farm to install a reverse osmosis machine to reduce the amount of firewood it needs to produce 400 gallons of maple syrup each season.

Typically, Goranson Farm burns about 16 cords of firewood during maple syrup season. The machine, which uses a process of pressure and filters to extract water from sap, is projected to reduce that number to 6 cords.

The grants were secured with the help of Richard Simon, of The Power Co., a Washington-based solar energy company, Johanson said. Simon is familiar with the grant application process and helped Goranson Farm apply for both grants.

Goranson Farm had been considering going solar for two to three years before applying for the grant, Johanson said.

The political debate about net metering, a billing credit that compensates owners of solar installations for the energy they produce for the grid, pushed Johanson to complete the project quickly, so the installation would be grandfathered in before a change in the rules, he said.

The farm’s first grant application was unsuccessful, but in the next grant cycle, Goranson Farm secured about $17,696 to go toward the purchase of a solar array, Johanson said. The funding fell short of what was requested, but with a loan from Coastal Enterprises Inc., the installation, which cost about $150,000, was completed.

“We’re naturally inclined to be socially responsible people,” Goranson said of the decision to go solar. Goranson Farm was founded by Jan Goranson’s parents, who moved to Dresden from Aroostook County in the 1960s, attracted by Dresden’s fertile farmland.

Goranson Farm was initially devoted to potatoes, a crop that earned Jan Goranson the nickname “the potato lady,” Johanson said. In the 1980s, Johanson and Goranson bought the farm, which grew to become highly diversified with a large array of fruits and vegetables. 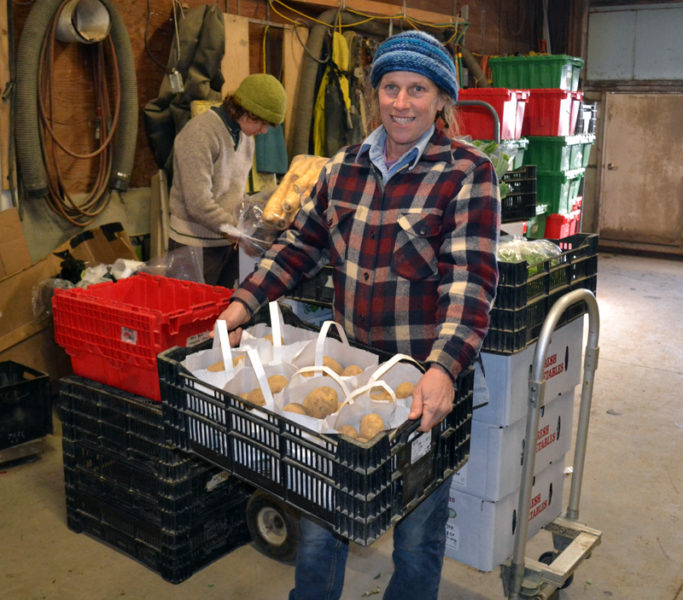 Goranson Farm cultivates about 80 acres of organic produce. The farm owns some of the acreage and rents the rest from the neighboring Green Point Wildlife Management Area.

For the health of the soil, cash crops are grown on only about half of the farm’s acreage, with “cover crops” – crops planted to manage soil erosion, fertility, and quality – grown on the remaining acreage.

The land devoted to cash crops and cover crops is rotated every couple of years, Johanson said.

“It’s an expense to have half the farm out of production each season, but that’s what’s needed for the sustainability of the land,” he said. “We’re about producing the most nutritious food we can for the community.”

The farm also raises chickens, turkeys, and pigs for meat.

The electricity involved in maintaining the temperature of the farm’s cold storage facility, which enables the year-round availability of its crops, will now be covered by the solar array, Goranson said.

“One major expense will be taken care of,” she said, but the benefits are more than just economic. The solar array is another extension of Goranson Farm’s commitment to sustainability, Johanson and Goranson said.

For more information about Goranson Farm, go to goransonfarm.me or call 737-8834.