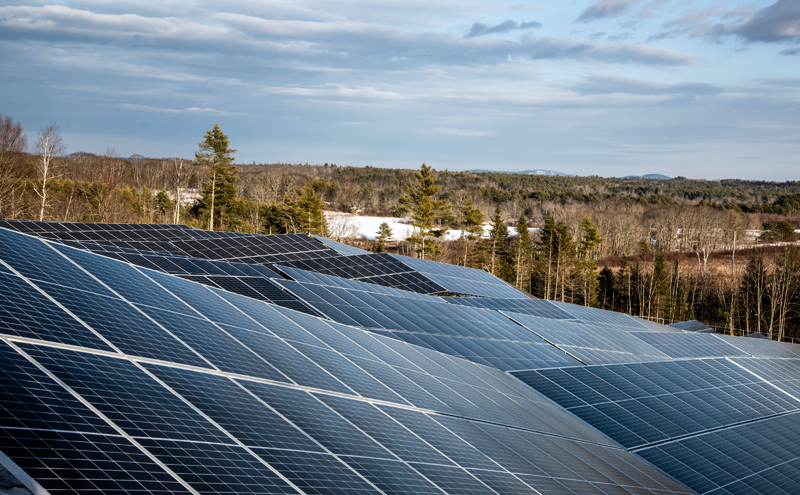 Solar panels work with the topography of the site at the SunRaise solar garden in Waldoboro on Dec. 22. Metal rods tipped with screws are driven 4 feet into the granite ledge to stabilize the large panels. (Bisi Cameron Yee photo)

Construction on the SunRaise solar garden on North Nobleboro Road in Waldoboro is complete, with plans for the installation to come online around March or April.

The 10-acre field has 200 solar panels covering 8 acres of the property. According to SunRaise, the panels are capable of generating 3 megawatts of power, enough to furnish electricity for 600 homes over the course of a year.

According to Joe Harrison, director of project development for SunRaise Investments, the company built the solar garden on land rented from Waldoboro farmer Travis Reed. Reed continues to use the bottomland as pasture, but rented the 10-acre woodlot at the top of the property to SunRaise for 20 years with three five-year extension options. 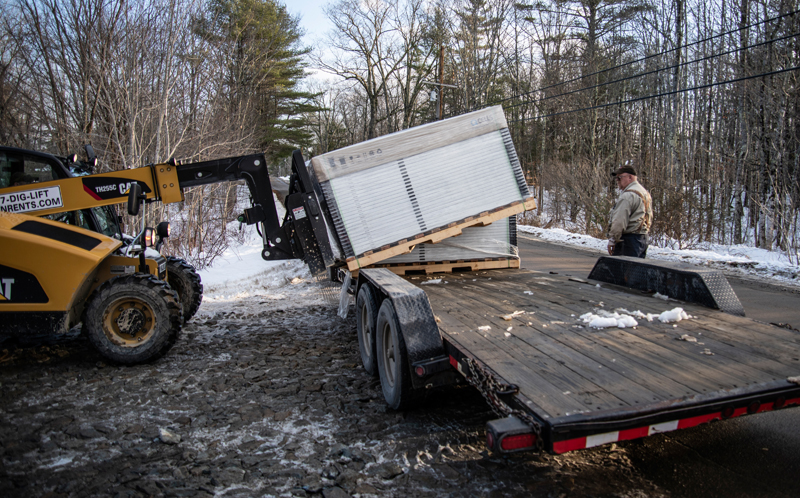 The last batch of solar panels is delivered to the SunRaise solar garden in Waldoboro on Dec. 22. (Bisi Cameron Yee photo)

Harrison said the property is among the most challenging solar building sites in Maine due to its topography and the hard granite ledge that runs under the surface of the land. He said that SunRaise did not want to spend a lot of money reshaping the earth, so it intentionally worked with the topography of the land — the ranks of solar panels seem to undulate along the hills. This not only saved the time and expense of grading the land, but also allows for the possibility that the land can revert back to its natural state should the installation be removed.

As a company that touts itself as a source of green energy, SunRaise has been mindful with its use of the land. Harrison said the company built a small bridge to protect a small section of wetlands on the site. And once the build is complete, SunRaise will lay bark mulch and ground stumps under the panels to contain runoff from the site.

“The farm could last for 40 years,” Harrison said. “The panels are warrantied for 25 years with a degradation rate for the individual cells of approximately (0.5%) per year.”

Harrison said that there is “less and less dependence on fossil fuel — we have wind, hydro, solar. In Maine we are surrounded by diverse options, and that’s good.” 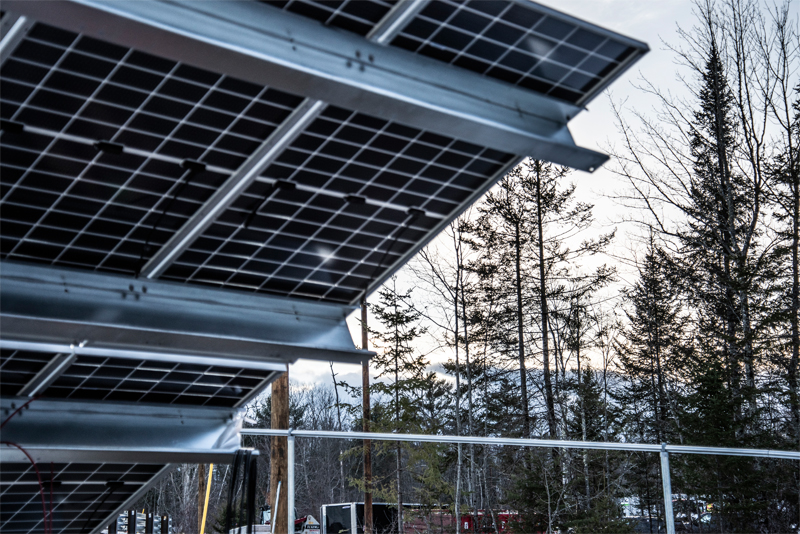 Reflected sunlight glints off the bottom of a solar panel at the SunRaise solar garden in Waldoboro on Dec. 22. (Bisi Cameron Yee photo)

The power from the Waldoboro site is already sold, with 85% going to two large commercial customers: Bigelow Laboratory for Ocean Sciences, of East Boothbay; and Pine State Trading Co., of Gardiner, a distributor that supplies convenience stores in Maine. The remaining 15% was earmarked for sale to small businesses.

While SunRaise does have solar farms in the Midcoast that provide power to homes, there is no residential service at the Waldoboro site. SunRaise currently has five additional projects under construction in Maine and has plans to build up to a dozen more in 2021. None of those will be in Lincoln County.

In a phone conversation, Patrick Jackson, senior vice president of project development for SunRaise, described the benefits of solar energy to consumers.

“Customers agree to purchase power at a discount, with no money upfront,” Jackson said. “This allows customers to purchase clean energy with no large capital investment and without having to build panels on their own property. It can save meaningful amounts of money.”

Jackson, based in Yarmouth, is one of the founders of SunRaise. The company has been in business for over a decade and has several dozen farms in New England, as well as one in California. He credits a 2019 solar energy bill with spurring a lot of investment in Maine. 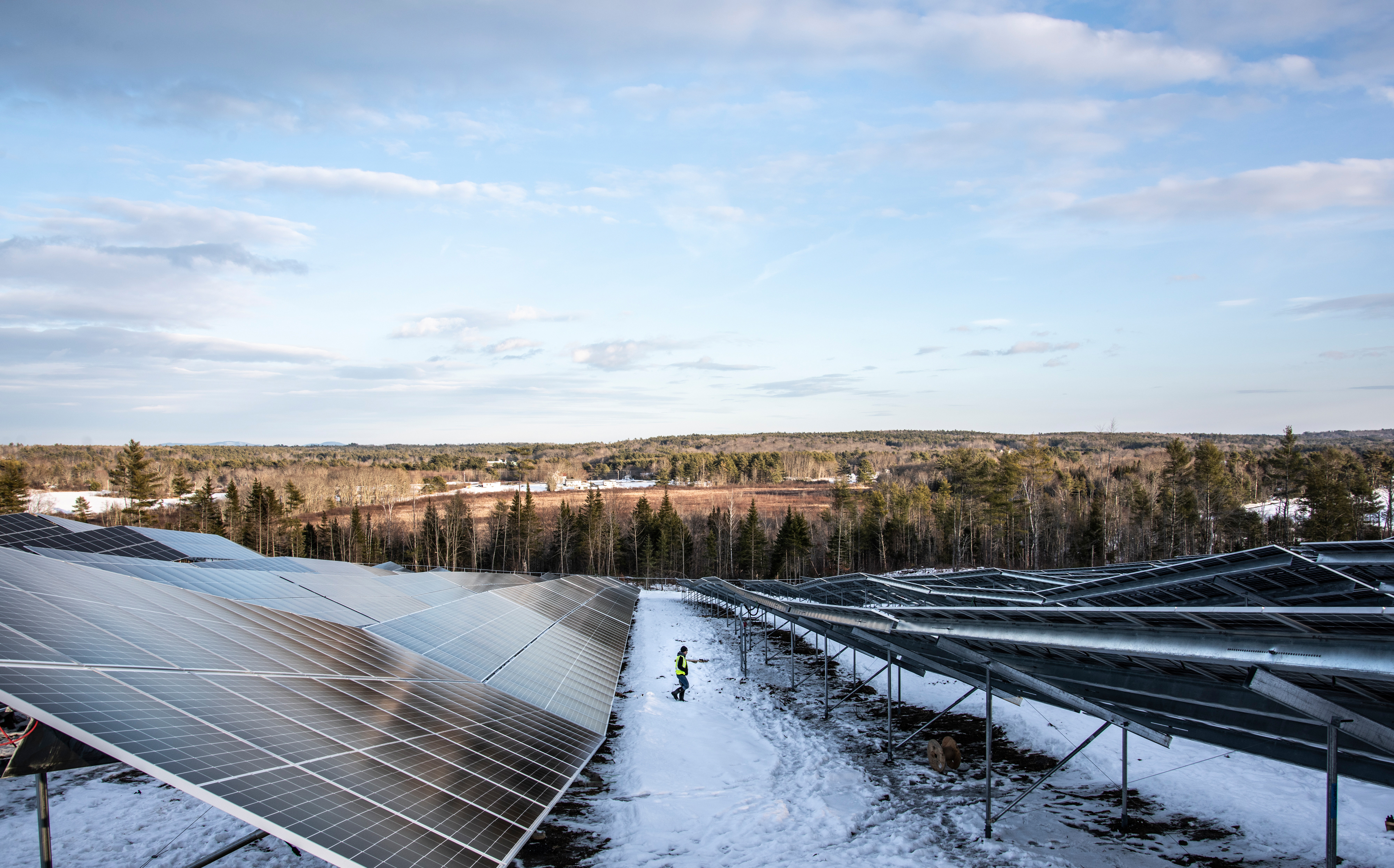 A worker walks between rows of solar panels at the SunRaise solar garden in Waldoboro on Dec. 22. About 60 people worked on the construction of the site. (Bisi Cameron Yee photo)

“The energy markets are state-to-state regulated markets,” Jackson said. “Prior to the Mills administration, there was not a framework that allowed community solar to really exist in Maine.”

Former state Sen. Dana Dow, R-Waldoboro, sponsored the 2019 bill. Dow, reached by phone at his home in Waldoboro, said the solar industry asked him to sponsor the bill because “they know my record on environmental issues.” Dow said that he had the highest conservation score of Republicans in the Senate and was “happy to sponsor the bill.” 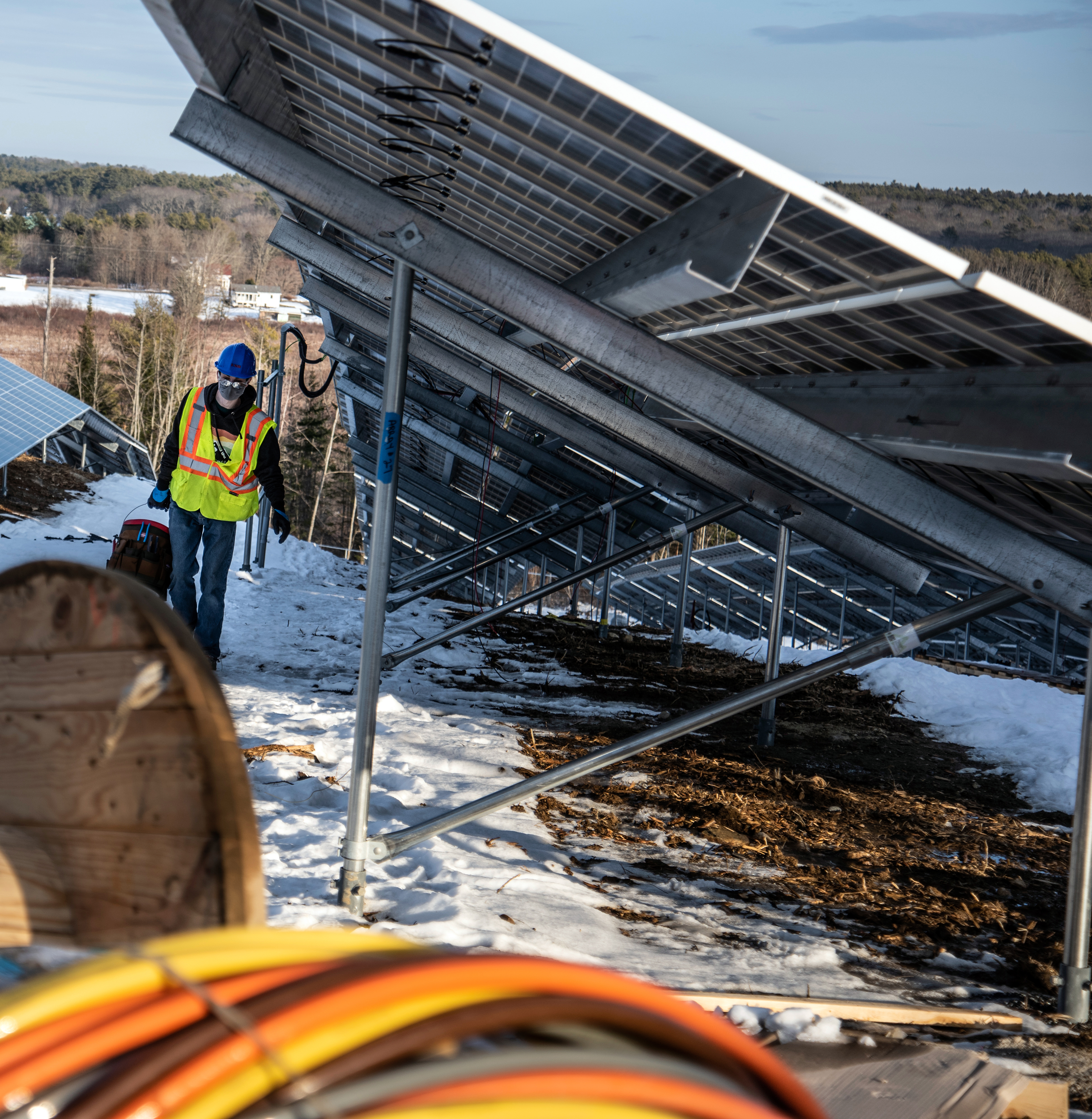 A worker walks past solar panels at the SunRaise solar garden in Waldoboro on Dec. 22. The panels degrade at a rate of 0.5% a year and have 25-year warranties. (Bisi Cameron Yee photo)

Dow saw it as a good business investment, with “over half a billion dollars invested in the state of Maine, and at least seven projects in Knox and Lincoln County.” He added that “it took the handcuffs off the power industry and allowed 200 participants to take part instead of five.”

“Up till now we haven’t had a choice in how to get our electricity,” Jackson said, as he enumerated the benefits of solar power to local communities, from long-term savings to the value to the environment.

“Solar ushers in a large number of in-state jobs. Five projects can equate to 300 high-paying temporary construction jobs that can last up to five months each. The jobs are location-specific — they cannot be exported,” Jackson said. “Clean energy projects are almost all built in fields. This allows construction projects to continue safely during the pandemic while other industries have had to halt projects.”

Referring to potential downsides to solar power, Jackson said, “It’s a highly proven technology, but it takes policy to allow it to thrive in any given geography.”

Gov. Janet Mills’ “strong support and vision for clean energy in Maine — she is a leader in this — is creating jobs and projects that the state and the environment needs,” Jackson said.

As far as the visual impact of solar panels on the rural landscape, Jackson, who is passionate about the environmental benefits of solar, believes that “beauty is in the eye of the beholder.”

“Maine has more land than the rest of New England combined, and not much population,” Jackson said. “Solar farms should not be situated in mature, large blocks of land and they typically can’t be because of reliance on utility lines. Rural lands don’t have the necessary infrastructure.” He said that 0.05% of the land mass in Maine can produce 3 gigawatts of solar energy, enough to power approximately 500,000 homes for a year.

Paul Kando, of Damariscotta, has been involved with solar energy as a researcher here and in Europe since 1973. “It was an uphill fight,” he said in a phone interview, referencing the early days when solar energy was much more expensive. 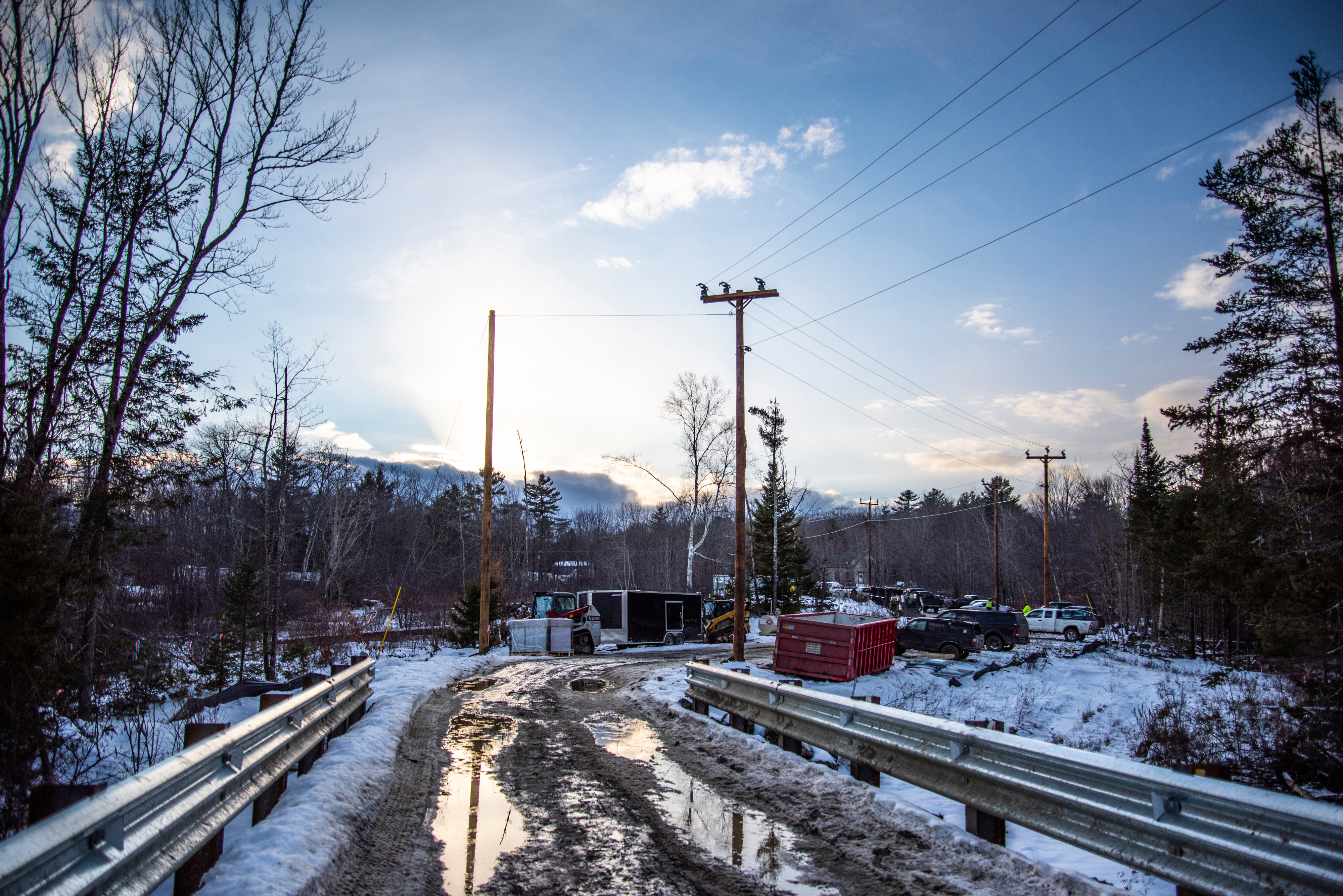 A bridge spans a small area of wetlands on the site of the SunRaise solar garden in Waldoboro on Dec. 22. The developer has taken steps to defray the ecological impact of construction. (Bisi Cameron Yee photo)

Kando, citing statistics from the International Renewable Energy Association and the financial advisory firm Lazard, said that the cost of solar energy has dropped from $378 per megawatt-hour in 2010 to $68 per MWh in 2019.

While he cautions against covering otherwise useful land with solar panels, Kando said that there are a number of creative and viable options in the works for generating solar energy.

“We can focus more on solar collectors on homes and buildings, covered parking lots, in the medians of highways,” he said. He mentioned future possibilities of solar paint and energy-collecting window glass. “There are many, many opportunities.”

(Correction: An earlier version of this article online and on the front page of the Jan. 7 print edition incorrectly identified Paul Kando as a resident of Edgecomb. He lives in Damariscotta. The Lincoln County News regrets the error.)