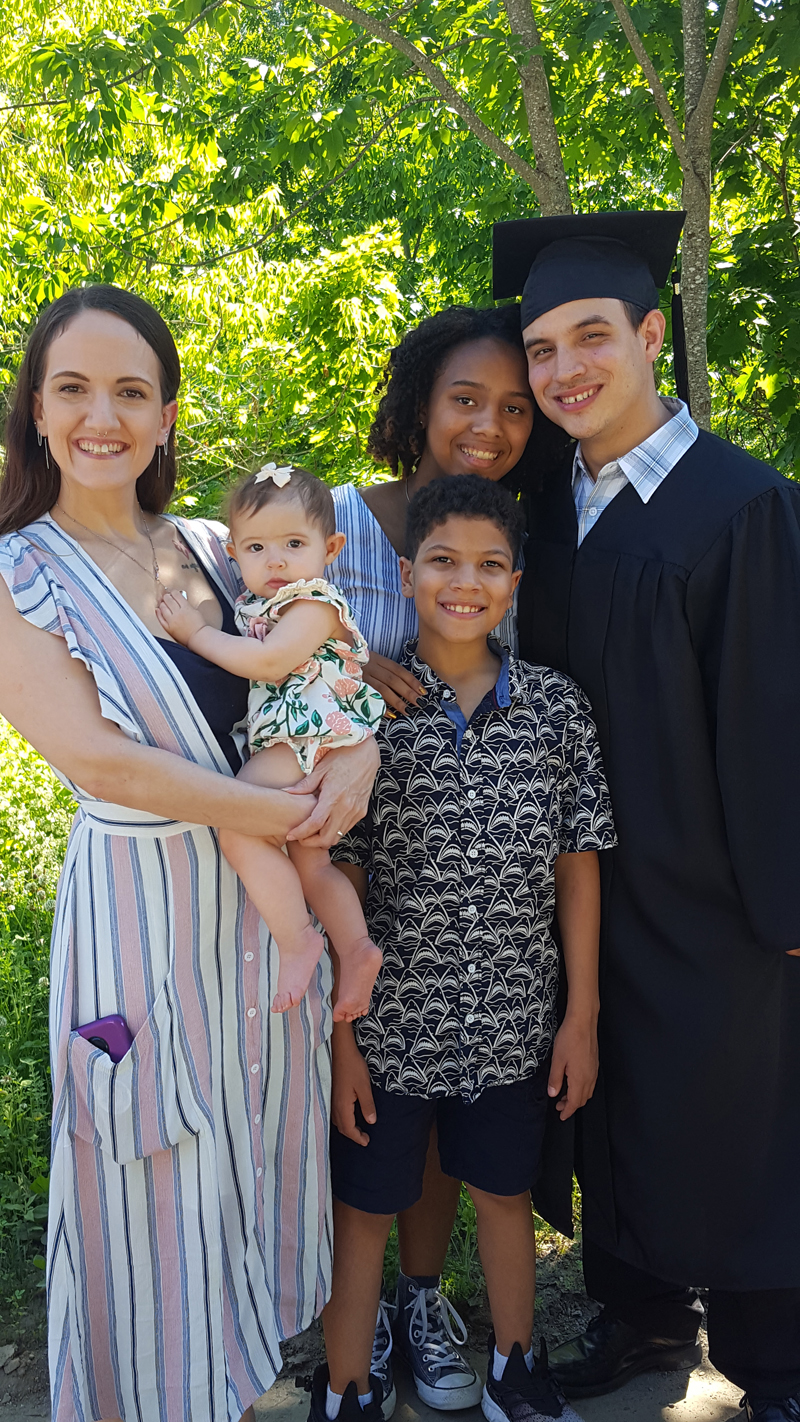 Brandon Rodriguez, the lone graduate from the Central Lincoln County Adult Education program this year, had always aspired to complete high school and further his education, but never had a chance to stop working long enough to make it happen.

Growing up in Dallas, Texas, Rodriguez had to start working at the age of 9 to help support his family after his father left. This didn’t leave much time for schoolwork.

“We just had a hard life growing up. … I would do school, but I would also have to focus on work and bringing up something to have food and pay bills and everything. So I’d go out and mow lawns and clean out attics and whatnot,” Rodriguez said in a phone interview Friday, June 19.

Rodriguez now plans to fulfill his dream of going to school to become an electrician. Despite four years of on-the-job training, he was not able to go to school until he had his high school equivalency.

CLC Adult Education Director Pamela Sperry kicked off the ceremony. She thanked NCS Principal Martin Mackey for allowing the program to have the graduation on school grounds in order to accommodate physical distancing.

Rodriguez, 30, of Edgecomb, walked to the podium to the tune of “Pomp and Circumstance” to receive his high school equivalency diploma amid applause and cheers.

CLC Adult Education offers free classes to prepare students for the HiSET exam. If they pass the exam, they receive a high school equivalency diploma.

The HiSET, which replaced the GED in Maine, can double as a college entrance exam if the student achieves a score of 15 or higher.

In remarks to the crowd, Rodriguez thanked everyone for attending and gave a special shoutout to his family members and his mother, Jane Rodriguez, whom he credited with getting him to where he is today.

“My mom was my mother and my father,” Rodriguez said, as his father left them when he was very young.

Rodriguez’s uncle, Jeffrey Peacourt, thanked the CLC Adult Education staff and spoke to his nephew’s winning attitude, determination, and loving personality, as did the other speakers on the sunny Thursday afternoon.

Sperry then recited original poetry as an ode to the graduate, as she does at each year’s ceremony.

“Brandon worked and worked, and then he worked some more. He inspired every one of us since he first walked through our door,” Sperry rhymed.

“His kindness knows no bounds, he’d do anything for you or for me. I really mean that, he would,” Sperry said. 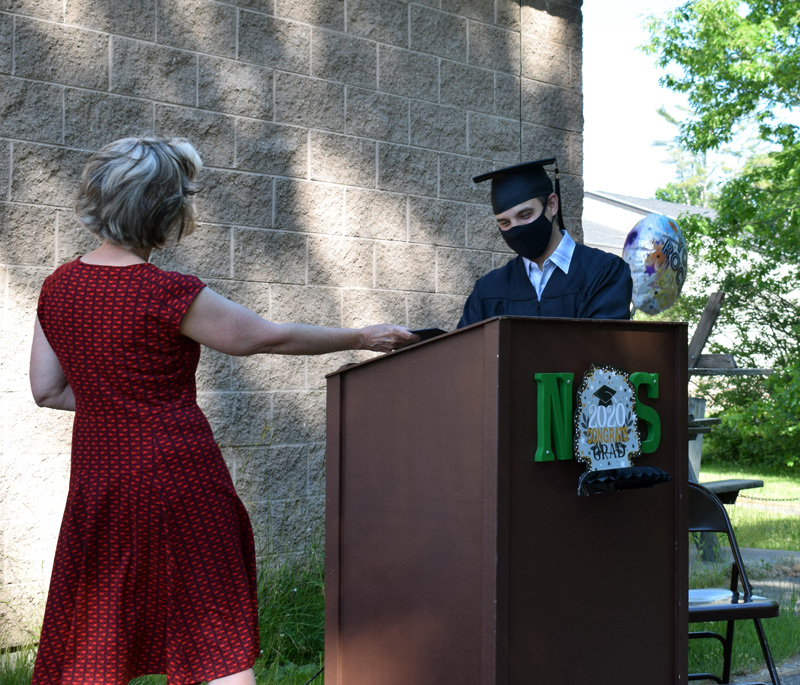 “I started this poem last year, because we thought you were going to graduate last year. But then he had a baby – a beautiful, beautiful baby,” Sperry said to laughter.

Rodriguez, in a phone interview the day after the graduation, said he was on track to graduate but had to step back to support his wife, Kathryn Constantino, after the birth of their first child, Amara.

This was not the first setback for Rodriguez, who said he is the first of his siblings to receive a high school certification. He now hopes to help both of his sisters obtain the same goal.

Since beginning work at the age of 9, Rodriguez has been a maintenance technician for a church, worked in hospice care, and helped to clean and organize senior citizens’ houses when they moved to an assisted-living facility.

Rodriguez eventually got into electrical work in 2016, which he quickly realized was his calling.

“I love everything that has to do with either building, figuring stuff out, and puzzle pieces. And, you know, not leaving until that job is done and making sure you do it right the first time,” Rodriguez said.

In September 2018, Rodriguez moved into a house in Edgecomb with his new bride and two stepchildren to live closer to his wife’s family. Shortly after, he began taking classes at CLC Adult Education.

“Maine is a very, very beautiful, safe place. I can’t think of any place in the world that would be safer and better for my family to grow up in. When we moved here I was skeptical, but now I know that this is home and this is where I want to be,” Rodriguez said. “I want to make sure that what I bring to Maine is what I had in Texas, and I can help everybody here like I used to in Texas.” 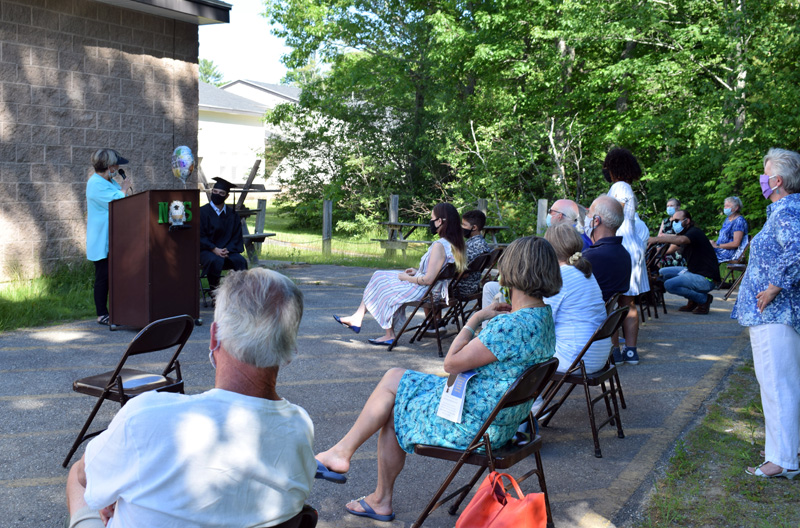 Due to the coronavirus, he is currently unemployed, but is optimistic about finding work as an electrician.

“I know that I’ll be able to find a job very easily. I’m an electrician. I’ve been doing it for a while and I love doing it. I’m a well-rounded electrician,” he said.

Rodriguez thanked CLC Adult Education staff for working with him and opening his mind to a new world of learning.

“They were there every step of the way and they helped me out tremendously, really opened my eyes to different ways to learn and different ways to study. … They gave me the tools, the support, and the determination and encouraged me to keep going,” Rodriguez said.

Ann Hassett, AOS 93 director of curriculum, assessment, and instruction, awarded Rodriguez his diploma and addressed the crowd at the ceremony Thursday.

Then the assembled crowd of friends, family members, and CLC Adult Education staff each read heartfelt tributes to Rodriguez, written on small, heart-shaped pieces of paper, praising his hard work and character.

A toast was made and cake and punch were served after the conclusion of the ceremony.