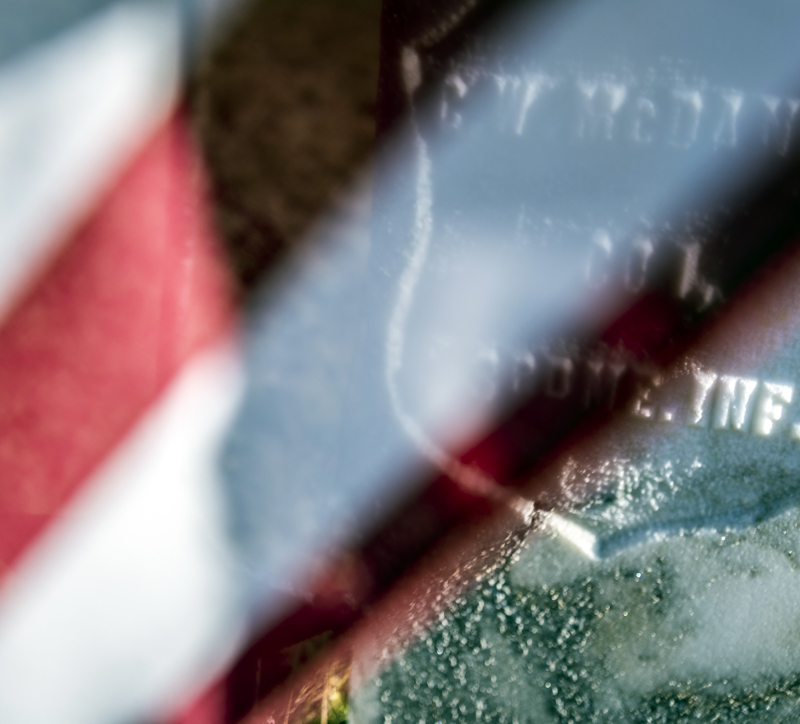 A veteran’s grave stone is seen through the American flag that marks the site at the Sand Hill Cemetery in Somerville on Nov. 8. (Bisi Cameron Yee photo)

Sunlight flares behind a tall lichen-covered monument in the Gilpatrick Cemetery in Somerville, falling across a single small flag planted at its base. A veteran is buried there.

At the Clifford Cemetery red, white, and blue carnations are nestled against another flag that stands to the left of the headstone of Rubert Clifford. Clifford served in World War II and died more than 50 years ago, but the flowers are recent.

In the expansive Sand Hill Cemetery, numerous small flags throughout the grounds catch an occasional breeze. The stars and stripes seem like sentinels, guarding and honoring the graves of men and women who served their country.

Near the road, five flags stand before a clean white marble monument, documenting a family’s history of military service, and near the back a single flag marks a headstone, the name inscribed on its surface lost to time and weather.

There are more than a dozen cemeteries in Somerville and more than 100 veterans’ graves. Each one that has been identified is marked with a flag from Memorial Day through Veterans Day. The flags are purchased each year from the town’s cemetery budget and volunteers place them at the start of summer and gather them near the end of fall. They are a symbol or reverence on the part of the town and its residents to those in the community who served their country.

Gilpatrick, Grotten, Peaslee, French, Crummet, Sturtevant, Marr, Clifford. These are names with long histories in Somerville. There are veterans’ graves dating back to the formation of the town, and before – as far back as the Revolutionary War.

Maine law protects any ancient or public burying ground in which “any Revolutionary soldiers or sailors or soldier or sailor who served in the United States Army, Navy or Marine Corps in any war is buried.”

Somerville sexton John Thompson is dedicated to that precept. As sexton it falls on Thompson to not only ensure regulations involved in the burial process are met, but also to oversee the maintenance of all the town cemeteries.

Thompson is the one who organized the volunteers to place the flags this year, and he is looking for volunteers to help take them down.

Sand Hill Cemetery is well-maintained. The town has a contract with Josh Sevon’s lawn care to manage the grass and with Thomas Stevens Cemetery Restorations of Newcastle to clean the headstones and re-erect them if they have fallen over.

But the smaller cemeteries, Clifford, Simian Fish, and the Gilpatrick Cemetery back in the woods are harder to maintain. Thompson hopes to field a small crew of volunteers to help with raking the leaves, removing wind-strewn branches, pulling up the small saplings invading the grass. He wants a scribe to help him document the information to be found on the skewed and fallen headstones. There are other even smaller cemeteries he has not yet been able to locate since he started in the position.

Thompson, who served for five years as a member of army military intelligence during Operation Enduring Freedom, is fascinated by the history he finds among the cemetery records. There are pages that list all the known veterans’ gravesites, the wars in which they fought.

To him “it is honorable to stand in defense of our community, our nation, our neighbors and our friends.” And respect is a clear driver in the performance of his duties. He brushes leaves away from a buried marker, rights a small headstone as he assesses the maintenance needs of the Clifford and Gilpatrick sites.

Thompson sees those small cemeteries as worth preserving. The gravestones are a record that can be used to trace lineage and to promote understanding of current culture or society through the context of a location or a time.

“There are gaps in our recorded human history where if we had the knowledge recorded there would be a great deal of advances that could be made in lineage tracing. Centuries of information are completely gone forever,” he said.

In Somerville the number of veterans in the town’s cemeteries speaks to the history and the values of the community, about what residents have experienced, about where they come from.

“The evolution of our species depends on understanding our roots. The more we understand about ourselves the better off we are,” Thompson said.

In this capacity of information and understanding, with their lives and their deaths a part of the fabric of their communities, veterans continue to serve.

By straightening headstones, brushing debris from graves, by placing a flag or by reading the names and details of duty etched on granite and marble, we can continue to thank them for that service.