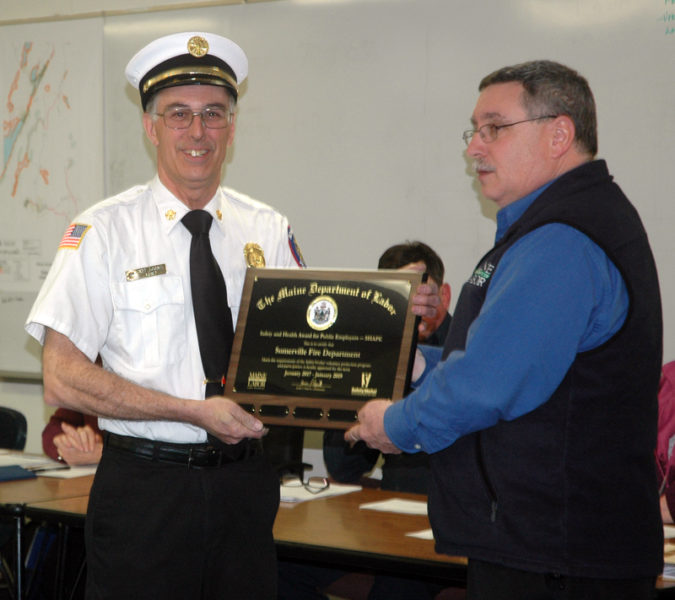 The Maine Department of Labor’s Bureau of Labor Standards presented the Somerville Fire Department with its Safety and Health Award for Public Employers during a meeting of the Somerville Board of Selectmen the evening of Wednesday, March 1.

Fire Chief Mike Dostie and several members of the fire department were in attendance at the town office for the presentation.

The SHAPE award recognizes public-sector employers that are models for workplace health and safety.

Michael LaPlante, of the Bureau of Labor Standards’ Workplace Safety and Health Division, presented the award. LaPlante praised the work of the Somerville Fire Department to qualify for the recognition.

“We are here tonight because the Somerville Fire Department is getting the newest SHAPE award for the state of Maine,” LaPlante said.

Dow and Bradstreet congratulated the department on its efforts and commended the members for their exemplary commitment to health and safety.

According to LaPlante, the state has granted a total of 70 awards to departments since 2005.

“It takes a lot of work to get this award,” LaPlante said.

The selectmen appointed Kelly Payson-Roopchand as grant and project officer and as a member of the comprehensive plan committee.

The selectmen discussed the Lincoln County Regional Planning Commission’s Assistance with Specific Know-how, or ASK grants in an effort to determine whether a town project could qualify for funds.

Selectman Darlene Landry said the town could use grant funds to help pay for streetlights.

“I think that’s the most pressing thing we are looking at right now that would fall under this,” Landry said.

Selectman Susan Greer said an entrance to the basement of the town office is another project to consider.

Greer said the town has held its road plan meeting and a mandatory pre-bid conference would take place at 10 a.m., Tuesday, March 7. Bids for the reconstruction and possible paving of several town roads will be opened at 5 p.m., Wednesday, March 29.

Greer said the town has received two applications for the position of road commissioner. The town is going to extend the application deadline to see if more individuals will step forward.

Greer said the Kennebec County town of Chelsea is also searching for a road commissioner and suggested the possibility of sharing a commissioner with a neighboring community.

“We are going to contact towns around us to see if a part-time road commissioner would be willing to do the work,” Greer said.

“Whoever we hire, I want them to care about our town,” Landry said.

RSU 12 Superintendent Howard Tuttle will attend the board’s April meeting to discuss the district’s budget with the board and residents. The meeting is scheduled for Wednesday, April 5.

Nomination papers for municipal elections will be available Tuesday, March 14.

The town will elect a third selectman and a representative to the RSU 12 Board of Directors this year. Landry and Frank Hample currently hold the seats.