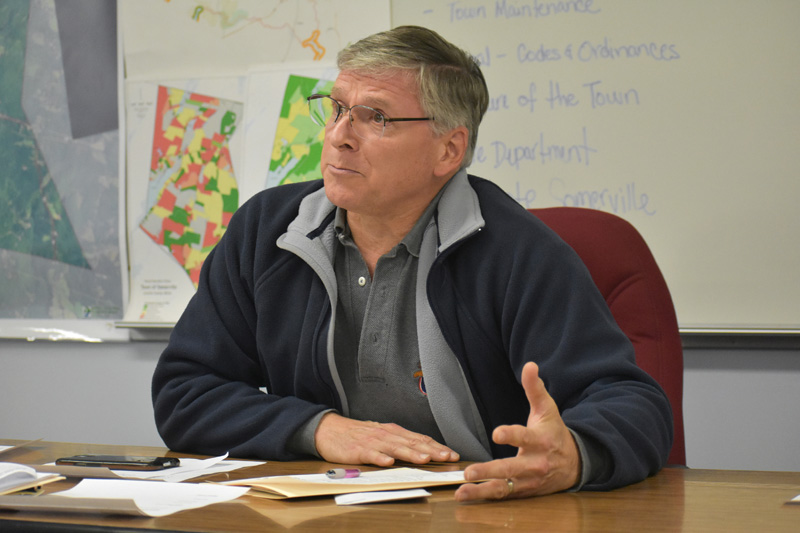 The chair of the Somerville Board of Selectmen abruptly adjourned its Oct. 3 meeting after a resident directed the term “idiot” at one of the selectmen and declined to leave the meeting when asked.

Board Chair and Third Selectman Darlene Landry ended the meeting in the midst of the agenda.

The exchange occurred with resident Dan Barnett during a discussion about town roads and, specifically, problems with the 2017 paving of Somerville Road. It was not clear which selectman Barnett was addressing.

Earlier in the meeting, Somerville Road Commissioner Josh Platt said 17 percent of Somerville Road experienced failure last winter and needed to be reconstructed this year at a cost of $135,000.

According to Platt, the reconstruction work is complete. The sections of road that failed have been ground and reclaimed, with cement poured over the material, leaving all sections of the road ready to be paved.

“First the reclaimed sections will be paved and then (Hagar Enterprises will) do the final layer of paving that was part of the original project by Oct. 30,” Platt said.

At the board’s September meeting, Platt said the original estimate for the work on Somerville Road was $401,000. The figure includes a final layer of paving, which has not yet been added to the road.

Hagar Enterprises Inc., of Damariscotta, is the contractor for the project. Vice President Seth Hagar was in attendance at the meeting.

Hagar said the contractor is working with the town to complete the road’s reconstruction in a fiscally reasonable manner and has met with town officials several times to discuss and resolve the issue with Somerville Road.

Earlier in the meeting, Barnett expressed frustration that the town is paying repair costs in addition to the initial project costs.

In response to Barnett’s initial comments, Johnson said the town’s specifications for the project were not adequate for the condition of the road.

Landry said the situation is not the fault of the selectmen, the road commissioner, the contractor, or another contractor that conducted borings of the road prior to Hagar Enterprises’ work.

Johnson said it is easy to look at the cost and be upset, but added that, had the town ordered more borings, the initial cost of the project would have exceeded the total bid from Hagar Enterprises to account for the conditions of the road.

“It’s not like we’ve been running around tarring roads left and right,” Johnson said.

Multiple members of the public said the issue was in the town rushing through the project.

At the outset of the discussion, Johnson read a request from the road commissioner for the board to approve an overage of the remaining capital roads budget of approximately $36,960.

Accoridng to Johnson, these funds would allow the town to meet its commitment and get capital road improvement projects done. He said the decision would result in less of a surplus for next year, but would not change property taxes this year.

Landry said state law allows the board to move funds in this manner via written approval if the road commissioner asks it to do so.

Platt said the town did not anticipate the additional $135,000 expense for Somerville Road, necessitating his request.

“This gets us some cash flow so this fall we can keep making progress before things freeze up,” Platt said.

During a discussion immediately after adjournment, Johnson suggested an alternative procedure in the event of a future incident of inappropriate or unruly behavior.

Johnson said it would be prudent to call a recess to the meeting and call the Lincoln County Sheriff’s Office.

Landry apologized to the other selectmen and town employees for adjourning the meeting prior to the conclusion of town business.

She said she would remain with the town employees to go over financial information and the adjourned meeting would be rescheduled as soon as possible.

Johnson said the meeting could be continued when the board meets with Hagar to go over a proposed plowing contract prior to the next regularly scheduled board meeting.