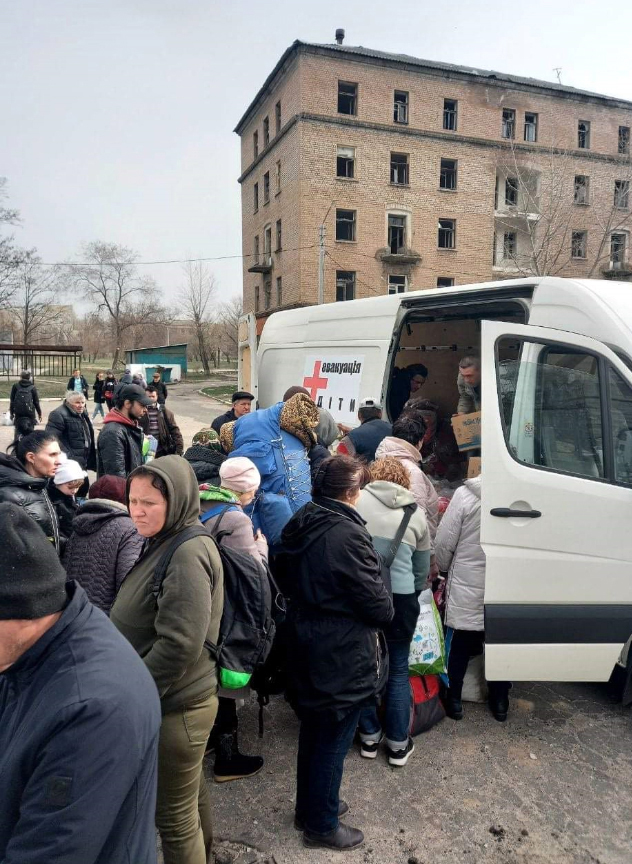 “I did not expect this at all,” said Somerville native Brian Milakovsky over a WhatsApp phone call. He was referring to the tens of thousands of dollars supporters have donated to a fundraising campaign to help Ukrainians.

The campaign started around early March and raised over $120,000 by April 11, according to Milakovsky.

Milakovsky said a realistic goal at this point is $200,000. That would support continued, volunteer-led evacuation efforts, which also supply humanitarian aid in the process.

“Help Me Help Brian,” organized by a friend on GoFundMe has become the central organizing method for Milakovky’s fundraising – but not the exclusive channel.

“We’ve raised it through PayPal, GoFundMe, and a few hand-delivered donations to my father who has helped me do this, from home, from Maine. My folks live in Somerville. That’s where I grew up,” said Milakovsky, who attended Cony High School and the University of Maine.

He gathers donations in a single account before distributing to the volunteers.

“It’s been tricky. It’s hard to get money into Ukraine right now, for various reasons, but not impossible,” he said.

“The volunteers we work most actively with are from a Baptist church in Ukraine, the Good News Church, and they just do this. They did this in 2014-2015, during the Donbas war, and they are doing it now. They’re very well organized,” he said, though the efforts are still in large part grassroots.

Milakovsky said there is a strong sense of trust, after seeing how they worked in relief efforts in 2014-2015. “So they decide how on a daily basis to use this money, and report it back to me,” he said.

“I’m in another country,” he added, “and they are right there.”

They are right there – and these cities are places where people are from, hometowns, Milakovsky said.

“I might just emphasize – because it’s why we’re really trying to pick up the pace – that it’s horrible. I mean, there’s pictures on my Facebook, the Russian siege of these cities is terrible. It’s very similar to what we saw them doing in Syria,” he said.

“It’s just leveling cities with artillery to soften them up so that there’s just no structure left to resist to them … That’s the urgency. They are destroying the place that my wife is from, where I’ve been living. Ukraine is showing them fierce resistance. But the most important thing is just – this is no place for civilians right now,” he added.

Milakovsky was living in eastern Ukraine with his wife, who is Ukrainian, and daughter before the Russian army invaded the region. They fled first to western Ukraine, then to Poland, then eventually to Croatia, where the family is now.

“We moved twice and ended up in Lviv, in western Ukraine, and left the morning that the invasion started, for Poland,” said Milakovsky. “We were very, very warmly accepted there just as millions of Ukrainians are, but we saw what an enormous number of people were coming and decided that since we have more resources that are available … we’d keep moving and crossed a few more state borders and ended up in Croatia.

“These are volunteers with buses, minivans, sometimes just delivery trucks, like with no seats who drive into besieged communities that are literally under fire by Russian artillery. Or our tanks and aviation pick people up and bring them to train stations in safe locations. Or to displaced persons centers where the people can either stay or keep moving.”

Provincial governments are at the helm of evacuation efforts – officially.

“We are supplementing an official process, but doing a lot to supplement it,” he added.

While funding is strong and the volunteer network robust, Milakovsky knows there are still people in need – dire need.

He worries for the towns where shelling by the Russian military has just begun or is predicted to start.

Funds gathered over the next few weeks will go to “really help address the urgency of evacuation from towns that the Russians are … currently violently trying to take over with massive shelling,” said Milakovsky.

The initial horror for many folks witnessing the Russian invasion from afar has passed, said Milakovsky, it has become numbing. So the donations have slowed since the start of their effort. But the need for evacuation has not.

“I think proportionately speaking, Maine is probably better represented than anywhere in this fundraiser,” said Milakovsky, noting lots of donations from the Midcoast, where his father practiced medicine at the Sheepscot Valley Health Center for decades.

His mother worked in philanthropy and Milakovsky in forestry, which brought him to Russia, where he worked in forest ecology for five years before moving to Ukraine.

The community the family has collectively developed – in Maine and beyond – has been key to the fundraising efforts.

Milakovsky said he and his family will stay in Croatia “probably until the tourist season starts here. And it gets really crowded and expensive. And then we’ll see if we can return at that point to Ukraine. And that’s our number one goal is going back to Ukraine, even if just the western part. But if that’s still not possible with security and stability, then I’m not sure – then we’ll make a new decision.”