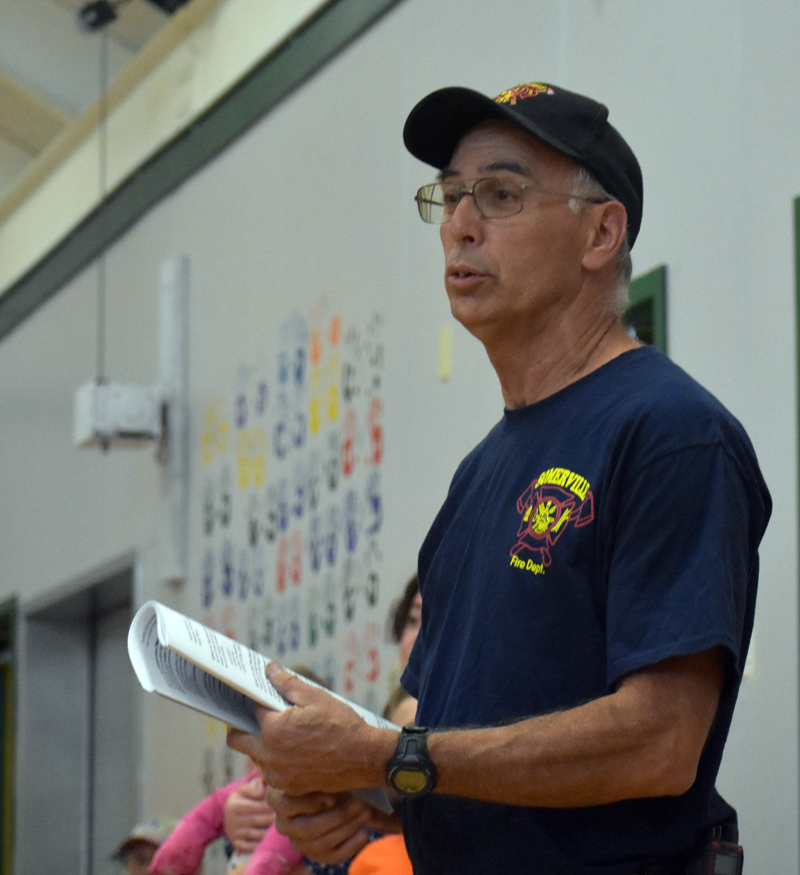 Somerville voters made their voices heard at a four-hour town meeting covering a range of issues, from roadwork to property taxes, on the morning of Saturday, June 23, at the former Somerville School on Patricktown Road.

Weighing in on 30 articles, Somerville voters voted down Article 29, an increase to the property tax levy limit; and amended Article 6, contract services; Article 9, road construction, maintenance, and repair; and Article 27, use of surplus funds for reduction of taxes.

Jeff Frankel, of Windsor, moderated the meeting. More than 100 residents packed into the gymnasium for the proceedings.

According to First Selectman Susan Greer, the municipality can only raise a town’s mil rate by a certain percentage.

In a phone interview after the meeting, Greer said she doesn’t know how the vote will impact the town.

Greer said the town is consulting its assessors’ agent, attorney, and auditor to learn more about the implications of Saturday’s vote.

The attorney is going over the matter with the Maine Municipal Association, according to Greer.

Greer said the town has never had an article of this nature in the past. Surrounding towns, such as Chelsea, Whitefield, and Windsor, vote on a similar article at their town meetings, and Somerville Assessors’ Agent Jim Murphy recommended adding the article to the warrant.

If the town exceeds the limit without voter approval, “the state can make us reduce property taxes, which would throw the budget into disarray,” Johnson said.

“As Chris (Johnson) said, Windsor, Whitefield, and Chelsea have it, and the reason is, if the town’s share of property taxes exceed the legal limit and this is not approved, the budget is invalid,” Frankel said.

“It’s a new article for the town. We found out it is something we are supposed to have on the ballot every year,” Greer said.

Greer said she wishes the board could have provided more clarity to voters at town meeting.

“It is unfortunate we didn’t do enough research to really explain it to voters,” Greer said.

Jim Grenier asked if the town is at risk of exceeding the property tax levy limit.

Greer said it was unclear, but indicated the municipal budget is up roughly 24 percent.

“The state sets the tax levy limit so people don’t find themselves taxed out of their homes. The state of Maine has said municipalities need to figure out a budget which they allow as acceptable,” Throckmorton said.

Contributing to the budget increase is a $110,000 payment on a bond for road reconstruction. Voters approved a bond of up to $800,000 with a 41-28 secret-ballot vote at last year’s town meeting.

The budget also features an increase in the total salaries and stipends of town officials. The category totals $76,652, an increase of $5,605 or 7.89 percent, in an effort to bring the town’s pay in line with that of other area towns.

The inter-governmental transfers portion of the budget, totaling $91,100, saw an increase of $15,000 or 19.71 percent due to the fire department’s request to pay firefighters $15 for each event or training they attend.

Between town meetings, the comprehensive plan committee worked on a plan voters would support, according to committee member Roy Miller.

Miller said work on a new comprehensive plan for Somerville started around five years ago.

Miller said the committee mailed surveys to residents and received a consensus that they wanted to keep the municipality rural in nature while working to attract businesses.

The plan identifies issues such as a lack of three-phase power, weak internet service, and difficulty renting or owning a home in the town.

Miller said a main benefit of adopting a comprehensive plan is its positive impact on the town’s ability to receive grant funding.

Catherine Ladd asked what grants a comprehensive plan would help Somerville with.

Miller said a comprehensive plan would allow the town to pursue grants for the ditching of roads, improved fish access in the town’s waterways, and improvement of internet service.

The amendment covered a discrepancy between the budgeted figure of $100,000 requested for snow and ice removal and the actual cost of the contract with Troy Nelson at a level of $98,000, awarded by the selectmen after the printing of the warrant.

An initial effort to amend the article to $169,000 failed to gain enough support.

Article 6, contract services, was passed at a reduced rate after an amendment to lower the $27,300 recommendation of the selectmen and budget committee to $22,300 was approved by voters.

The amendment was made by Ladd, who said that with increases in other portions of the budget, maybe tax mapping and the revaluation reserve were places cuts could be made.

“We need to try and start cutting back on expenses across the board,” Throckmorton said.

Johnson said that with the next revaluation 10 years off, this could be an area of the budget where cuts could be made.

“It seems this may be a reasonable place to pare down costs,” Johnson said.

Third Selectman Darlene Landry spoke in favor of funding the article at the recommended level. She said the town is losing two staff members, Treasurer Geraldine Kimball, to retirement, and Town Clerk Alissa Yoder, who is moving, and if it wants to attract quality candidates, it needs to offer competitive pay rates.

“We are trying to bring the pay for our town office staff up to where it is for surrounding towns. There is a lot of training involved and these girls get no benefits. Holding the office staff at the current rate does very little. When you work for a company, not getting a minute raise is kind of a slap in the face,” Landry said.

“They are paid $2-$4 below towns in this area that are about the same size as we are … these aren’t minimum-wage jobs, they aren’t entry-level positions. If you want well-qualified people, it behooves you to pay them,” Greer said.

Some suggestions from the public recommended cutting the town office staff to two and paying them higher rates.

“I thought it was going to be an easy job, but boy was I wrong. There was always more than I could do in a day … going to two would be a disaster,” Payson-Roopchand said.

Article 27, use of surplus funds for reduction of taxes, was amended to authorize the expenditure of up to $50,000 from the general fund to reduce taxes. The initial article proposed up to $10,000.