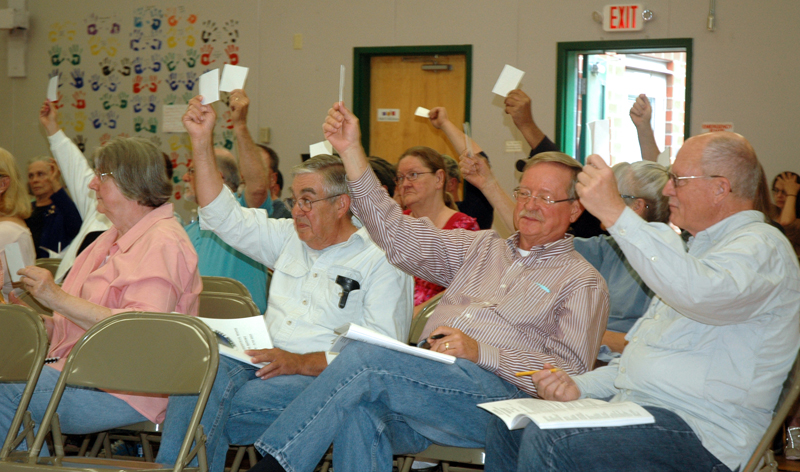 Somerville voters narrowly rejected a new comprehensive plan but approved the other 27 articles on the warrant for the annual town meeting Saturday, June 17.

Residents debated the purpose and necessity of the comprehensive plan, as well as road maintenance and the issuance of a bond for road reconstruction.

The secret-ballot vote against the comprehensive plan was 42-40. During the discussion prior to the vote, residents questioned the process behind the plan’s creation.

Resident Willard Pierpont was one of the voters who raised concerns regarding the new comprehensive plan’s impact on the town’s existing ordinances.

Also in 2012, the town appointed a comprehensive plan committee to develop a new plan.

Greer said the committee interviewed residents, met every other month, and conducted a survey asking residents about their vision for the town.

Greer described the comprehensive plan as a vision statement and assured residents it is not an ordinance, nor would it change any existing ordinances.

“The plan is nothing more than that – a plan,” she said. “There is no change to existing ordinances. It identifies issue areas identified by representatives of the town and recommends strategies. This plan changes nothing in town. It makes recommendations for what we may want to look at in the future.” 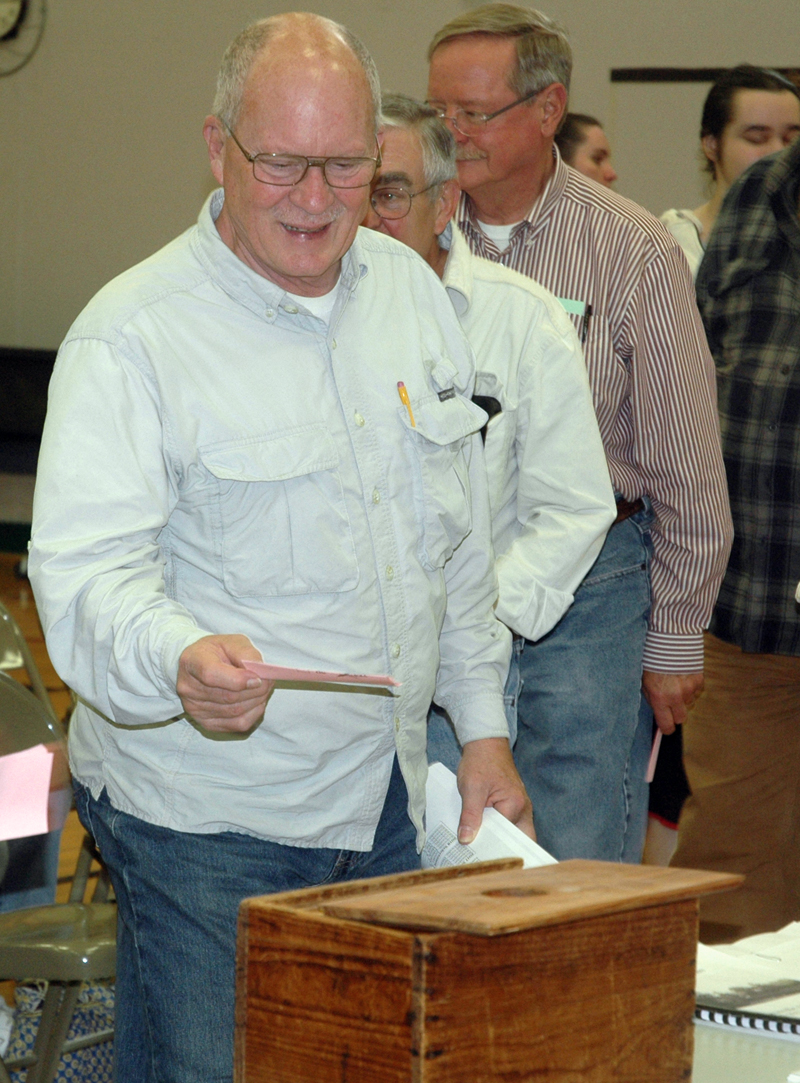 Greer said that in order to change ordinances, the town has to follow a standard procedure of going before its planning board and going through a legal and Maine Municipal Association review before holding a town vote.

Greer said the committee, currently composed of three residents, a number she wants to see increase, held four public hearings prior to town meeting in an effort to compile and address public input before the June vote.

According to town meeting Moderator Chris Johnson, a former state senator, the state encourages towns to update their comprehensive plans every 10 years. The plans make towns eligible for a number of state grant opportunities.

“The plan is a recommendation. It’s a road map,” Johnson said.

After the vote, Greer urged those concerned to take an active part in the process as the comprehensive plan committee resumes work on a document for a future vote.

“No one in town has all the information. It takes everyone, a collaborative effort, to make sure it is as correct as it can be,” Greer said.

“Those who have concerns need to get involved in the process,” Johnson said.

“They need to follow through and do their part so we don’t have to go through this again,” Landry said.

An offshoot of the debate over the adoption of the comprehensive plan was discussion on how the town could best notify residents of meetings and opportunities for public participation in municipal government, leading the selectmen to encourage residents to leave names and email addresses with the town clerk.

Greer said the comprehensive plan committee will schedule a meeting and announce it to the public.

The Somerville Addressing Ordinance passed 49-23 in another secret-ballot vote.

Greer said many residences in Somerville do not have address numbers visible from the street or have mailboxes on the opposite side of the street, which creates confusion during emergency responses.

Two other articles drawing a flurry of public comment were the appropriation of $200,250 for road construction, maintenance, and repair, and the issuance of a bond of up to $800,000 for the purpose of road reconstruction.

Greer said road reconstruction is a pressing issue for Somerville. She said all the town’s roads need to be rebuilt, with the exception of Valley Road and the lower portion of Sand Hill Road.

The town recently hired a new road commissioner with expertise in gravel roads, Josh Platt, the founder of Maine Environmental Solutions in Hallowell, at a rate of $1,000 per month. Platt will start work Saturday, July 1. The plan is to have him attend the monthly selectmen’s meetings.

“When it comes to something that costs as much as our roads, we need someone of the highest caliber,” Landry said. 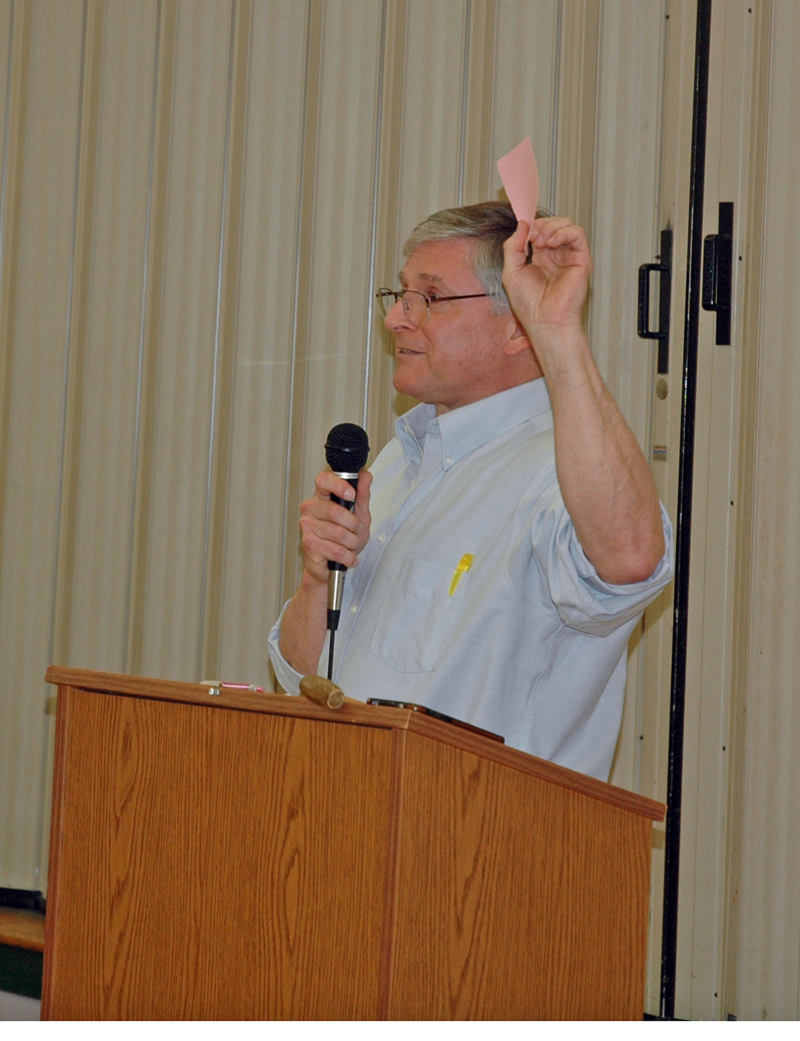 “The intent is to borrow as little as we have to. We all pay taxes. We don’t want to see taxes increase either,” Greer said.

“We are trying to do this so it’s the most cost-effective way for the town to get good roads. By doing the whole reconstruction, rather than in parts, it will give us a road and all we have to do is maintain it,” Greer said.

Frank Hample, a resident and former selectman, asked about inquiring into a bond from the Maine Municipal Bond Bank and getting Maine Department of Environmental Protection approval for upcoming work on South Colby Road.

“I think the intent of most everybody who lives here is to keep Somerville a rural community, and if you have well-built gravel roads, in very few instances is it preferable to pave,” Greer said.

Outgoing Road Commissioner Jesse Turner questioned the life expectancy of rebuilt roads, asking if in 10 years, when the bond is paid off, more money would need to be borrowed to maintain the gravel roads.

Greer said maintenance funds would come out of existing capital reserve accounts, not from a bond.

“We’ll build the reserve up so by then we will have the funds,” Greer said.

Residents voted 41-28 via secret ballot in support of the issuance of a bond of up to $800,000 for road reconstruction.

At the conclusion of town meeting, town Treasurer Gerry Kimball made a motion to group articles 16-28 together and vote on them as one item. Kimball said the articles appear on the warrant every year.

The articles included the appropriation of $20,000 in contingency funds and the expenditure of $10,000 from surplus to reduce taxes.

The vote on the warrant’s final 12 articles carried without opposition in a hand tally.