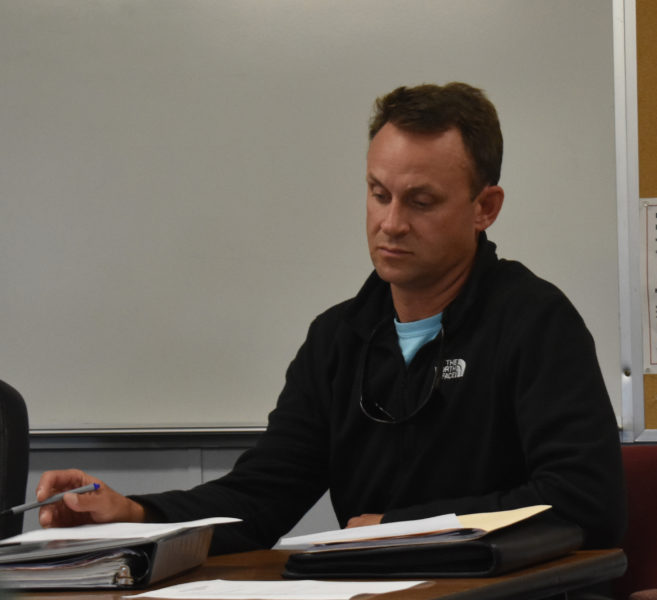 Somerville Road Commissioner Josh Platt explains the reasons for his resignation during a special meeting of the Somerville Board of Selectmen on Sept. 18. (Alexander Violo photo)

Somerville Road Commissioner Josh Platt intends to resign, citing hostility from residents. The Somerville Board of Selectmen did not accept his resignation, however, instead voting to hire a replacement before releasing him from his contract.

Platt, in his letter of resignation, gave the end of September as the effective date. During a special selectmen’s meeting Sept. 18, he agreed to stay on until the end of October.

After much discussion and public comment, the selectmen voted unanimously to find the commissioner’s replacement before releasing Platt from his contract. Platt’s three-year term expires in June 2020.

Platt said he has developed a thick skin during his career, but harassment from residents has grown to present an undue risk to his livelihood and professional reputation.

In addition to his role as part-time road commissioner, Platt works at Maine Environmental Solutions in Hallowell. He founded the company, which provides gravel road design and management planning, environmental assessments, and erosion control planning.

As road commissioner, he earns a monthly stipend of $1,000.

“I understand the way I am treated is part of a job. People certainly have a right to question things, but the way it is presented sometimes … I’ll leave it that,” Platt said.

Platt’s treatment by residents “is more than a lot of people in this room know about,” he said. “I don’t see how anyone can argue the roads aren’t better than when I started.”

Platt said he addresses all questions he receives, even those in long emails and even questions he has answered multiple times at public meetings.

“Never have I ever not responded to people. I answer every question I get if it is legitimate,” Platt said.

Somerville voters decided to change the method of selecting a road commissioner from election to appointment by a margin of 34-10 at town meeting in 2016.

Platt wrote a 2016 management plan for the town’s gravel roads prior to taking over as road commissioner.

He worked for 10 years as a project manager and member of the watershed project field staff for the Kennebec County Soil and Water Conservation District. He teaches courses on gravel roads for the Maine Department of Transportation.

Before the selectmen’s vote Sept. 18, Doug Shartzer urged them to hear out the townspeople.

“It is important the people in this room are heard before the selectmen render a decision to release (Platt) from his contract,” Shartzer said.

“I want everyone to know people have the right to question any decision the road commissioner or board of selectmen make,” Greeley said.

Johnson said the manner in which questions are asked is important.

“How people express themselves does matter. We have decorum and expectations that we don’t attack people. It is what you have a problem with that is the issue, not getting into motives and intentions and speculating on that,” Johnson said.

The special meeting had been opened by resident Russell Gates, who implored residents to stop barking at the board and one another and work together to resolve the matter at hand.

“It’s sad the townspeople have made bad comments. He is doing the best job he can do for this town and he is the first road commissioner ever to come to us with a bill in hand to let us know how much it costs to do a job,” Chase said.

Chase took exception to remarks at past meetings about the choice of road materials.

“Traffic conditions are very different than 35 years ago. The weather is very different than 35 years ago and no one takes that into consideration. We used to have five people on these roads a day; now we have 30. That makes a difference in conditions and what type of materials you use … but there are some people in town, no matter what you do or show them, they don’t change their minds,” Chase said. 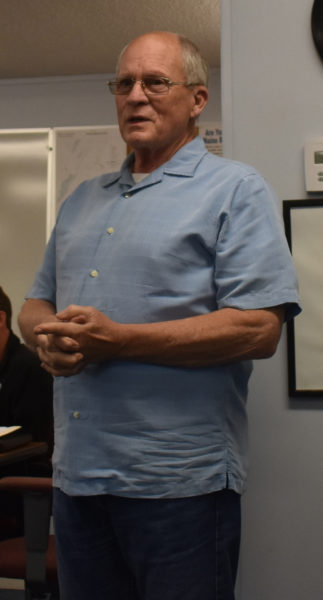 Somerville resident Russell Gates calls for civility during a Sept. 18 meeting about the resignation of the town’s road commissioner. (Alexander Violo photo)

Somerville Road was at the center of the discussion on the road commissioner’s resignation.

The selectmen were adamant that even if they accept Platt’s resignation, he would need to stay on, potentially as a subcontractor, until the problems with Somerville Road’s paving are resolved.

According to Platt, 17% percent of the fall 2017 paving on Somerville Road failed after three preconstruction borings by the town did not accurately show the composition of the road’s base. The road began to show issues in the winter and spring after the initial work.

Ultimately, 18 borings were done, revealing the full nature of the ground beneath the roadway.

Resident Frank Hample asked who recommended the three borings prior to paving.

At the time the borings were done, “the town hadn’t decided to pave the road,” Platt said. “They just said, ‘Let’s do three borings per road. That’s what we have money to do.’”

Because of the boring-related issue, the paving contractor, Hagar Enterprises Inc., of Damariscotta, was not deemed at fault for the initial issues with the road.

An analysis of the 18 post-construction borings by E.S. Coffin Engineering & Surveying Inc., of Chelsea, showed the issue lied with the roadbed.

“Hagar wasn’t contracted to rebuild the road, based on the limited core samples that were done which didn’t show these issues. Rebuilding the road was not part of the contract, therefore, through a legal assessment, they weren’t liable, because they didn’t reconstruct the road,” Johnson said.

Complications from the project have led to acrimony at selectmen’s meetings, with resident Dan Barnett directing the term “idiot” at the board in October 2018, leading then-Chair Darlene Landry to abruptly adjourn the meeting.

Responding to comments, Platt said the temperature at the time of paving was not the issue. He said he posed the question to two engineers from the Maine Department of Transportation.

“They said if that was the case, the failure would have been over the whole surface area, not 17% of the road,” Platt said.

The road was rebuilt in 2018 at a cost of $135,000, a cost separate from the original estimate of $401,000 to pave the road. A final figure for the original construction cost was not available.

The $401,000 estimate included a final layer of paving, and new issues have come up with this final layer.

According to Johnson, the final layer is not adhering to the other portions of the road, causing issues with the pavement overall.

Johnson said he believes the issues with the final layer fall under the contractor’s warranty. He is optimistic the town will reach a resolution on the matter with the contractor in the near future.

Johnson said that because of the ongoing nature of the issue, it is paramount Platt does not resign immediately. The town needs his “help and support” for “however long it takes,” Johnson said.

The town has received two emails from Hagar Enterprises updating Somerville on its progress, indicating it is analyzing materials in the top layer to see what went wrong, according to Johnson.

Platt said he would work with the town and Hagar Enterprises to resolve the problems on Somerville Road.

“I worked with Hagar on the base issue, on the plowing contract, and I have had no issue communicating with them. The reasons I have for resigning have nothing to do with Hagar,” Platt said.

A petition is circulating in Somerville to go back to electing a road commissioner. Claudia Fujinaga, of Crummett Mountain Road, started the petition, which Johnson believes to have enough signatures to force a vote.

The petition may complicate the selectmen’s efforts to fill the position.

After the selectmen voted on Platt’s resignation, they revised the job description for the position and worked on an advertisement for the opening.

Johnson said it will be difficult to hire a qualified candidate for a job that will only last several months if voters opt to elect the road commissioner.