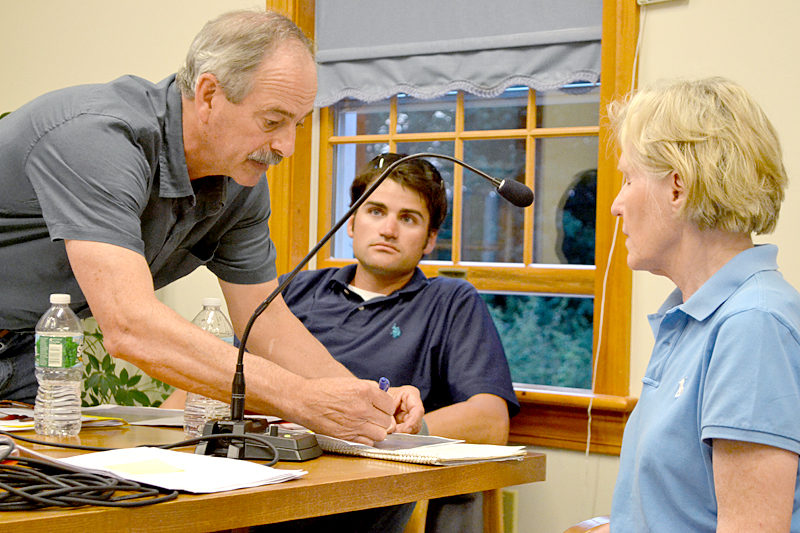 Mook Sea Farms Inc.’s application for a 10-year, 3.66-acre aquaculture lease in the Damariscotta River in South Bristol drew concerns about navigation and property access from neighbors during hearings on Wednesday, July 13 and Monday, July 18 at the South Bristol town office.

Bill Mook, owner of the Walpole-based business, submitted the application for the lease, which would consist of four tracts northwest and east of Peter’s Island in the Long Cove area of the Damariscotta River. In 2013 and 2014, Mook was granted experimental leases at the site totaling 1.46 acres.

During the hearing, Mook said the lease site would be used to store market-sized oysters over the winter, which would be sold from January to early April. Approximately 1,559 cages would hold an estimated 1,870,000 oysters at maximum capacity.

Market-ready oysters would be transferred to the site in late October or November, and all gear would be removed by the end of April. From January through March, employees would visit the site to remove oysters from the cages to be packed and shipped.

Jeff Auger, the farm manager for Mook Sea Farms, said the operations on the water would last approximately an hour each day barring any unforeseen circumstances, including inclement weather. In the event the crews have to break ice in order to get to the site, it might take a bit longer.

“The goal of harvesting in the winter is to spend as little time on the water as possible,” Auger said. “It is very cold, we are often wet, and it is a pretty dangerous situation because there are no other vessels or people present on the water.”

Maine Department of Marine Resources Aquaculture Environmental Coordinator Jon Lewis conducted an assessment of the proposed site in April. During the hearing, Lewis said he had no concerns about the impact of the proposed lease on the ecology of the area.

Concerns regarding the ability of property owners to access their property, the ability of watercraft to navigate the cove when gear is on site, and wildlife in the area were expressed during the two hearings.

South Bristol Harbor Master Cecil Burnham said he believes the size of the proposed lease is too dense for the cove. The new lease would more than double the area of the experimental leases.

Thomas and Susan Lamia have owned property overlooking Long Cove since 1976 and are building a year-round house. Both said the lease would limit activities they have done for years in the cove, such as swimming, rowing, and kayaking. In addition, the Lamias said the aquaculture site would make it difficult for the family to access Peter’s Island, which their children own.

The Lamias also have two moorings within the boundary of one of the tracts. Mook proposed accommodations to allow the Lamias to continue using their moorings, including not putting cages in the tract until November.

The Lamias also requested a requirement that all gear be removed from the lease site by April 1 if the lease is granted. Both Mook and Auger said such a condition would likely not be able to be met, due to the unpredictability of weather and the time it would take to move the cages to Mook Sea Farms’ other lease sites.

Nick Lamia, one of the Lamias’ children who own Peter’s Island, spoke at the hearing. Nick Lamia, an artist, is working on a series of paintings of Peter’s Island, and would like to maintain year-round access to various points on the island.

Thomas, Susan, and Nick Lamia requested that the tract between the Lamia dock and Peter’s Island be eliminated in an effort to retain reasonable, direct access to the island.

Sigrid Sproul, who owns a rental cottage on the mainland, said the lease would inhibit her from potentially placing a dock and float on her property. Sproul asked that the tract closest to her property be shortened and narrowed to allow for sufficient use of the property.

Following the five-hour hearing on Wednesday, Mook submitted a list of conditions that could be placed on the lease to address the concerns of the Lamias and Sproul, including shifting one of the tract’s boundaries, maintaining a 100-foot channel between cage strings to allow barges and boats to access the cove for dock work after April 1, and ensuring no gear would be within 55 feet of the Lamias’ docks.

Both the applicants and any abutters have until July 29 to submit a written closing argument to the DMR, which will decide whether to grant the lease.

DMR Aquaculture Hearings Officer Diantha Robinson said decisions about lease applications are typically made within 120 days of the hearing; however, the date could be extended if necessary.

This is the second aquaculture lease hearing in South Bristol in recent months to draw complaints from landowners. In December, David Cheney, owner of Johns River Shellfish, submitted an application for a 10-year, 2.65-acre lease in the Johns River west of Peabow Island.

Cheney was granted the requested lease with conditions on May 18, according to the DMR website.