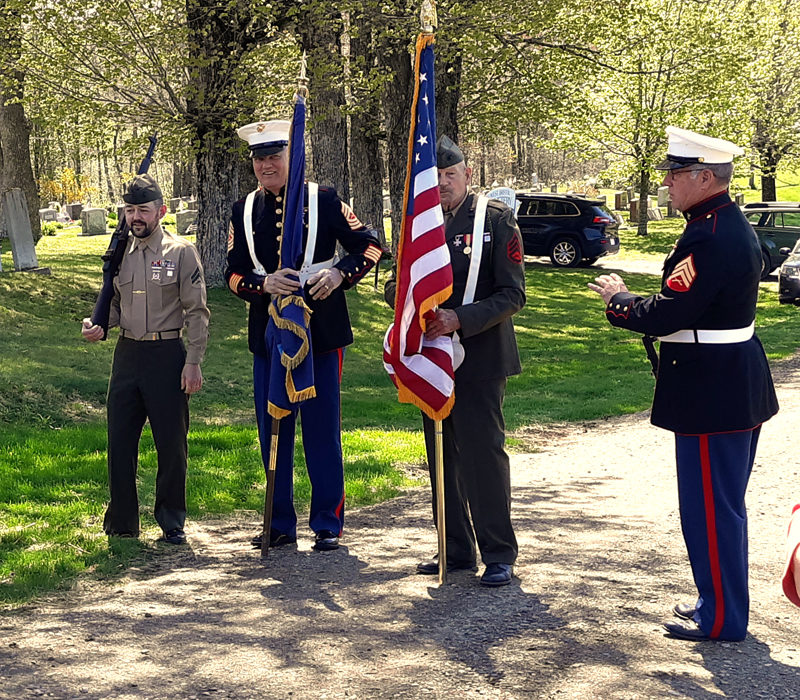 On the day before Memorial Day, a beautiful, sunlit Sunday morning at the West Bristol Cemetery in Walpole, a large crowd gathered to honor South Bristol veterans at the dedication of the town’s new memorial.

Chester Rice, chair of the South Bristol Board of Selectmen, led the dedication. He gave thanks to the veterans for their service and to everyone involved with the project, including local volunteers and the South Bristol Historical Society.

Rice said the town owes special gratitude to the late Ann Stratton, benefactor of the town, whose generosity enabled the undertaking.

Rice introduced the Rev. Elizabeth Hood, pastor at the Union Church of South Bristol, who delivered a moving blessing.

The three massive, artfully carved granite monuments gleamed in the sunshine. They were quarried and manufactured in Barre, Vt. by Buttura & Gherardi Granite Artisans.

The center monument measures 6 feet wide by 7 feet tall and bears the names of World War II veterans. The names are engraved in four columns, along with stars and filigree.

The two “wing” monuments are 5 feet by 6 feet, with the names of other conflicts above the respective lists of veterans’ names.

One of the veterans present at Sunday’s dedication was 96-year-old U.S. Navy veteran William Rice, whose name is on the center monument. Rice had also been listed on South Bristol’s original World War II roll of honor in 1944.

The effort to design and erect the granite memorial really began in 2015 when Scott Farrin started his research on the original roll of honor. A trustee of the South Bristol Historical Society, he later approached the society and the selectmen with the idea of replacing the roll of honor, which had been dedicated in 1944 and had stood in front of what is now the society’s museum (the original Rutherford Library).

That memorial had fallen into disrepair and been removed many years ago. Scott Farrin’s father, Albert D. Farrin Jr., who served in the U.S. Navy during World War II, had been listed on the roll of honor.

The selectmen approved Scott Farrin’s suggestion for a new memorial with the condition that it include the names of South Bristol veterans of all wars. Voters approved the building of the new memorial at town meeting in March 2018.

The monuments were erected by Thomas A. Stevens Memorials, of Newcastle, on April 11. That morning, the granite truck arrived just after 7 a.m. and the crane from Thomaston shortly after that. The crane and the truck left about 2 p.m. and the setter finished sealing the joints about 5 p.m.

South Bristol Historical Society Trustee Carol Kelsey, along with other society members, was involved in the two to three years of research and name-gathering necessary for the project.

Kelsey said there were submission sheets and notebooks explaining the project and showing the growing list of names at the town hall, library, post offices, and historical society, where folks were encouraged to add names and make corrections.

The complete list of veterans in the book compiled by the historical society can be viewed at the museum on Route 129, just south of the bridge onto the island, and also at the library and town office. The lists will continue to be updated.