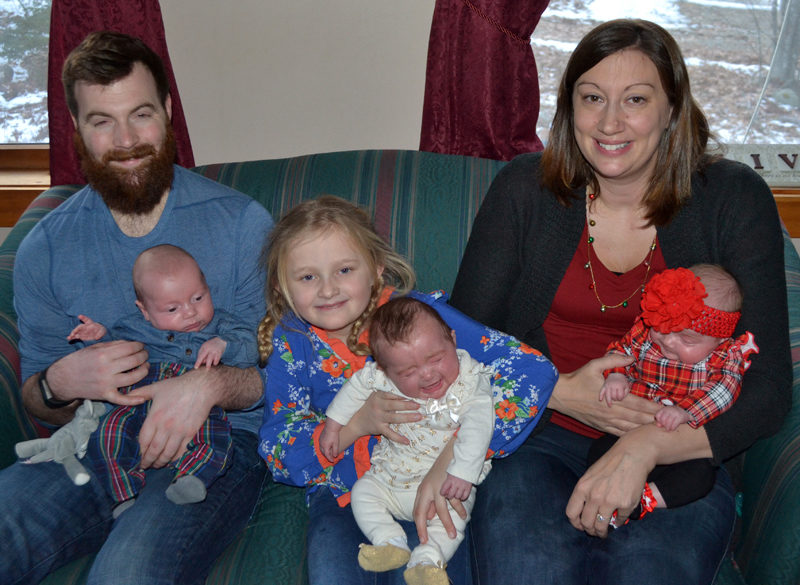 For her last three birthdays, 8-year-old Avalee Brightman-Uhl has asked for a baby brother or sister as a gift. Her wishes came true earlier this year, when her mother, Amanda Sykes, gave birth to a set of triplets.

Sykes and Merrill first found out they were having triplets during an ultrasound six weeks into the pregnancy. 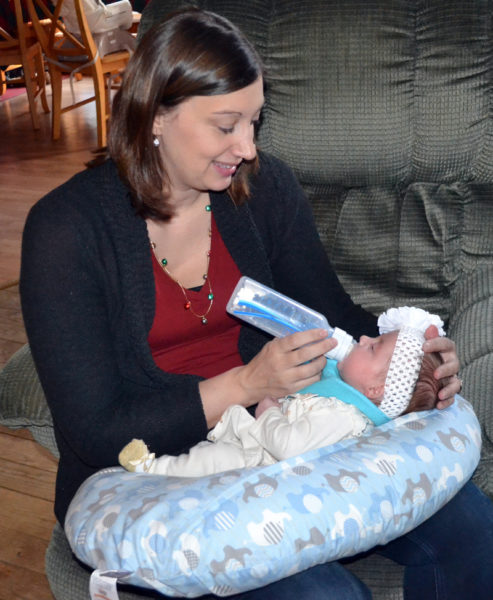 “Before we went in, I was trying to prep him because this was his first child,” Sykes said. “I told him that it was still early and we might not be able to see anything or hear the heartbeat yet.”

“I was trying to reassure him and also myself,” Sykes said.

Prior to the ultrasound, a friend had joked that the couple was going to have twins. When the ultrasound technician revealed there was not one, but two heartbeats, Sykes said she owed the friend $20 for guessing correctly.

There are no triplets on either Sykes or Merrill’s sides of the family going back three generations.

Sykes and Merrill kept the news to themselves until a family barbecue in the summer when Sykes was about 13 weeks pregnant.

“I think they kind of suspected we may be pregnant, but no one ever thinks triplets,” Sykes said.

The couple presented their mothers with T-shirts to reveal that they were expecting. After the initial excitement, Sykes and Merrill presented the soon-to-be grandmothers with framed ultrasound images with each of the three babies labeled.

“At first they were like ‘Oh, the ultrasound!’ and then it clicked,” Sykes said. “Everyone was just so excited and started screaming.”

When Sykes was 25 weeks pregnant, the family moved from Bath to South Bristol, Sykes’ hometown, for a larger home. About a month and a half after the move, Sykes started to exhibit signs of preeclampsia, a condition characterized by high blood pressure that can lead to serious complications. Sykes made weekly and then daily trips to Portland for sonograms and bloodwork.

During her 32nd week of pregnancy, Sykes was a bridesmaid in a cousin’s wedding. She returned to Portland the next day and delivered the children via emergency C-section.

The weight of each triplet was healthy, considering they were born almost two months before their Nov. 11 due date, Sykes said.

Chloe, Camden, and Ainsley spent six weeks in the NICU gaining weight and learning to eat on their own. There were no complications after birth, Sykes said. 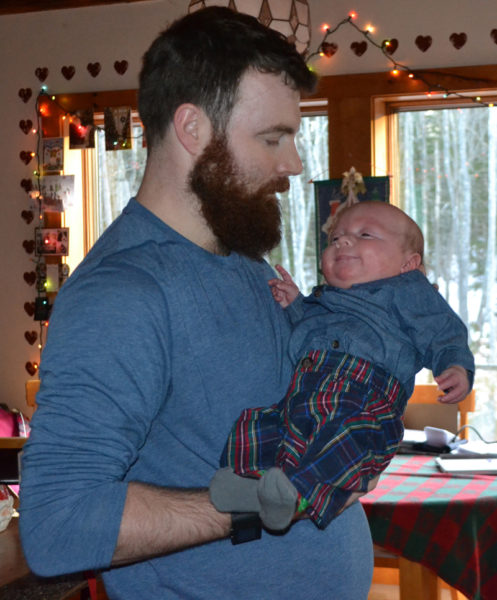 While the babies were in the NICU, Sykes and Merrill would drop Avalee off at South Bristol School, drive to Portland to spend time with the triplets, and return to South Bristol to pick Avalee up from school. The routine allowed Sykes to heal and get full nights of sleep, so when the triplets came home, she was well rested.

Sykes and Merrill have maintained the routines the triplets learned when they were in the NICU. Every three hours, the babies are changed and fed. They go to sleep around 9 p.m. and wake up around 4-5 a.m.

“We’ve been pretty lucky that they’re all on the same sleeping schedule right now,” Sykes said.

Although the couple does have some matching outfits for the triplets, including Christmas pajamas, they tend to steer away from dressing the babies alike, Sykes said.

“I think they’re going to have their own identities and personalities as they grow up,” Sykes said.

Because the babies are fraternal triplets, both their parents and Avalee can tell them apart, Sykes said.

The couple has received an enormous amount of support from friends and family members, Sykes said. One friend even moved into the house for two weeks after the babies came home to help out when needed, while another developed a schedule for people to bring the family food.

Both Sykes and Merrill were able to take time off from work when the babies were born. Sykes is a special education teacher at South Bristol School and will return to work Jan. 3, after the school’s winter break. Merrill worked in Lewiston as a forklift operator, but plans to be a stay-at-home father. 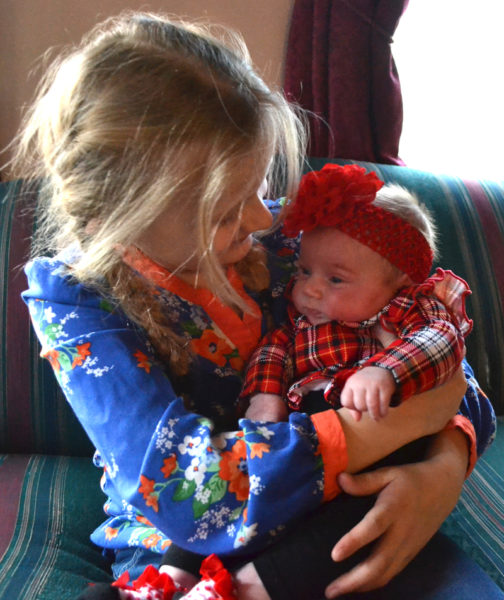 “It’s been stressful, but fun,” Merrill said. “It has its ups and downs, but all in all it’s pretty great.”

Avalee has taken her new role as the triplets’ big sister very seriously.

“It’s busy, but I always have loved babies. With my baby cousin, I would have to wait forever to hold them. But now, since I’m a big sister, I can pick them up when I want,” Avalee said. “I like spending time with them and being able to snuggle them.”

Avalee also reads to the babies and said she wants to teach them math when they get older.

Sykes said she’s looking forward to seeing the relationship between the triplets develop as they grow up.

“Once they get a little older and begin to interact with each other, I think it’s just going to be really cool to see,” Sykes said. “I really hope they develop a special bond, and have best friends for life.”

Chloe shares her middle name with Sykes’ mother, Amy Sykes. Shortly after the couple announced they were pregnant with triplets, Amy Sykes was diagnosed with breast cancer.

Amy Sykes underwent a successful lumpectomy to remove the cancer and received chemotherapy and radiation treatments. Her last chemotherapy treatment was Tuesday, Dec. 20.

“It’s the triplets’ first Christmas and Mom’s final chemo, so this is definitely a Christmas to remember,” Sykes said. 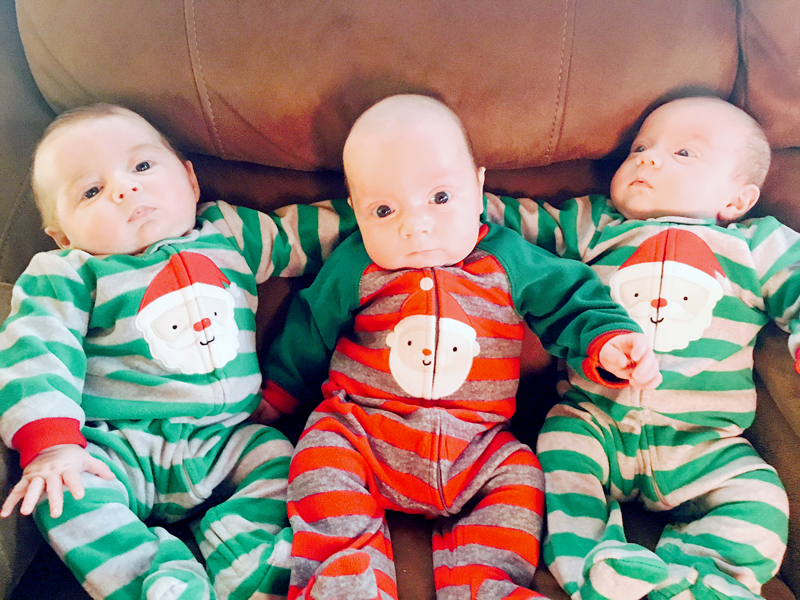