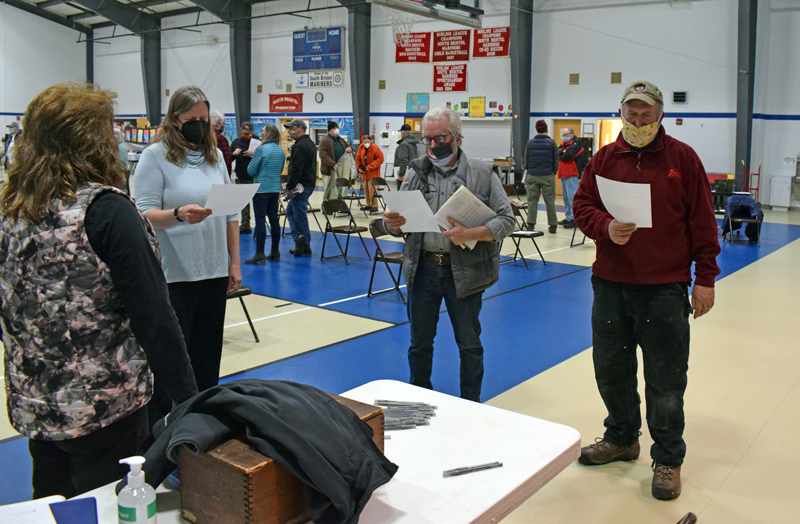 About 35 South Bristol voters approved the town’s education and municipal budgets, accepted a land donation, and OK’d changes to the shoreland zoning ordinance at annual town meeting on Tuesday, March 9.

The town meeting wasn’t much different from last year’s, which was held just days before the coronavirus upended life in Lincoln County. This year, everyone wore a face covering, kept their distance, and submitted written ballots for the education budget one at a time. Other than that, town business hummed along as usual.

The shoreland zoning ordinance changes mostly involved updating the formatting  and substance of the ordinance to align with state guidelines.

John Harris, a member of the planning board, said a section covering timber harvesting has been repealed and the new section is meant to deal with storm damage and removal of dead or hazardous trees.

A fact sheet on the ordinance changes distributed at the meeting says the Bureau of Forestry will “administer the regulation of all forestry activities within the municipality.”

The Bureau of Forestry is a division of the Maine Department of Agriculture, Conservation and Forestry.

Resident Cecil Burnham spoke against the changes, saying they are too restrictive and he would rather keep the ordinance the way it is.

Voters also accepted a donation of a 0.7-acre parcel of land at Map 12, Lot 24 in the name of Virginia A. Corton, John R. Nichols, and David H. Nichols for use to benefit the town.

Ken Lincoln, chair of the board of selectmen, said the strip of land is near the head of House Cove on Rutherford Island and the donors wanted to keep the land open and wild.

“Our thought is people could use it if they wanted to picnic down there or put a kayak in. Just light public use. It won’t be developed,” Lincoln said. He said any public access to the water is welcome. 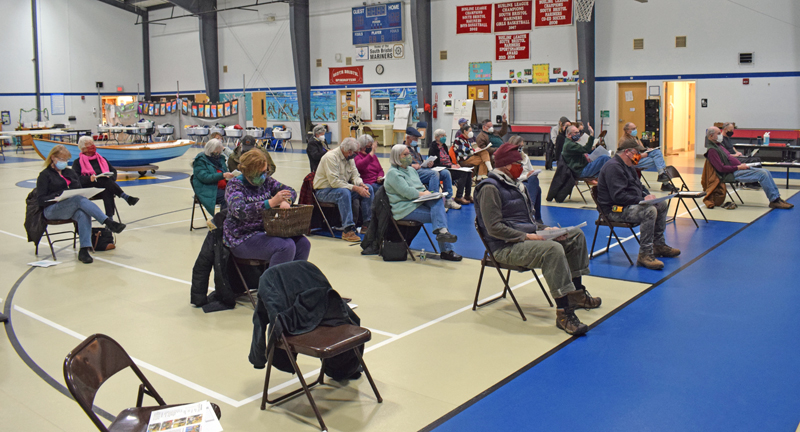 About 35 South Bristol residents attend annual town meeting in the South Bristol School gym on Tuesday, March 9. The meeting was fairly typical, despite the addition of masks and physical distancing. (Evan Houk photo)

Selectman Chester Rice said the town’s Stratton funds now have a balance of about $14 million. The funds are the result of a bequest from Ann Wilder Stratton.

Factors in the overall increase of the municipal budget include a $37,461 hike for snowplowing, a $3,083.59 rise in the town’s contribution to the Central Lincoln County Ambulance Service, and a $2,500 increase in the fire department’s budget.

During a short break, SBS students raffled off a wooden skiff built by the previous year’s eighth grade class. Sarah Jordan, who has three kids enrolled at the school, won the boat.

The town’s contribution to Central Lincoln County Adult Education increased by $1,642 to $5,000.

CLC Adult Education Director Pamela Sperry spoke to the program’s extreme financial difficulty over the past year due to the coronavirus and thanked the selectmen and the budget committee for raising the town’s contribution.

“South Bristol is the only town, so far, that has gone above and beyond and given us more than we asked for,” Sperry said.

The crowd applauded Sperry after she spoke, showing support for the CLC Adult Education program.

During the election portion of annual town meeting on Monday, March 8, voters reelected Lincoln to the board of selectmen and Sara Mitchell to the school committee. They also elected one new member of the school committee, James Ready. Each candidate was unopposed.

The officials were sworn in after town meeting.

During the open portion of town meeting, on Tuesday, Betsy Graves was reelected to the budget committee.