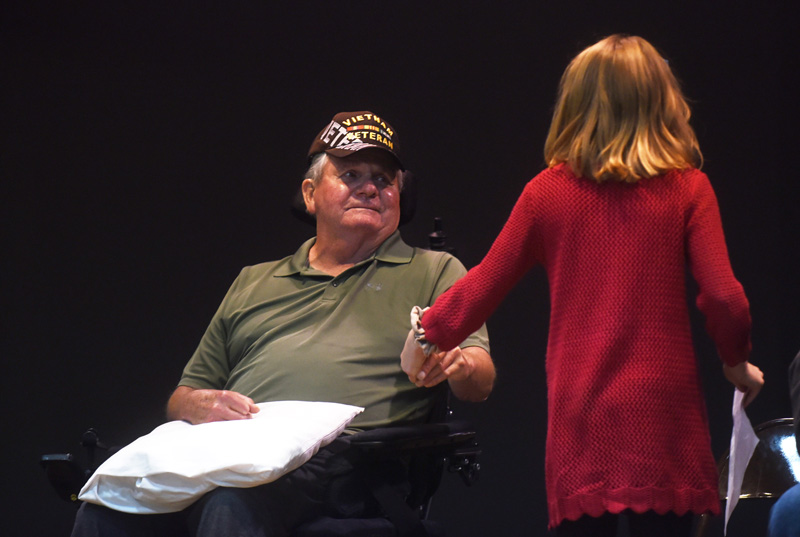 Veteran Paul Kelsey Sr. holds the hand of his granddaughter, fourth-grader Grace Bryant, after she read his biography during a Veterans Day ceremony at South Bristol School on Tuesday, Nov. 13. (Jessica Picard photo) 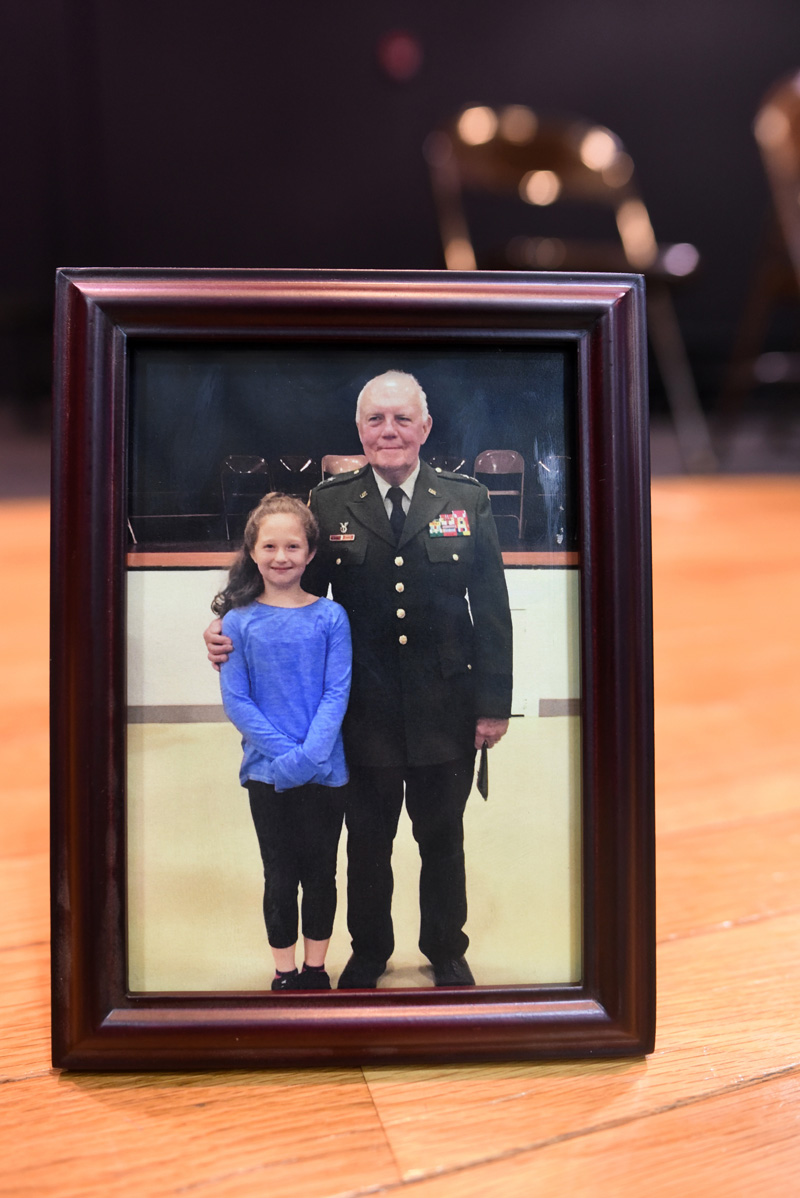 This was the second consecutive year and the fifth year overall for the special assembly, according to Principal Scott White.

“It’s my hope that these are memories for both the children who are reading the biographies as well as those whose biographies are being read,” White said.

The ceremony began with students leading the posting of the colors and the Pledge of Allegiance, and the crowd singing the national anthem.

Eighth-grader Alexandria Libby welcomed the audience and introduced the veterans seated on stage, as well as the students who would read the veterans’ biographies.

White then spoke, saying the assembly was in honor of “service to a cause greater than self.”

Seventh-grader Ella Pendleton read the biography of veteran Scott Farrin, who enlisted in the U.S. Navy in 1974.

“He needed to get out of South Bristol and learn a trade,” Pendleton said of Farrin. “He figured the best way to accomplish this was serving his country at the same time.”

Farrin was trained as an electronics technician and worked on shipboard radars.

Bryant said her grandfather “proudly served his country in the 101st Airborne Division from 1966-1968 and was in the Vietnam War for one year.”

“His most memorable experiences were traveling up the coast by helicopter, jumping out of planes here in the states, having a duck for a pet while stationed down south, and, most of all, wearing his uniform proudly and representing his country,” she said.

“Thank you for your service, Papa,” she concluded.

Fifth-grader Avalee Brightman-Uhl read the biography of her grandfather, Michael Uhl. Uhl, who was born in New York and now lives in Walpole, served as a lieutenant in the U.S. Army and led a combat intelligence team in Vietnam.

After serving, he became an active opponent of the war. He co-founded Citizen Soldier, an advocacy group for veterans and soldiers, and co-wrote “GI Guinea Pigs,” a look at the health effects of herbicides like Agent Orange on American GIs who served in the war.

Fifth-grader Gabe Lombardo read the biographies of his mother and father, both Marines.

His father, Justin McCalmon, joined the U.S. Marine Corps in 2001 and was deployed to Kuwait and Iraq. He is a master sergeant.

“He cannot be here with me today because he is currently deployed to Norway,” Lombardo said. “I love him and I miss him greatly, but I am so proud of my dad.”

Lombardo’s mother, Maria Lombardo, joined the Marines in 2005 as an aircraft rescue firefighter. She retired as a sergeant in 2012.

Fifth-grader Violet Holbrook read the biography of veteran Larry Kelsey, who served in the U.S. Army from 1958-1966.

Edwards served in the U.S. Army for 37 years, including multiple tours in Vietnam, and retired at the rank of major general.

A moment of silence was observed and taps was played. Third-grader Helen Rice retired the colors, carrying the American flag through the audience.

“I think those young people did a great job. I’m very proud of them,” Farrin said after the ceremony.

Larry Kelsey said assemblies like Tuesday’s are important for schools.

“It’s for our heritage, for kids to know the sacrifice that has been made for their freedom,” he said.