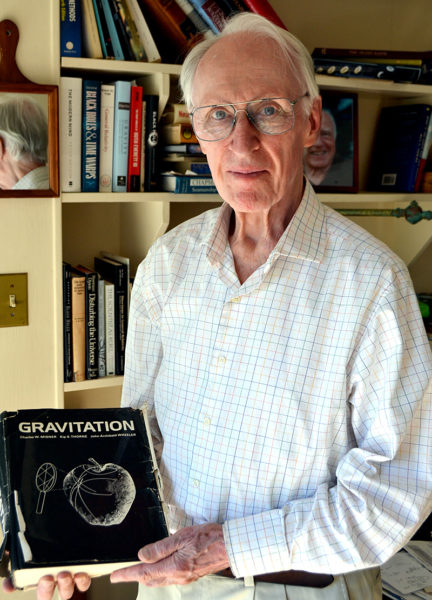 Charles Misner holds a copy of “Gravitation,” the physics textbook he wrote with Kip Thorne and John Wheeler at his home in South Bristol in the early 1970s. Misner is a renowned physicist who has studied general relativity theory for the past 50 years. (Maia Zewert photo)

A physicist and summer resident of South Bristol has watched the study of general relativity, the area he has devoted 50 years of his life to, become one of the most exciting fields of study in physics.

Charles W. Misner, 84, was one of the recipients of the Albert Einstein Medal in 2015 for a series of equations known as Arnowitt-Deser-Misner formalism, otherwise known as ADM formalism.

Published in 1962 and named for its authors – Richard Arnowitt, Stanley Deser, and Misner – ADM formalism takes Einstein’s equations for general relativity and makes them easier to understand.

Developed by Einstein between 1907 and 1915, general relativity is a theory of gravitation. According to the theory, observed gravitational effects between objects are a result of the warping of space and time.

The study of general relativity over the years has helped scientists develop a better understanding of black holes and predict gravitational waves.

“We found a way to rewrite Einstein’s equations so they were easier for most physicists to get a feeling for what they were saying,” Misner said.

Misner’s first exposure to the field of science dates back to when he was a young boy and he received a chemistry set as a gift. Misner’s parents allowed him to set up a lab in the basement and buy chemicals using money he earned from a paper route.

Misner read calculus and chemistry textbooks on his own, growing his understanding of the field. When he enrolled in college, he decided to major in chemistry, however, after a few weeks, he found it didn’t interest him and decided to pursue a new path.

After speaking with the head of the math department, who shifted Misner into sophomore-level calculus classes, Misner decided to pursue physics.

“I continued to take a lot of math, but I wanted to be closer to the real world, which is why I chose physics,” Misner said.

Misner graduated from the University of Notre Dame with a bachelor’s degree in physics in 1952. He then enrolled in Princeton University, where he would later earn his master’s and doctorate in physics.

While at Princeton, Misner worked with John Wheeler, a well-known American theoretical physicist with numerous achievements, including working on the Manhattan Project.

Wheeler, who passed away in 2008 at the age of 96, is also viewed as responsible for reviving interest in general relativity and coining the term black hole.

When he was first starting out in the field of physics, studying general relativity was considered a “career-killer” by many, Misner said.

“There hadn’t been an experiment done in 40 years. The field was considered dead,” Misner said. “A lot of mathematicians were playing around with it, but they weren’t doing any experiments.”

Misner said he chose to work with Wheeler because he seemed “the most optimistic” about the field. Eventually, the technology caught up, and scientists were able to conduct experiments needed to study the field, Misner said.

During the summers of 1970 and 1971, Misner, Wheeler, and Kip Thorne met daily at Wheeler’s house on High Island in South Bristol to write “Gravitation,” a 1,200-page graduate-level textbook on Einstein’s theory of gravity.

“Gravitation” was published in 1973, is often cited in articles and review journals, and has become a standard reference for the study of general relativity, Misner said.

Misner taught at Princeton in the physics department from 1956-1963, first as an instructor before becoming an assistant professor.

In 1963, he joined the faculty of the University of Maryland’s Department of Physics and Astronomy, where he taught undergraduate and graduate classes. He served as the doctoral advisor for 23 students, more than half of whom are now full professors in physics or mathematics.

One of Misner’s doctoral students, Richard Isaacson, became a program officer with the National Science Foundation, which funds academic research.

On Feb. 16, LIGO announced it had successfully made the first observation of gravitational waves in September 2015.

The observation occurred for two-tenths of a second, however, the wave matched the predictions of general relativity, Misner said.

“It was a major accomplishment,” Misner said. “For people like me it was extremely gratifying to see that this kind of theoretical stuff we had been playing with for 50 years had now been verified through direct observation.”

Watching the field of general relativity evolve from a “career-killer” to one of the most exciting areas of experimentation has been a highlight of Misner’s 50-year career.

“It went from being considered out of bounds for most to try to being one of the most exciting things going on in physics these days, and I’ve been involved in it directly through that whole time.”

Misner retired from lecturing in 2000 and is now professor emeritus of physics at the University of Maryland. He and Susanne Misner, his wife of 57 years, have four children.