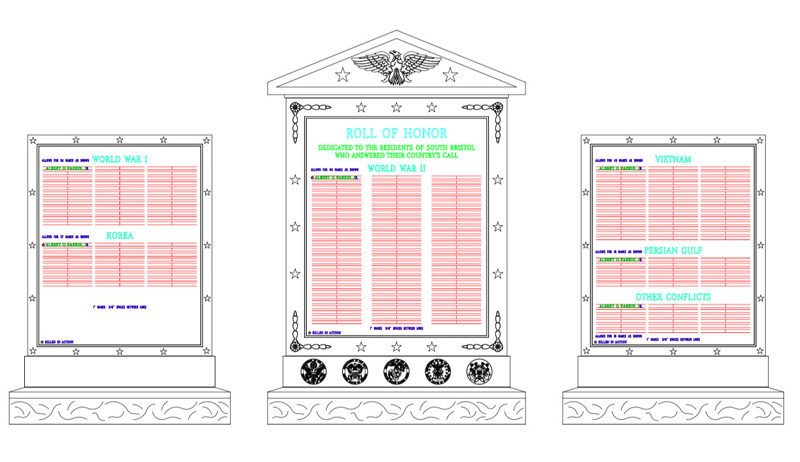 A rendering of the new veterans memorial at the West Bristol Cemetery in Walpole. (Image courtesy Thomas Stevens)

The South Bristol Board of Selectmen reviewed renderings of a new veterans memorial and discussed the use of security cameras at South Bristol School on Thursday, Aug. 9.

Thomas Stevens, of Thomas A. Stevens Cemetery Memorials, of Newcastle, showed the selectmen the renderings. The selectmen awarded a $55,280 contract for the project to Stevens’ business July 12.

The memorial, at the flagpole in front of the West Bristol Cemetery in Walpole, will consist of three stones. The center stone will honor World War II veterans, while the other two stones will honor veterans of all other wars and conflicts.

The selectmen also discussed a past veterans memorial.

South Bristol’s original World War II Veterans Roll of Honor was dedicated in May 1944. The wood memorial stood in front of the old Rutherford Library.

The memorial fell into disrepair and was removed in the mid-1950s, according to Scott Farrin.

Farrin, whose father, Albert D. Farrin Jr., served in the U.S. Navy during World War II and had his name on the original roll of honor, brought the proposal to create a new monument to the selectmen in 2015.

“I had the pictures that my father saved of the dedication of the old memorial and was amazed,” Farrin said. “I noticed that the photo he took of the memorial didn’t contain all of the people from South Bristol that had served. This was confirmed when I researched the old editions of The Lincoln County News, finding that the memorial was dedicated on the Sunday before Memorial Day 1944.”

The center monument of the new memorial will be similar in appearance to the original.

The granite center monument will measure 6 feet wide and 7 feet tall, with a steeled finish on all sides. It will have the title World War II, with names engraved in four columns. There will be stars and filigree engraved into the stone.

The 5-by-6 wing monuments will also have a steel finish, with the conflict titles and names engraved on each.

Stevens said he hopes to complete the memorial by Veterans Day.

Voters authorized the selectmen to spend up to $75,000 from the Stratton Earnings and Dividend Account for a veterans memorial at the annual town meeting March 14.

The selectmen discussed the recent installation of security cameras at South Bristol School.

The South Bristol School Committee discussed the installation at its meeting Aug. 7 and decided to consult the selectmen, along with the Lincoln County Sheriff’s Office and an attorney at Drummond Woodsum, after members expressed mixed feelings on the subject.

According to SBS Principal Scott White, five cameras have been installed so far, four inside and one outside. The school has purchased a couple more cameras to go outside.

The intent is to strengthen school security and discourage poor student behavior, according to White. He has an app on his phone that allows him to access the camera footage.

The committee decided to leave the outside cameras on, but turn the inside cameras off until more discussion takes place. It also voted that White would be the only person with access to the video.

“We don’t support (cameras) inside,” Ken Lincoln, chair of the board of selectmen, said after the selectmen had a brief discussion.

The selectmen expressed concern about having cameras in the gym, which is the town’s polling place, as well as someone having access to the footage through their smartphone.

The selectmen were in support of having cameras outside the school, however.

The selectmen reviewed the state’s most recent valuation of the town, at $659.15 million. Last year’s valuation was $619.9 million.

The selectmen awarded a $3,240 contract to Sprague Transport & Excavation Inc., of Damariscotta, for the replacement of culverts on Carl Bailey Road, Clarks Cove Road, and Ridge Road.