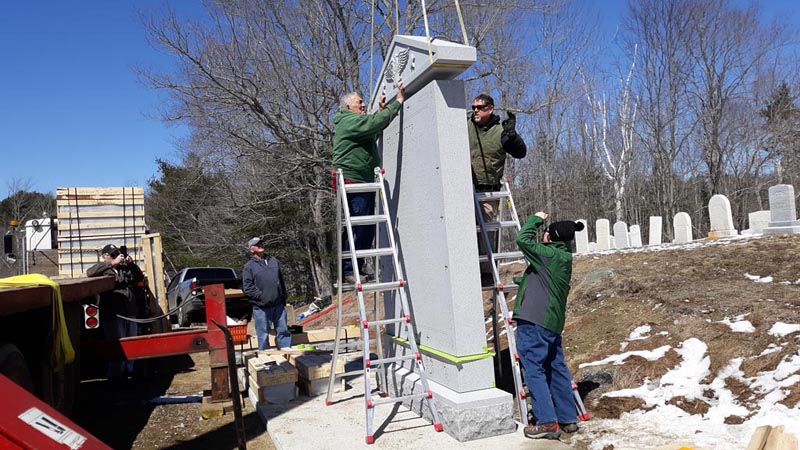 Eighty-two-year-old monument setter Francis Tash, of Barre, Vt., guides the top piece of a monument into place at West Bristol Cemetery in Walpole on Thursday, April 11. Thomas A. Stevens Cemetery Memorials, of Newcastle, and subcontractors worked throughout the day to set up South Bristol’s new veterans memorial. (Candy Congdon photo)

As of Thursday, April 11, an imposing three-part veterans memorial now graces the West Bristol Cemetery on Route 129 in Walpole.

Fabrication of the monument began in September, but South Bristol veteran Scott Farrin first initiated the project several years ago.

“It all started out when we were cleaning out my mother’s house and going through my father’s foot locker from World War II,” Farrin said. “We found pictures of the ceremony on May 30, Memorial Day in 1944, just before D-Day, of the dedication of the town’s prior memorial in front of the old Rutherford Library.”

Farrin approached the South Bristol Historical Society about replacing the old memorial. The historical society referred him to the South Bristol Board of Selectmen, which was willing to cover the cost with town funds as long as the memorial listed veterans of all wars.

Farrin asks anyone who has photos of the original ceremony in 1944 to contact him so the photos can be scanned into the historical society’s records.

Historical society member Carol Kelsey was instrumental in the massive amount of information-gathering necessary to begin the project.

Kelsey said several lists that had been compiled previously by residents and a cemetery list of veterans were the basis for collecting the names. 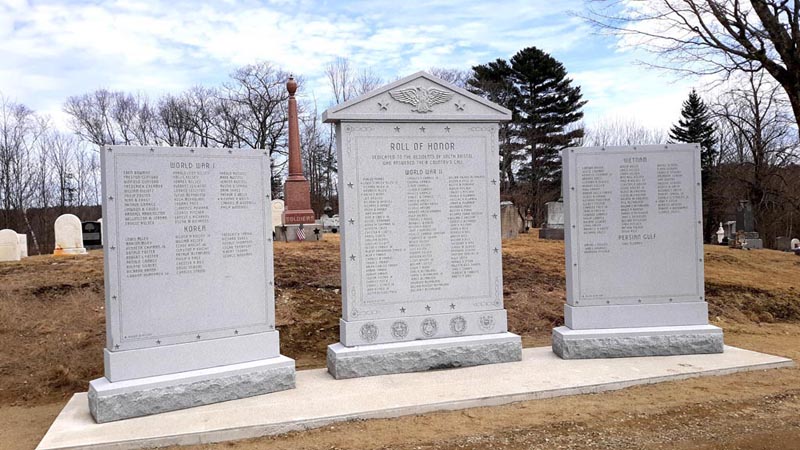 South Bristol’s new three-part veterans memorial is complete after a full day of setting stones and sealing joints. The memorial at the West Bristol Cemetery in Walpole honors local veterans from World War I and II, Korea, Vietnam, and the Persian Gulf. (Candy Congdon photo)

She said the old wooden memorial at the Rutherford Library was destroyed in the ’60s or ’70s, but from several photographs, volunteers were able to ascertain the names.

The South Bristol Historical Society placed booklets at the post office, town hall, library, and historical society for folks to add names and information about veterans. Kelsey’s husband went through all the town reports beginning with 1915, when South Bristol separated from Bristol, as many listed veterans and veterans’ widows due to their tax status.

“There was an interview process with town residents from both the Walpole and South Bristol villages who had information from friends and relatives,” Kelsey said. “This information gathering took place over a two- to three-year period. The town hall, library, and SBHS all have copies of these initial lists available to the public.”

Meanwhile, Thomas A. Stevens Cemetery Memorials, of Newcastle, prepared rough drafts and specifications for the design of the memorial, which the selectmen approved in December of 2017.

Voters then approved the expenditure of up to $75,000 for the memorial at town meeting in March 2018. A request for bids went out and Stevens’ company was awarded the contract. The funds will come from earnings on the town’s investments.

The order for the memorial was placed last July. The granite for the monuments was quarried and the monuments manufactured in Barre, Vt. by longtime granite manufacturer Buttura & Gherardi, according to Thomas A. Stevens. The manufacturer emailed proofs of the design, which imitates the original wooden memorial made at the end of World War II, then created full-size drawings for approval by the selectmen.

Actual fabrication began in September 2018. The granite was ready for engraving in December. The contractor shut down for the winter and resumed work on the engraving in February. The monuments were completed in March and the wait for suitable weather began.

The stones are now in place. Chester Rice, chair of the board of selectmen, said there will be some additional ground work done in the next week or two, and a dedication will be planned for sometime around Memorial Day.