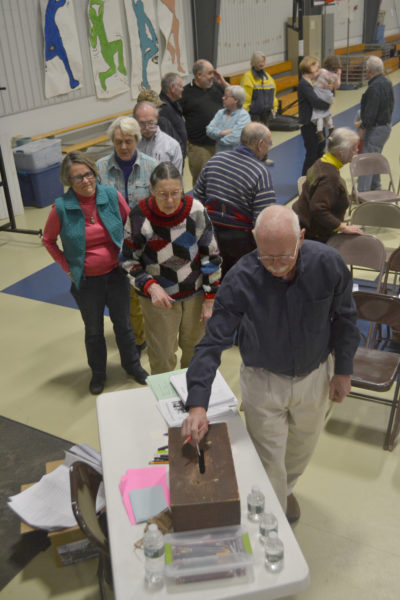 South Bristol residents wait in line to cast their ballots on an warrant article related to the education budget during the annual town meeting at South Bristol School on Thursday, March 16. (Maia Zewert photo)

South Bristol residents made quick work of the annual town meeting’s 40-article warrant in the span of 1 1/2 hours the evening of Thursday, March 16 at South Bristol School.

During the discussion about the budget for the highway department, South Bristol Budget Committee member Chuck Plummer thanked Adam Rice, the town’s plowing contractor, for his work to keep the roads clear for the past two snowstorms. The audience gave Rice a round of applause for his efforts.

The South Bristol Fire Department’s $60,000 budget, which includes an $8,000 increase in payroll, passed without discussion.

The increase will allow firefighters to receive compensation for meetings, trainings, truck checks, and station maintenance, all mandatory tasks. Previously, firefighters only received pay when responding to emergency calls.

Terry Mitchell, a captain in the fire department, asked if the South Bristol fire station would receive any maintenance in the upcoming year. Selectman Ken Lincoln said funds are available for work on the building.

During a 15-minute intermission, residents toured the school’s kitchen, a project they approved during the 2016 town meeting.

After the meeting, moderator Jim Gallagher swore Chester Rice and Don Edwards in to their respective offices. Voters re-elected Rice for a seventh consecutive three-year term as a selectman with 48 votes.

Write-in candidate Edwards was elected to the South Bristol School Committee with 46 votes. Edwards replaces Clay Gilbert, who did not run for re-election.