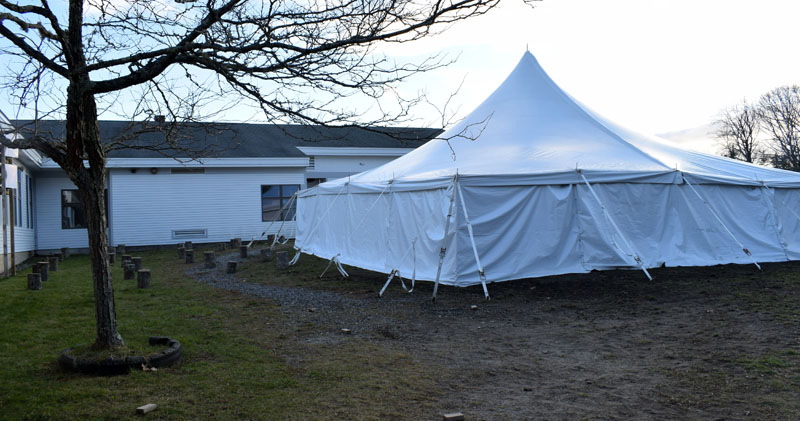 A tent was installed at Bristol Consolidated School to allow for more space for students. The school is currently seeing increasing enrollment numbers, according to BCS Principal Jennifer Ribeiro. (Evan Houk photo)

After a discussion about space concerns and rising enrollment at the Bristol School Committee’s Nov. 4 meeting, a new committee has formed to address urgent space needs and look for long-term solutions, including an addition or possibly a new building.

During the Nov. 4 meeting, Bristol Consolidated School Principal Jennifer Ribeiro said that due to increasing enrollment numbers, the school is now somewhat limited on space. At present, 11 more students are receiving on-site, in-person instruction compared to one month ago for a total of 199 students, giving BCS its largest enrollment in at least 10 years, Ribeiro said.

If the school adds any more students, Ribeiro said BCS may have to switch to a hybrid learning model in order to have fewer students in the building at one time. An adjustment was made to the school’s Pre-K program, which saw its large class split into two groups with students attending school three days a week instead of the usual five days a week, according to Darin Carlucci, chair of the school committee. Carlucci said the school is looking at another full Pre-K program next year.

“We have families moving in from all over, mostly Maine…we also have some off-site learners returning to on-site,” Ribeiro said.

The school will continue to need more space next year, regardless of whether COVID-19 physical distance protocols are in place, Ribeiro said.

To help mitigate the space issues in the short-term, a tent was installed near the school to allow more space for staff and students. In addition, a building committee was formed to focus on urgent space needs, like the construction of an addition onto the school.

The school committee briefly discussed the possibility of an addition to the school or a long-term goal of building a new school during the Nov. 4 meeting.

John Carroll, a facilities consultant for BCS, said an approximately 80-by-80 foot addition on the back of the gymnasium would likely cost $2 million to $3 million. The school committee briefly discussed possible funding from the state that could help defray the costs of an addition.

“In my opinion, the best approach would be to come off the back side of the gym where you have a two-story building currently. With an 80-by-80 building, you could gain at least three classrooms and a bathroom, and possibly dining space for a cafeteria,” Carroll said.

Carroll recommended hiring a contractor that can perform a design-build project using an in-house architecture firm. He said he would start working on a conceptual budget for the project.

He said he would also look at doing some energy recovery upgrades to the building and the addition when it is constructed.

“We need all that information to make a decision whether we renovate or build a new school,” Carlucci said.

During the Oct. 21 meeting of the Bristol Board of Selectmen, Hall mentioned there have been rumblings about the town needing a new school within 10-20 years. The selectmen then discussed establishing a committee to update the town’s comprehensive plan at annual town meeting in March 2021.

In an email, Hall said if the school committee gets budget numbers together, the plan for a new school can be added to the town’s long-term comprehensive plan agenda to gradually set aside the funds for a new school.

He said that if a new school was proposed, it would likely be the biggest item in a capital spending 10-year plan.