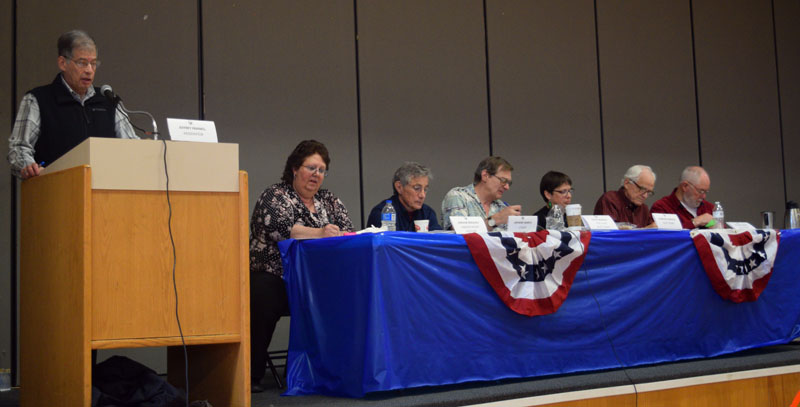 After nearly a half-hour of debate, Whitefield voters passed a local food sovereignty ordinance at town meeting, Saturday, March 16. Whitefield is the first Lincoln County town to pass food sovereignty, which the state first allowed in 2017.

The 64 voters at town meeting were located on a spectrum of steadfast opposition to enthusiastic support for the ordinance.

A food sovereignty ordinance allows any person to sell food or food products at the site of production to a willing consumer face to face, without licensing. Meat and poultry continue to fall under federal and state standards.

Robin Chase, owner of Chase Farm and Bakery, prepared a statement to read regarding the ordinance.

“I’m about buying local, but I want you to strongly think about food safety. It’s very important to you and your families,” she said.

Other comments were made on food safety, including by Whitefield Planning Board member Steve Sheehy. “I think it’s a well-meaning concept,” Sheehy said.

“I’d feel better about it if it was just about garden produce, but the minute you start processing food, and turning that garden produce into tomato sauce … there is a possibility of something going wrong,” he said.

Selectman Bill McKeen was a liaison with the Whitefield Planning Board while it was reviewing a template ordinance and giving it to the town’s attorney.

McKeen was asked if other towns have experienced food safety issues after enacting similar ordinances. He said he has not heard of any health issues in the nearly 50 towns that have enacted the ordinance across the state.

“Even though we may have the impression that we’re buying food in a regulated system that keeps us safe, that’s not at all true,” Robin Huntley said. Look at what’s happened with lettuce and spinach.”

Another comment in opposition suggested that the ordinance would give Amish farmers an advantage. 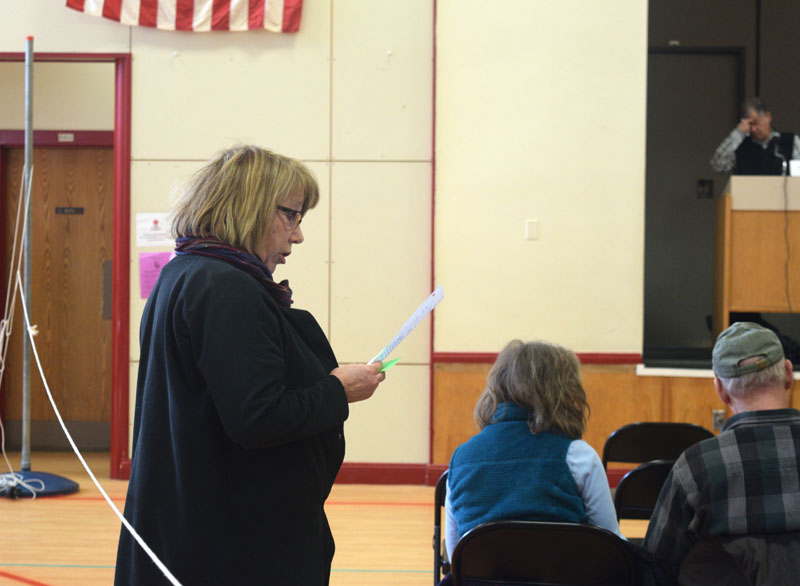 When a resident asked if the selectmen wanted to pass the ordinance for the Amish, McKeen said, “I’m not promoting this ordinance. It’s been popular throughout the state. To me, there is no difference between what the Amish do and any other local farmer.”

Later in the discussion, a voter said the proposal of the ordinance and the influx of Amish residents was a coincidence.

Resident Christine LaPado-Breglia said licensed food retail businesses, such as Chase Farm and Bakery, have the option to sell their products off their site of production, while those without licenses cannot.

“I was a big part in bringing the Amish here … this is a hard spot for me to be in, because I think a lot of them, and I’m not aiming this at them. They are great people,” Chase said. “It’s just not them, it’s anyone. If the Amish weren’t here, I’d be standing here giving my same spiel — food safety, food safety.”

Another resident thought passing the ordinance would be redundant because people already sell food without licenses at events, such as the town meeting itself.

However, the loudest applause came after Huntley, a younger Whitefield resident who moved back to her hometown, spoke.

“My generation is really interested in moving to rural areas, starting small farms and businesses, being self-sufficient and doing homesteading,” she said. “They want this ordinance in order to come here.”

“We have a town of beautiful old farms. The Amish are buying them because they fit their needs. There are people like me out there that want it to fit their needs too,” Huntley said. “In order to attract people to come live here and so great things keep happening in Whitefield … If we want our town to continue to exist — we need to take this seriously.”

After the meeting, McKeen said he was surprised by the amount of debate on food sovereignty.

“It hasn’t been controversial in most of the towns I’ve read about, so I was surprised,” McKeen said. “The one point I wanted to make and I let it go was that nearly 50 towns have passed it where there are no Amish communities, so therefore, there is no connection; it’s coincidental, like one person said.” 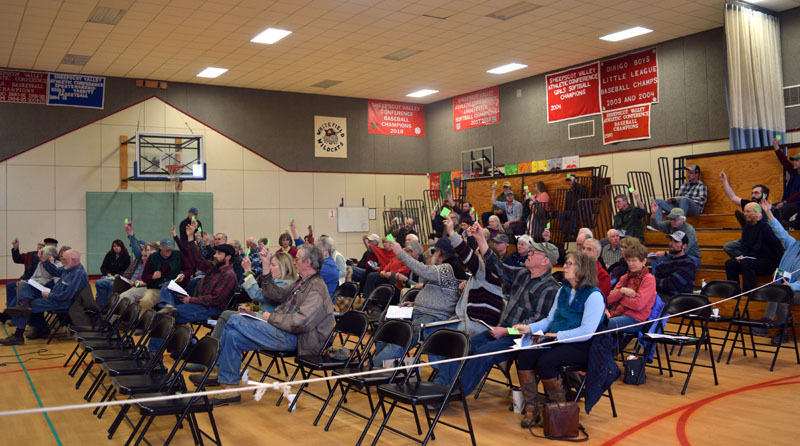 After much debate, a majority of Whitefield residents vote in support of a local food sovereignty ordinance during annual town meeting in the Whitefield Elementary School gym Saturday, March 16. (Jessica Clifford photo)

Selectman Charlene Donahue said she has to do more research on water treatment systems. She knows it will cost close to $10,000 for a treatment system if E. coli is found in the water.

In an earlier article, voters approved $1,000 for maintenance of the public water supply.

Donahue explained the problems with the public water supply since summer 2018.

For the last few months, residents have been able to get water from a freeze-free faucet on the southwest corner of the fire station. The water originates from a well behind the town office.

Early tests showed the water was clean, but a mid-November test revealed the presence of coliform bacteria. The well was shocked in mid-December, but has the chance of growing bad bacteria again in the spring.

The school’s well shares the same aquifer as the public water supply, and it has chronic contamination and a chlorine treatment system.

“We need to have a public water supply, just for drinking. We don’t need it for everything,” Albert Boynton said.

A resident asked if Whitefield Elementary School could be used as a public water supply.

Donahue said the school does not have a spigot outside and would most likely not want people coming and going during school hours.

She said having potable water at the fire station would also help in case the station needs to serve as an emergency center for the town.

Sheehy asked if the board has surveyed the town to see if there is a need for a public water supply. Donahue said it has not.

After the meeting, Donahue said that moving forward the selectmen are “going to find out how many people use it, how much water is used, and explore some of the possibilities of water sources, and certainly look into the cost of a water treatment system.” 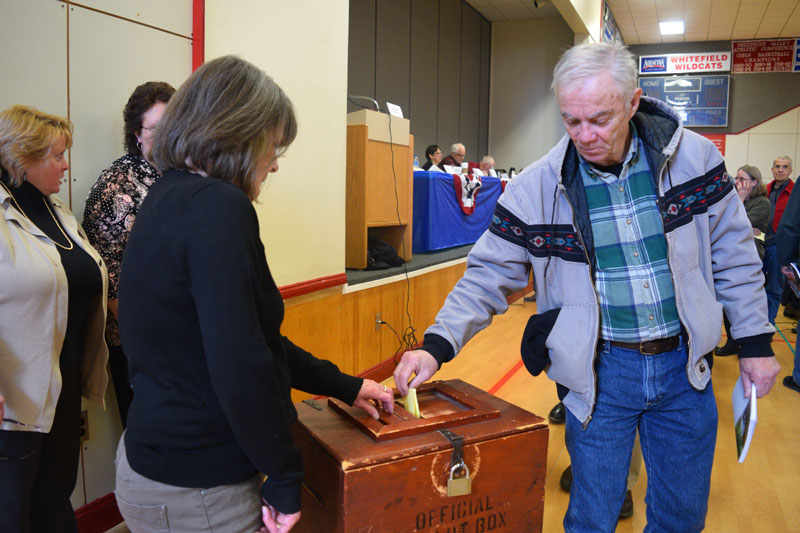 Article 16, to see what the town would raise and appropriate for the Whitefield Planning Board and code enforcement officer, was amended from $11,400 to $12,400.

The increase is to go toward paying a recording secretary to keep minutes at planning board meetings.

Stephen Smith said, “We are losing our very generous record keeper … She kept our nose clean,” adding later, “We need someone who is skilled, and attends to detail” to do the recording work.

He said a good recording secretary would help the town avoid legal trouble.

He first moved to raise the amount in the article by $6,000. Sheehy suggested lowering the amount to $1,000.

“The lack of a knowledgeable recording secretary makes me really nervous,” Torbert said.

He said approving $6,000 would not require the board to spend all the money.

Selectman Lester Sheaffer thought the selectmen should research the amount of money needed for a recording secretary and put it in next year’s budget.

The vote on the amendment was too close to determine a winner right away, so a hand count was necessary. The amendment failed, 34-30.

A motion for another amendment, to raise the original amount by $1,000, was put forth.

Sheehy said the amount would allow a secretary to make $20 an hour for 50 hours a year.

Whitefield voters approved all 45 articles. A few were amended based on motions by the selectmen to make minor changes to language in the articles.

One of the most recurring issues throughout town meeting was the inability to hear people speaking.

Dan Joslyn said the town should bring back microphone runners, so people could hear each other’s comments and questions. The crowd agreed.

Donahue thanked the two members leaving the board of selectmen this year.

“One of them is Tony Marple, who has been on for two terms, and has been chair for two years,” Donahue said. “He’s just been a fantastic member of the board and leading this town … he’s really appreciated tremendously.”

She noted his financial skills, his work with Amish residents, and his work to negotiate payment plans with property owners behind on their taxes.

“The other is Frank Ober. He’s been on for three terms, that’s nine years on the board. … He works on the roads committee and has done all kinds of work on the town office and making tremendous improvements there,” Donahue said, adding that his thoughtfulness and good ideas have helped the town.