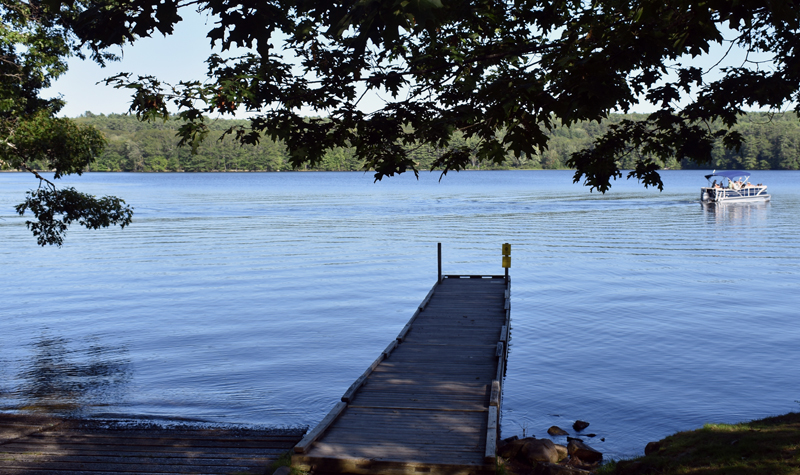 A pontoon boat cruises by the boat ramp on Damariscotta Lake in Jefferson. (Alexander Violo photo)

The Damariscotta Lake boat launch on Bunker Hill Road in Jefferson closed for construction Monday, Aug. 19 and will remain closed until Sept. 21.

A contractor will replace the boat ramp, expand the parking lot, make improvements to bring the facility into compliance with the Americans with Disabilities Act, and add an accessible path to the water, according to Diano Circo, chief planner at the Maine Department of Inland Fisheries and Wildlife.

A ramp on Vannah Road in Nobleboro will offer the only public access to the lake in the meantime.

“It’s a small landing with limited parking. It’s shallow, but it’s the only other public landing on the lake,” Circo said.

Town Line Camping, off East Pond Road in Nobleboro, offers use of its ramp for $5. The campground also has limited parking, however, according to Circo.

Circo said the planks of the Jefferson boat ramp were in need of replacement.

“They had been in there for 25 years and there was ice damage from all the winters,” Circo said. 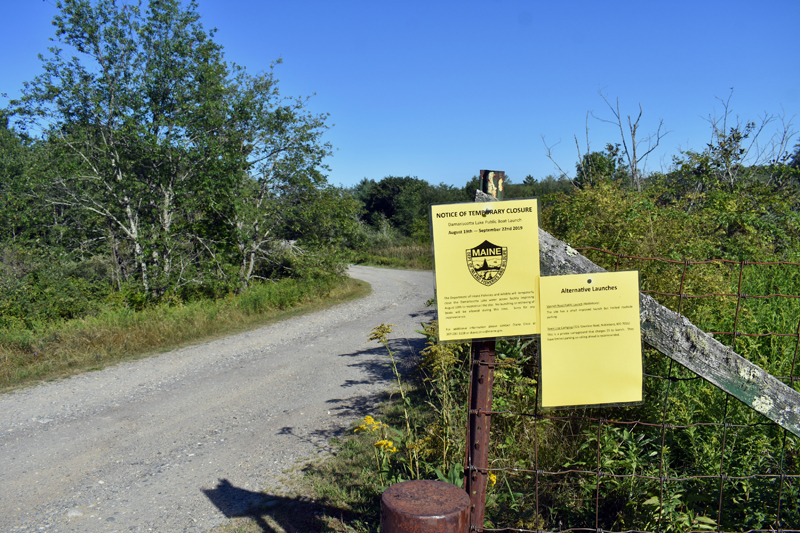 A notice at the entrance to the state boat launch on Damariscotta Lake in Jefferson informs boaters of the facility’s closure. (Alexander Violo photo)

Farley & Son Landscaping, of Rockport, is the contractor. The project will cost about $200,000, according to Circo, who said the bid came in under the project budget.

The contractor started work Monday. The end date of Sept. 21 is a projection, and work could finish before or after that date, Circo said.

The closure of the boat ramp with little notice drew some criticism from lakefront property owners and residents.

Ali Stevenson, communications and membership manager at Midcoast Conservancy, said the organization did not receive advance notice of the closure and found out by accident.

The Edgecomb-based nonprofit, formed by the merger of Damariscotta Lake Watershed Association with three other conservation organizations in 2016, works to keep the lake free of invasive species, among other initiatives. 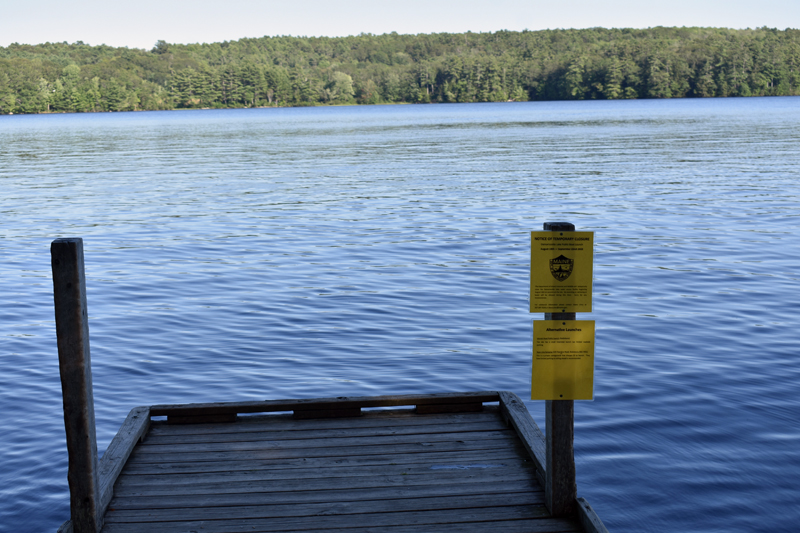 A notice on the end of the dock at the state boat launch on Damariscotta Lake in Jefferson informs boaters of the facility’s closure. (Alexander Violo photo)

The conservancy posted notice of the closure on its Facebook page Wednesday, Aug. 14.

“I don’t know anybody who found out on purpose. I sent a letter out to our members on the lake and we were deluged with responses. I have no idea why they would do this before Labor Day,” Stevenson said. 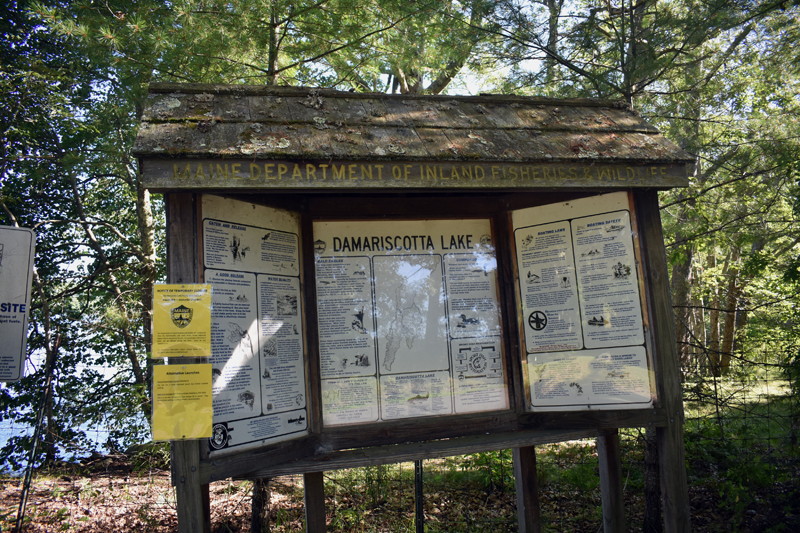 A notice of temporary closure on the kiosk at the Jefferson boat launch. (Alexander Violo photo)

According to Jefferson Town Administrator Lynne Barnikow, the town received notification from the department about two weeks ago.

She believes the town office was notified earlier by phone, but said the state owns the landing and the town does not have jurisdiction over the facility.

Circo said the timing of the project came down to contractor availability and permits for when work can take place in and around bodies of water.

“The permits allow us to be in the water only during certain times of the year,” Circo said.

The project also involves tree removal. To protect bats, tree removal was not done during the bat pupping season in June or July, Circo said.

The U.S. Department of Agriculture’s Natural Resource Conservation Service recommends against tree-cutting in New England during those months. 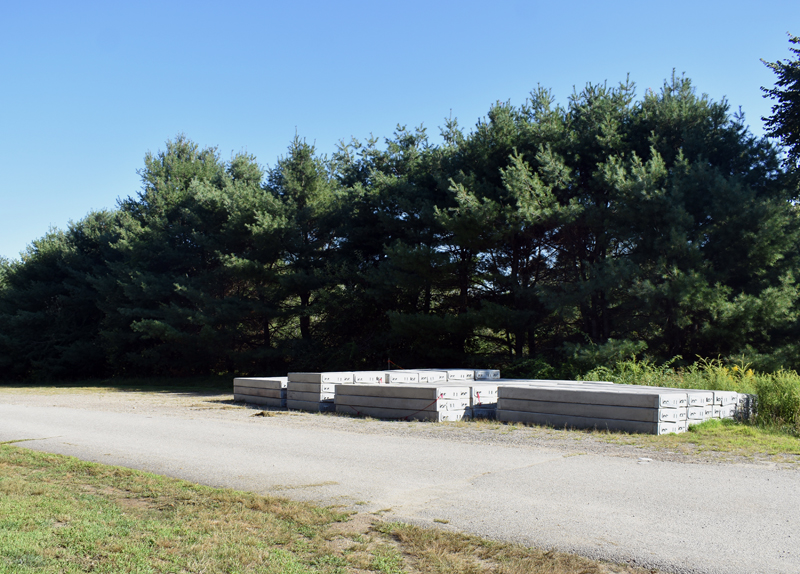 Floats in the parking lot of the state’s boat launch on Damariscotta Lake in Jefferson. (Alexander Violo photo)

“We couldn’t start until after July. It really narrows the window down for us,” Circo said.

“We post notice as soon as the contractor tells us the dates. I did it the day I found out,” Circo said, referring to the Jefferson landing.

Circo said the department also notifies municipalities, and both Jefferson and Nobleboro were informed of the closure. It was not clear whether Newcastle was notified.

Circo said it can be difficult to reach all the property owners on a large lake, and the department will take a different approach to notification in the future.

“We are looking at how to go about the process in the future. We are always looking to improve. We are going to try and reach out to local papers early in the season. We won’t have exact dates, but we will be able to get the word out sooner. It is something we will do differently in the future,” Circo said.