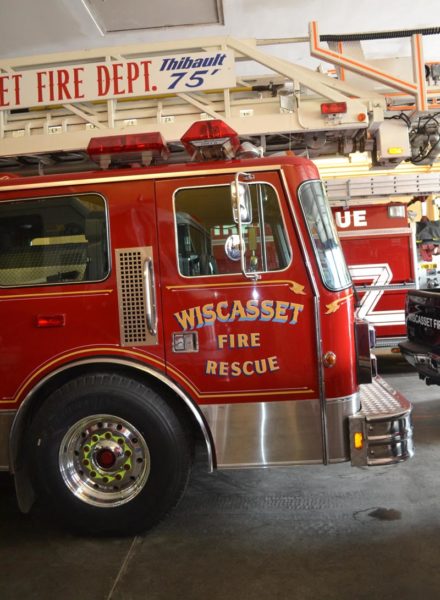 Lime green indicators on the lug nuts of Wiscasset Fire Department’s ladder truck on June 29. The indicators were added to the truck after an accident in June 2015. (Abigail Adams photo)

A June 2015 accident that took the Wiscasset Fire Department’s ladder truck, Ladder 1, out of service for more than a year is now the subject of a lawsuit. The State Farm Mutual Automobile Insurance Co. is suing the town of Wiscasset for the cost of the insurance payment made when the wheel of the ladder truck separated from the vehicle and rolled across the roof of a car parked at the Little Village Bistro.

In a complaint filed in Lincoln County Superior Court last month, State Farm, represented by Cheryl Cutliff, of Basham & Scott, argued that the accident was the result of negligence on the part of Wiscasset and Wiscasset volunteer firefighter Jacob Williams, the driver of Ladder 1 at the time of the accident.

State Farm is seeking a judgment in the amount of $4,356.49, the cost of the repairs and rental reimbursement paid to Northrup and Carole Fowler, of Edgecomb, owners of the 2009 Subaru Outback damaged in the accident.

Wiscasset, represented by Kasia Park, of DrummondWoodsum, has denied the claims of negligence.

During a driver training exercise on June 10, 2015, the lugs sheared off the rear passenger-side wheel of Ladder 1, causing the wheel to separate from the vehicle as it traveled south on Gardiner Road.

The wheel bounced off a utility pole, which knocked out power for a portion of town, and rolled across the roof of the Fowlers’ vehicle before coming to a rest, The Lincoln County News reported at the time. The wheel hit the left rear roof of the Subaru, causing the roof to cave in and the back window to blow out.

State Farm is now seeking to recoup the insurance payment made to cover the cost of the damages. According to State Farm’s complaint, Wiscasset had a duty “to use reasonable care in the maintenance and operation of the fire truck.”

In the complaint, State Farm goes on to allege that Williams also had a duty to use reasonable care in the operation of the truck, which he breached “when he failed to secure all attachments on the outside of the fire truck, allowing a tire to fly off of the fire truck.”

The town of Wiscasset has denied the allegations and argued that the complaint comes after the allowable time limit to file a claim, is barred on several legal grounds, and Williams and the town are afforded immunity, or are protected from such claims, under state law.

Cutliff said she was unable to comment on pending litigation. Because the lawsuit is in an early stage, Park said she is not able to comment extensively. “It was an unexpected incident,” Park said, “but there was no negligence on behalf of the town or Mr. Williams.”

After more than a year out of service for repairs, Ladder 1 returned to service, with Wiscasset’s Fourth of July parade its first official act of duty since the 2015 accident. No cause or reason for the failure of the lug nuts was ever discovered, but lime green indicators were placed around the lug nuts on each of the department’s fire trucks to prevent future incidents, The Lincoln County News reported.