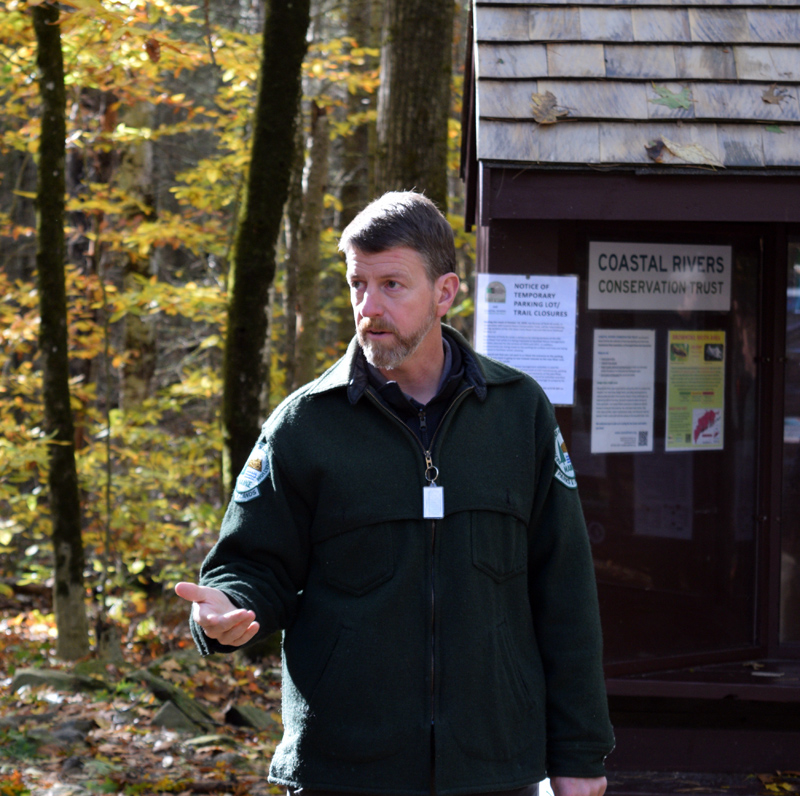 Stephen Richardson, senior forest engineer with the Maine Bureau of Parks and Lands, speaks about an upcoming timber harvest at Dodge Point in Newcastle during a meeting at the property Friday, Oct. 18. (Jessica Clifford photo)

The Maine Bureau of Parks and Lands is planning a timber harvest at Dodge Point, a state property in Newcastle popular with hikers, this winter and next.

The bureau owns and manages Dodge Point Public Reserved Land, in Newcastle, while Coastal Rivers Conservation Trust donors and volunteers assist with upkeep. The 500-plus-acre property has an extensive trail system and more than 1 1/2 miles of frontage along the Damariscotta River.

According to Coastal Rivers Conservation Trust Executive Director Steven Hufnagel, the last timber harvest at Dodge Point was in the late 1990s to early 2000s.

Stephen Richardson, a senior forest engineer with the Bureau of Parks and Lands, will be the chief forester for the harvest at Dodge Point.

The bureau receives no tax dollars for its work. The majority of its funding comes from forest management, Richardson said.

This winter, the timber harvest will take place on the west side of River Road – the side opposite the river. A contractor has not been selected.

“There is a possibility that it won’t even happen if I don’t get somebody,” Richardson said. The first forester the bureau selected has since backed out.

Two species the bureau will target are red pine and aspen trees.

The previous owner of the property, Edward Freeman, also harvested timber from the land.

“They always had some type of timber management, and part of that, obviously quite a long time ago, there were certain species planted here. The red pine you see here is not typically found in this area,” Richardson said.

The trees are not doing well because the soil is not the right fit, Richardson said.

The bureau will either mark the trees to come down with paint or delegate the selection process to the contractor.

“We are pretty involved in our management with our contractors,” Richardson said. “I’m probably going to be here every couple days.”

Richardson referred to the harvest as an improvement harvest or single-tree selection.

“We are trying to take, in most cases, the lower-quality trees, to improve the overall health of the forest. That’s why we mention the red pine and the aspen,” he said.

A person in attendance said people are concerned about the trails and how the harvest might impact them.

According to Richardson, the bureau chose to do the harvest in the winter because there is the least amount of ground impact to the trails and the soil in the woods when the ground is frozen.

“There will be some impact here; I’m not going to say there’s not,” Richardson said. “It will look different. There’s no question about that.”

Hufnagel asked Richardson about the timber harvesting around abutters’ properties.

“As far as work around where there is development and people’s homes, we do anticipate a lighter cut,” Richardson said.

Richardson offered to meet with abutters to discuss their concerns.

Carrie Levine, who lives and owns a business on River Road, asked if there was a set buffer between property lines and the harvesting area.

Richardson said there is not. The stopping point depends on the presence of “over mature” timber in the area, he said.

Jan Santerre, project canopy coordinator with the Maine Forest Service, said timber harvesting can have many benefits, such as improving wildlife habitat and access to woodlots.

Of when the bureau expects to do timber harvesting again, Richardson said the harvest cycle is around 15-20 years.

The timber harvest on the east side of River Road will take place in 2021.

“In preparation for the harvest on the eastern side of the River Road, there will be road improvements done starting next week,” Richardson said after Friday’s meeting.

The bureau timed the “parking lot improvements” and “road improvements” for after the Oct. 14 holiday, thinking they would have less impact on recreation, Richardson said.

“I will be honest with you, for construction it’s not the best time,” he said. “It’s wetter.”

The bureau will set up detour signs and rope to reroute walkers.

In addition to the timber harvest, the bureau will complete some smaller projects around the same time.

At the request of Coastal Rivers, Richardson said, it will remove a few trees from the main parking lot to facilitate plowing. It will fill in some holes in the front of the lot and probably grade the lot.

The parking lot will be closed at times during the work on the lot. The bureau will ask people to park in a new lot southwest of the main parking lot, on River Road, and to use the River-Link Trail to access the Dodge Point trail system.

“One of the things with an earthen dam is, it’s important to not let trees grow on it because they have root systems that go into the earth, which is the fill that holds the water back,” Richardson said. “If those roots are allowed to penetrate the dam, that’s the segue for water to get in the dam, especially if the tree dies, and you’ve got a passageway for leakage through the dam.”

There is already a small amount of leakage, Richardson said. However, it is not a major concern.

A couple people in attendance said the bureau needs to improve communication about upcoming projects with the public.

“We did have a meeting last spring. It was lightly attended. We weren’t surprised. We are open to better ideas on how to communicate,” he said.

Friday’s meeting had not been planned; however, it was thought to be a good way to share the plans for the project.

Of whether the work will impact hunting, Richardson said he does not expect it to. He does expect signage to protect the workers.

Hunting is allowed at Dodge Point, but weapons may not be discharged within 300 feet of any picnic or parking area, posted trail, or other developed area, according to a state brochure about the property.