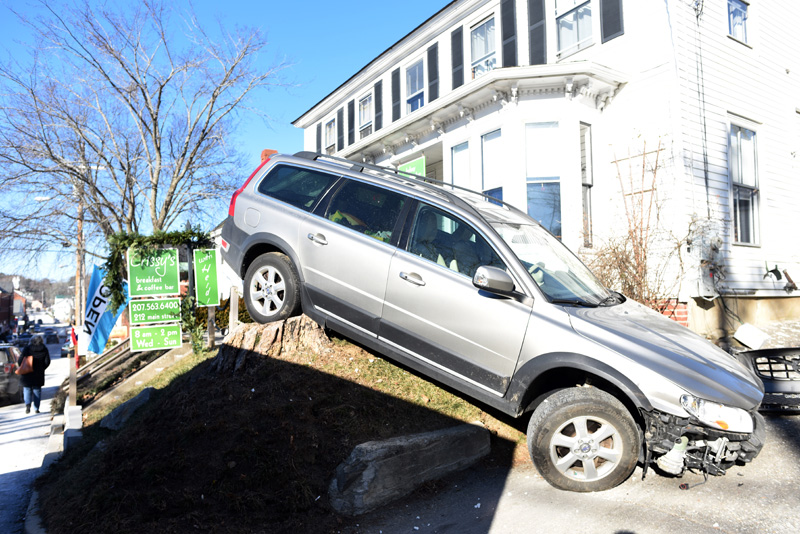 A station wagon at rest on a stump in the front yard of Crissy’s Breakfast & Coffee Bar in Damariscotta on Thursday, Dec. 13. The car struck the building while backing up. (Jessica Picard photo)

A station wagon crashed into the side of Crissy’s Breakfast & Coffee Bar in downtown Damariscotta the morning of Thursday, Dec. 13, causing minor injuries to diners and extensive damage to the restaurant.

Ruth Piper, 71, of Bristol, was backing a 2013 Volvo XC90 station wagon out of the restaurant’s parking lot when it struck the side of the building multiple times before continuing onto the front lawn, on a rise above the driveway, and coming to rest on top of a stump, according to Damariscotta Police Chief Jason Warlick.

The police department, however, believes the cause of the crash was operator error, and that Piper accidentally pressed the gas pedal instead of the brake, Warlick said.

“When the tow truck driver removed the vehicle, the throttle was working appropriately,” he said.

Neither alcohol nor drugs are believed to have been factors.

Three patrons inside the restaurant sustained minor injuries and were treated on scene, according to Warlick. Piper was not hurt.

The incident caused “extensive structural damage to the building,” Warlick said. Debris and glass were scattered inside and the building’s electricity was out.

The restaurant reopened Saturday, Dec. 15. “We are battered but not broken!” a post on the restaurant’s Facebook page read.

The building, at 212 Main St., is owned by Colleen Kelly, of Damariscotta.

Firefighters used a chainsaw to cut the stump and set up a makeshift ramp to drive the vehicle off the stump and embankment. A crowd of bystanders gathered across the street to watch the process.

Some drivers were taking cellphone photos of the unusual scene while going by, prompting Warlick to issue a warning.

“The Damariscotta Police Department encourages everyone to put their phone down and drive safely,” he said.