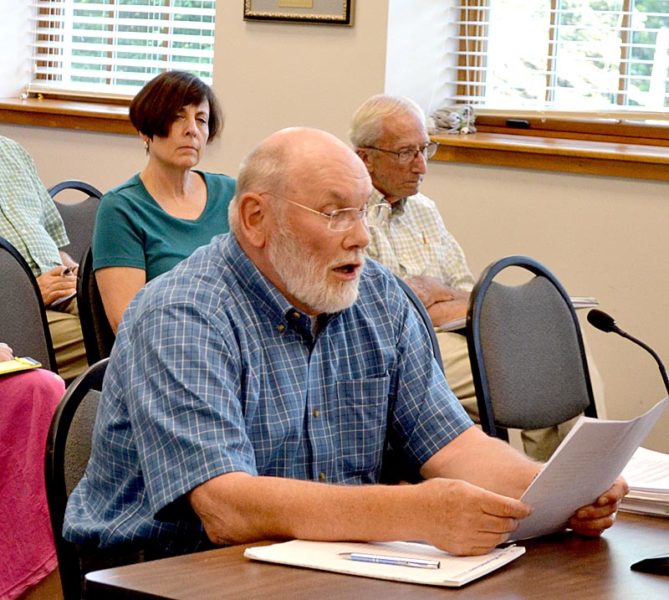 Stepping Stone Housing Inc. announced the hire of its first executive director and addressed concerns from neighbors about the nonprofit’s plans for the former Blue Haven property during the Damariscotta Planning Board meeting on Monday, July 11.

Stepping Stone purchased the property at the corner of Hodgdon and Pleasant streets in an effort to establish transitional housing for people who cannot afford to buy a home or rent high-priced units, Stepping Stone board member Bill Hain said.

During the meeting, Hain presented an overview of Stepping Stone’s plan for the property, which was originally discussed with the board in 2014.

The large main home, which was occupied by John Andrews, the previous property owner, was demolished with a permit issued by Damariscotta Code Enforcement Officer Stan Waltz. Waltz also issued a building permit to replace the structure.

A tiny home was moved onto the property and currently provides single-family housing.

Stepping Stone plans to replace the remaining structures on the property – two mobile homes, a cottage, and a small house – with three two-story duplex structures for a total of six residential units. Each unit would be 616 square feet and include two bedrooms, with the goal to house a family of four or fewer, Hain said.

Prior to appearing before the planning board, Stepping Stone President and founder Bill Howlett and Hain met with Damariscotta Fire Chief John Roberts to discuss improving access to the property for emergency vehicles. As a result of the meeting, Hain said the three duplex buildings will have a sprinkler system with remote monitoring.

In addition, the entrance to the property will be adjusted to provide the greatest turning radius possible for emergency vehicles.

Hain also announced that the board has hired Damariscotta Baptist Church Pastor Marilee Harris as the executive director of Stepping Stone. Harris will serve as the primary link between the property and the town of Damariscotta, Hain said.

During the meeting, several abutters continued to speak out against the nonprofit’s plan.

Martha Scudder, of Pleasant Street, said she thinks the project is a good idea, however, she said there should be an on-site supervisor of the units.

Harris said she lives a quarter-mile away from the property, but Scudder said that isn’t close enough.

“At the last meeting, it was very strongly mentioned there would be people with heavy baggage,” Scudder said. “I don’t think we should count on the police to take care of that. There needs to be a supervisor there.”

Residents also expressed concern about how the nonprofit screens tenants and the number of people who could live on the property. If each of the duplexes and the tiny house reach maximum capacity, 28 people would be living on the property.

Jessica Sirois, of Church Street, said that although residents were assured multiple times that tenants would be properly screened, that has not been the experience of the neighborhood.

“I appreciate that there are steps being taken, but you have to also understand that what you initiated in your promises and assurances were not followed through,” Sirois said.

We all fall into hardship at different times, we’re all deserving of second chances, but it comes with a pretty weighty set of scenarios, and I just want assurances that there is professional preparation for what this means for our neighborhood,” Sirois said.

The concerns addressed by Sirois and others in attendance contributed to Stepping Stone’s decision to hire an executive director.

“We would be the first to acknowledge there has been an example of wrong decisions made,” Hain said. “One of the things we have been doing since the last time we were before the board has been tightening our own procedures for screening people who are in these homes.”

“This organization wants to be a good citizen and a good neighbor, and we want to put people in who will not do any harm to that neighborhood,” Hain said.

A reduction in the amount of units on the property was also discussed during the meeting.

“Our request is to replace the seven living units because we think the need in the community could use that number of available living units, and if the board won’t approve that, tell us what you will approve,” Hain said. “A half a loaf is always better than no loaf at all.”

Stepping Stone would need to provide additional materials to meet the requirements in the town’s site plan review ordinance, including a survey, as well as letters from the Damariscotta fire chief, Damariscotta road commissioner, and Great Salt Bay Sanitary District.

Stepping Stone will appear before the planning board at its next meeting, which is scheduled for Monday, Aug. 8.

Stepping Stone encourages anyone with concerns or questions about the property to call Harris at 504-2393.

“After the meeting I was able to have a long conversation with some of the neighboring abutters, and I am planning to have a gathering with them to give them an opportunity to speak with me directly and share their concerns on a personal level,” Harris said.