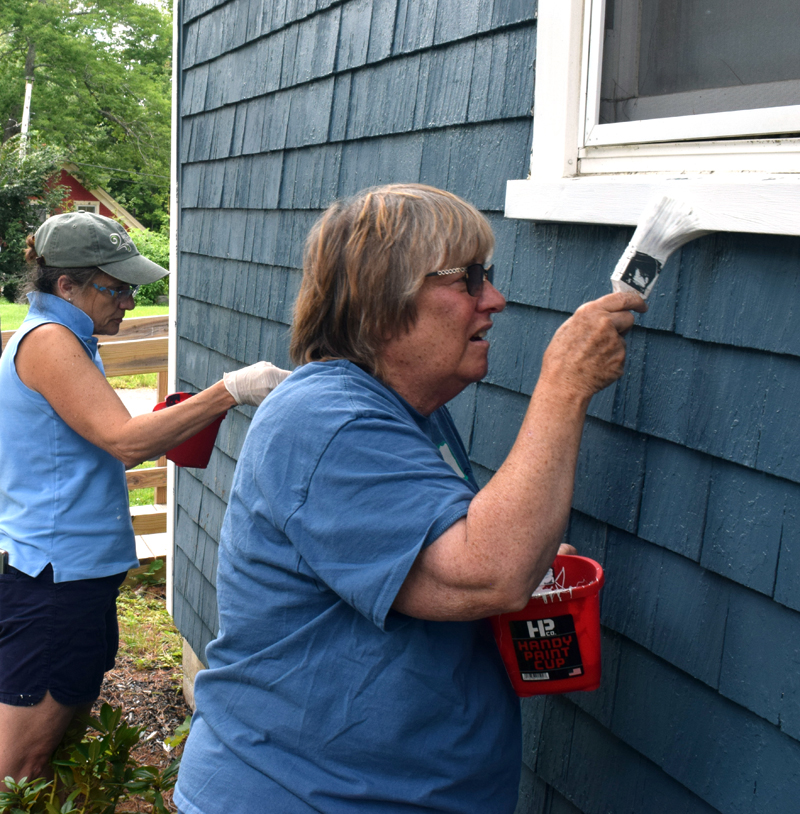 Stepping Stone Housing, Inc. is inviting the entire community to attend an open house at its newly renovated apartment building at 53 Biscay Road in Damariscotta from 10 a.m. to 2 p.m. Saturday, Sept. 18.

The Damariscotta-based nonprofit, which provides affordable local housing, will also be holding one of its monthly summer yard sales concurrently, next door at 57 Biscay Road.

Through the monthly tag sales held by Stepping Stone’s Treasurer Bruce Bachelder and his wife, Karen, the volunteer organization has raised nearly $60,000 this year.

Stepping Stone President Marilee Harris said on Saturday, Sept. 11 that the donated items are first used to supply needs in the community, furnish Stepping Stone’s living spaces, or offered to the Community Housing Improvement Program, or CHiP, Inc. and other close partners.

Volunteers working with CHiP on Community Cares Day on Saturday, Sept. 11, painted and fixed up the exterior of homes at Stepping Stone’s properties in the Blue Haven neighborhood of Damariscotta.

Blue Haven was originally owned by John Andrews, who made it available as affordable housing for years.

Bruce Bachelder said that his first home in Damariscotta was at Blue Haven when he moved there in 1977. Now he is working to continue Andrews’ mission through Stepping Stone.

Blue Haven houses seven adults and four children in six homes. The renovated building on Biscay Road houses one person currently and will soon have capacity for four more residents.

Stepping Stone also has two other properties, one in Bristol and one in Bremen, which are being rented to two adults and three children. A tiny house was recently donated and there are plans to set it up on the Biscay Road site.

Residents pay rent on a sliding scale with Stepping Stone, maxed at 30% of their income.

“Most of the tenants of working age, and not disabled, are working at least part time, often two or more jobs and close to minimum wage,” a letter to the editor from Mary and Bill Bausch says. 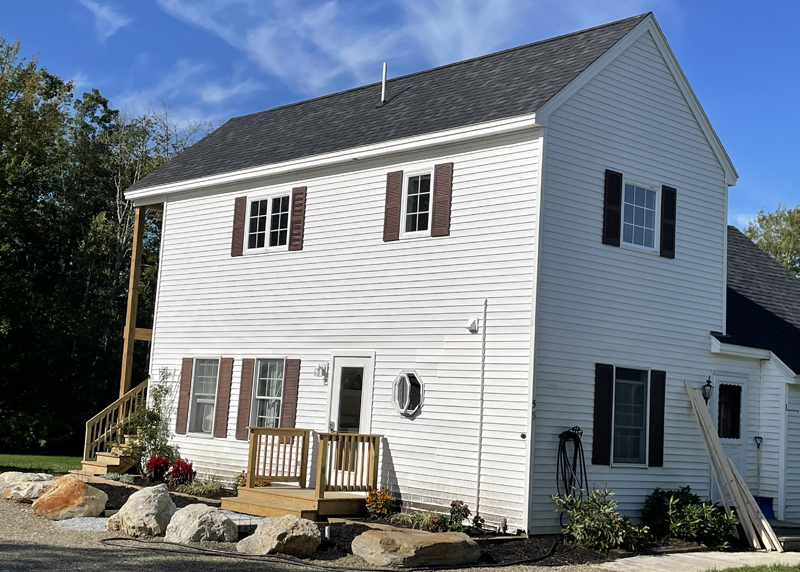 The newly renovated building owned by Stepping Stone Housing, Inc. at 53 Biscay Road in Damariscotta will host an open house from 10 a.m. to 2 p.m. on Saturday, Sept. 18. A yard sale will also be held concurrently next door. (Photo courtesy Carolyn Neighoff)

Stepping Stone Housing will have some surprise donations after an employee at the Portland-based Bissell Brothers brewery elected to have a dry-hopped saison benefit the organization.

“You Earned It is a program in which our team members take turns brewing a batch of beer on our pilot system. A portion of the sales from draft pours and cans sold are donated to a non-profit of their choice,” a news release from Bissell Brothers says.

The beer, American Aquarium Drinker, was brewed by Kevin Broydrick and was named for the first line of the first song on one of his favorite Wilco albums.

While planning to brew the beer, Broydrick contacted John Stirratt, Wilco’s bassist and a Lincoln County resident, who recommended Stepping Stone as a worthy cause to support.

The beer was served at Bissell Brothers Kitchen on Wednesday, Aug. 25 prior to Wilco’s show at Thompson’s Point.

“This local, volunteer-run, grassroots program is dedicated to helping those who earn less than a living wage find housing as a ‘stepping stone’ to a better life,” the news release says.

For more information, or to donate money or items for the yard sale, visit steppingstonehousing.org or call 563- 6297.