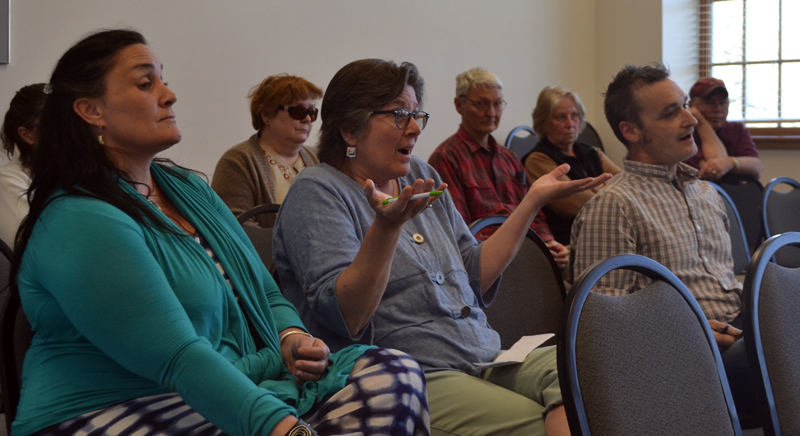 Amy Lalime (center) speaks during the Damariscotta Board of Appeals meeting Monday, April 24 as Jessica Sirois (left) and Gabe Shadis look on. Lalime, Shadis, and Sirois live near the Stepping Stone Housing Inc. property at the corner of Hodgdon and Pleasant streets in Damariscotta and are appealing the Damariscotta Planning Board’s approval of a development at the site. (Maia Zewert photo)

The Damariscotta Board of Appeals held its first meeting to discuss an appeal filed by the neighbors to Stepping Stone Housing Inc.’s transitional housing development Monday, April 24, but a decision on the matter will wait until the abutters file an amended appeal based on the Damariscotta Planning Board’s notice of decision.

The appeals board met Monday, April 24, to discuss an administrative appeal filed by Gabe Shadis, an abutter to the Stepping Stone property at the corner of Hodgdon and Pleasant streets. The appeal was signed by neighborhood residents and property owners Brooke Cotter, Amy Lalime, Patricia Shadis, and Jessica Sirois.

According to the application, the neighbors are appealing the planning board’s determination that seven units on the property are a “grandfathered use.”

After receiving an opinion from town attorney Jenny Villeneuve, the planning board in September voted 3-2 that the seven units Stepping Stone was proposing for the property at the time were grandfathered.

The neighbors filed a similar appeal in October, but were told by the town that any appeal regarding the project would have to wait until the planning board made a decision on the application as a whole.

Stepping Stone later reduced the planned number of units from seven to six. The planning board approved the project during its meeting March 6 with a vote of 3-1-1. Chair Jonathan Eaton did not vote. Shari Sage voted against the project, saying she disagreed with the decision to grandfather seven units. 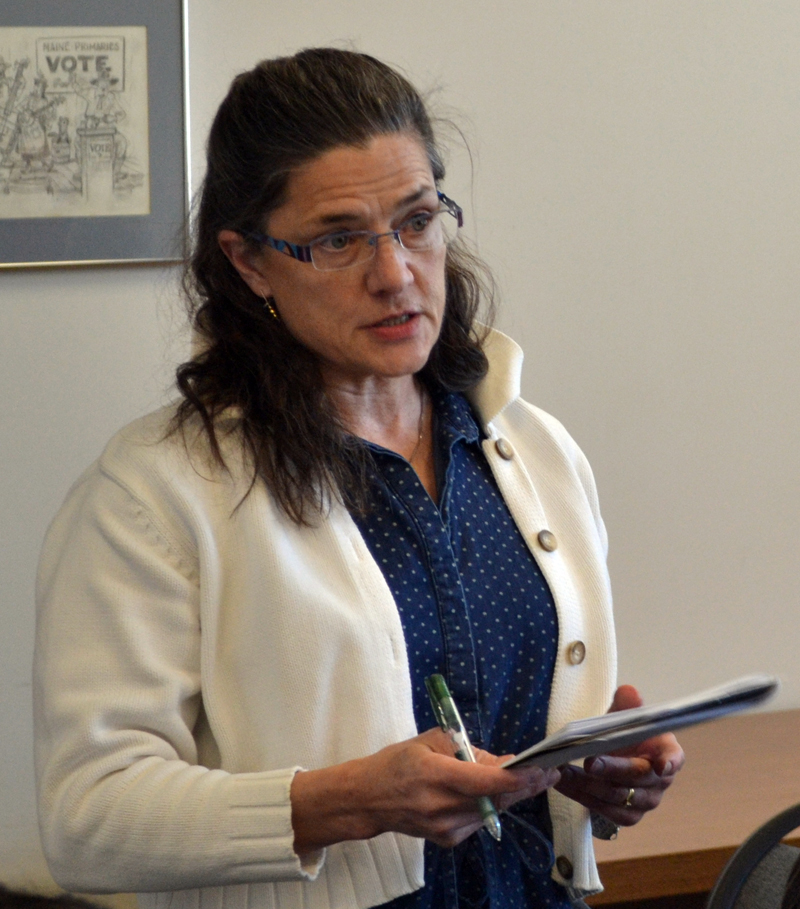 The appellants expressed a number of concerns about Stepping Stone’s plan, which calls for the replacement of five of the buildings currently on the property with five new, one-story, two-bedroom units of no larger than 720 square feet each.

One of the main arguments of the appeal was the neighbors’ assertion that some of the buildings on the property had been vacant for over a year. Under the town’s land use ordinance, if a building has not been used for residential purposes in over a year, the use has been “extinguished” or abandoned and cannot be grandfathered.

The abutters and Harris presented conflicting accounts during the meeting regarding who lived in what units on the property and when the units were occupied.

The abutters also expressed their belief that the project would have a harmful effect on the neighborhood through ongoing construction and the number of people who could live in the development at maximum capacity.

Sirois, a licensed professional counselor who lives and practices across from the property, said the noise generated from the development would have a “large impact” on her ability to provide a quiet space for her clients.

Patricia Shadis said the planning board failed to require Stepping Stone to demonstrate financial capacity to complete the project as a whole.

As part of the planning board’s approval of the project, Stepping Stone must return to the board before the construction of any of the five buildings to demonstrate financial capability to complete the construction.

Board of appeals member Bruce Rockwood said the planning board instituted a similar arrangement with Inn Along the Way Inc., a nonprofit that plans to create a senior community in phases over a period of years on the 31-acre Chapman Farm property at 741 Main St.

After almost two hours of discussion, it came to the attention of the board that the neighbors had not read the planning board’s notice of decision prior to filing their appeal with the town April 5. The planning board approved the notice of appeal during its meeting April 3.

In an effort to have all of the abutters’ concerns addressed in one appeal, the board voted unanimously to continue the meeting to a date to be determined so the neighbors can read the notice and make amendments to their appeal if necessary.

The board of appeals also expressed an interest in meeting with the town attorney about the grandfathering of the units, the issue of abandonment, and other concerns.

While the appeal process is ongoing, Stepping Stone may press forward with the construction of three units on the property, for which it holds building permits.

The next meeting of the board of appeals will be scheduled for a date when the three members are available. The board currently has two vacancies.